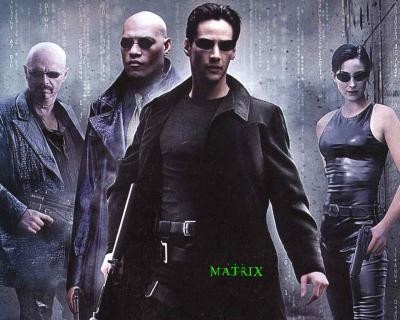 As a Warner release, the Matrix series first took the red-pill appearing on HD DVD only. But the highly rated sci-fi trilogy will finally get the full treatment as it ingests the Blu-pill this October 14 in a 7-disc Ultimate Matrix Collection on Blu-ray.

The popularity of The Matrix was practically synonymous with the DVD format itself earlier this decade. It was the first DVD to break one million in sales. Countless home theater enthusiasts bought the DVD along with the first DVD players that broke the sub-$200 barrier. Now for the first the time the classic late-90s sci-fi, cyberpunk tale will hit the latest high-def format.

It’ll set you back about $130 and almost two straight days of viewing time thanks to 35 hours of extras. If you loved The Matrix and you love your special features the Ultimate Matrix Collection will certainly deliver the goods.

The Collection includes the Matrix Trilogy, The Animatrix and three more discs filled with extras. Each film will feature Warner Home Video’s In-Movie Experience. IME is a new way of accessing relevant interviews and extras while the film is in progress.

As a fan of the first Matrix film and of a few of the anime artists featured in The Animatrix, I picked up the Matrix Collection on HD DVD. I promptly sold it in disgust when I discovered The Animatrix was only 480p. It would have been nice if they outlined this fact on the box!

The first Matrix film was great, the second and third installments – not so much. But The Animatrix features a collection of the best writers and artists in anime today doing their own surreal stories taking place in that mysterious world known only as The Matrix. The first of the nine episode collection features the most truly groundbreaking digital animation seen in 2003 and to this day represents a high-point in the art.

The Matrix films were one of Warner Bros. top franchises responsible for billions of dollars in sales through multiple media formats including theatrical, home video broadcast media and even video games. The first film stunned audiences in 1999 when computers and the Internet itself was still an exciting new industry.

It was a true neo-Frankenstein tale told through the popular cyberpunk sub-genre of science fiction (created in the early 80s by writers like Bruce Bethke and William Gibson) where people are imagined to jack-in to digital virtual worlds. The Matrix provided the mainstream platform that sprung cyberpunk into the national consciousness. Its dark consequences for reliance on technology were a cautionary tale for a new age.

The $130 price-tag might be a bit steep for one classic film and two flawed sequels. But if you’re a dedicated fan of all three and your interest is tweaked in The Animatrix the Ultimate Matrix Collection delivers sweet over-the-top excess in special features.

jostenmeat, post: 592934
Um. Does anyone have info about when the first one will be released by itself? I'd love to have the first, but I will not buy the trilogy.

Yep, it's already been released a long time ago (March 31, 2009) as a DigiBook The Matrix 10th anniversary by Warner. You know, those folder type of books with some nice pictures and writing inside, called a collectible booklet.

Lordoftherings, post: 592562
Well, some people have to be part of the exception now, isn't it?

I think HTPC is so cool now, I'm preaching it.

I think being able to play BD & HD DVD movies withOUT the need of the actual physical players is pretty good.
Lordoftherings posts on July 07, 2009 01:35

But leave it to me to be the outcast and say that I will NOT be getting the Matrix Trilogy on BD.

I already have this trilogy on HD DVD. It's also on my HTPC's hard drive.

Well, some people have to be part of the exception now, isn't it?