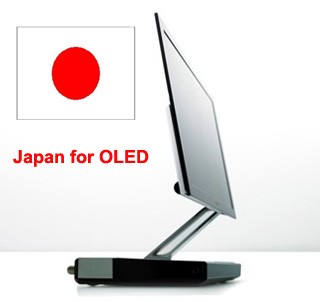 The Japanese government is initiating a collaboration of the nations top electronics firms including Sony, Matsushita and Toshiba. The goal is to get HDTV buyers of the near future considering OLED panels.

More details about the co-operative effort will be announced later. But Reuters reported just yesterday that an alliance of manufacturers has been created with the ambition of bringing OLED technology to prime time.

The project will begin its work on the foundations. Establishing the technology so as to create high-definition OLED HDTVs with screens 40-inches or larger is the first priority. The Co-operative has lofty challenges ahead.

OLED stands for Organic Light Emitting Diode, it creates pixels out of organic compounds with electroluminescent properties. It’s a bit like having a display made out of tiny living fireflies. Sorry PETA, nothing to see here – OLED is still technically just a chemical reaction.

There is no backlight needed because each pixel can light up in any of the display’s color range. This creates a significant energy savings over long-time energy-miser LCD making OLED the most energy-stingy display technology made.

Other advantages of OLED include ultra-thin displays mounted on flexible substrates. This means a display can be made a fraction of an inch thick that you could theoretically roll up and put into your pocket.

Sony already makes an 11-inch OLED monitor - and it’s only .11-inch thick! But you probably won’t see it at the local electronics stores. Its approximate retail price is well into the $1500 range. But it’s a significant start for the fledgling technology because Sony claims a breakthrough 50,000 hour lifespan for its minute panel.

With the best minds from these creative electronics firms and Japan’s Ministry of Economy, Trade and Industry contributing 3.5 billion Yen ($33 Million) to the OLED project – the display technology might become a viable reality sooner than expected.

zhimbo, post: 432774
So…when is the USA going to be at the forefront of new technology? Ever?

I can't imagine the government (US or Canada) investing millions into hybrid auto research (for instance) in conjunction with Ford/GM etc. for the sake of the environment.

Maybe a tax break.
jaydog67 posts on July 11, 2008 14:17
They are investing alot of money towards this. 3.5 Billion from the Japanese Ministry of Economy. Crazy but good, meaning they could have something out on the market soon for consumers.
Post Reply