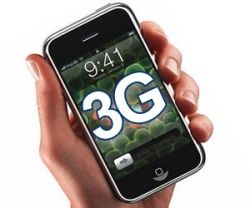 AT&T Chief Exec, Randall Stephenson let some information slip about an upcoming 3G version of iPhone to arrive next year. Apple’s tactile media phone uses cutting edge technology in nearly every respect.  Yet, it’s saddled with a slower EDGE data transfer speeds. When iPhone was released Jobs said the decision not to go 3G was to save battery life in the device. And we all know Apple’s portable devices have a sketchy battery implementation.

The real reason Apple got into the mobile business wasn’t just to sell pretty phones with tactile controls. Apple wants to be able to sell you media through iTunes no matter where you are. Greater bandwidth will mean more data products and services from Apple. iTunes is likely to deliver services like streaming video and live TV directly to your iPhone.

In mobile data networking circles 3G is considered the pinnacle. It’s not as widely available here in North America as it is over in Europe and Asia. A tally once put the approximate number of 3G users worldwide at 2.6 billion, yes, that’s billion with a B. With the iPhone’s primary market here in North America it’s clear we lag behind in mobile technology, but that’s okay – we’re catching up slowly and we have better hamburgers over here.

Expect AT&T to keep unrolling 3G from coast to coast with the highest profile device the company carries finally being compatible. So, be prepared - next year you should be able to download compressed pop-music along with those re-runs of Grey’s Anatomy faster than you probably ought to.

Read the Complete Thread
BMXTRIX posts on December 05, 2007 17:14
My issues is the same that many other have - it won't work on my network.

Voice dialing is a must, I would have to say, so that'll really need to be implemented. I'm really suprised a firmware fix hasn't taken care of that altogether as it should be really easy to implement.

As for the 3G network? I'm not sure that would matter nearly as much, at least to me, as the voice dialing… Oh, and ability to work on Verizon Wireless.
sholling posts on December 04, 2007 13:26
The iPhone seems like a cool 0.5 implementation. A pretty face but lacking must have features such as voice dialing over Bluetooth and 3G. Jobs may not have noticed but it's a cell phone and people should have their eyes on the road while driving and the lack of voice dialing defeats the purpose.
Post Reply