Why the iPhone Won’t Make it to Canada 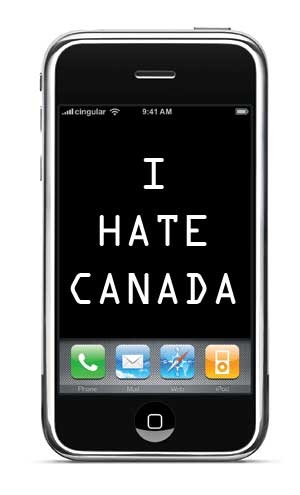 iPhone Won't Make it in Canada

Apple fanatics north of the border may have world class hockey and universal health care, but they won’t be getting the iPhone. That’s right! The nation that gave American Northeast colleges the sport of Lacrosse is in the midst of a telecommunications dark age. Canadian telcos are too fat, lazy and stupid to be able to secure a deal with a company that wants to bring a market to the nations digital wireless networks.

Languishing behind the protectionist curtain of its CRTC (Canadian Radio-Television and Telecommunications Commission) digital wireless companies in Canada are simply incapable of securing a deal with Apple. Sadly, Canadian wireless companies are only too happy with the status quo. Companies like Apple with services to offer over Canadian digital airspace will eventually conclude that the Canadian market is simply too small to fight for. Although Canadians are great consumers of high tech, there are individual States with populations that rival all of Canada.

Apple has been in negotiations with Canadian telco Rogers Wireless, owner of Canada’s widest GSM network. Apple probably had no idea the mire it was getting into trying to release a cell phone on the other side of the border. Apple could conceivably make more headway in Rwanda than in Canada.

Canada pays among the highest digital wireless rates in the world. With the blessing of Canada’s communications regulatory body the CRTC. Business blogger Thomas Purves demonstrates on his graph how, on a worldwide scale, Canadian’s are being shafted for digital network access. Fees in Canada are astronomical compared to any other country, including third world nations like Rwanda.

The stiff profit margins of the Telcos ensure wireless data is rarely if ever used by the private sector in Canada. Casual use of a handset for Internet access will regularly incur bills in the hundreds or even thousands of dollars per month. It has the net effect of oppressing the use of wireless technology in Canada.

The long term effect can only be less innovation and less competitive businesses because private citizens and small business simply can’t afford to use digital wireless networks.

The corruption of Canadian telcos is so bad that they freely engage in bait and switch practices that have long been outlawed in the US. They call it the System Access Fee (SAF).

Canadian Telcos have long been charging consumers SAF and implied it’s a tax levied by the Canadian government. Today they still call it a fee but it’s really just the classic bait and switch and every Canadian telco uses it.

The Canadian telcos (Rogers, Bell and Telus) publish a monthly data plan in an advertisement in the local paper as bait to consumers. When the consumer tries to take the telco up on the published offer they switch the price. Americans are protected from this crooked practice outlined by the Federal Trade Commission’s Initial Offer regulation outlined in – Sec. 238.2.

Apple isn’t the only company frustrated with Canadian Telco price fixing collusion. Canada’s own mobile success story, RIM out of Waterloo Ontario has railed against Canada’s mobile providers. Google is also interested in finding an amicable agreement with carriers in Canada for its own utilities and possible gPhone. As it is now the ridiculous data rates restrict any meaningful market penetration by technology developers.

Apple was able to negotiate a deal with AT&T to release iPhone with an unlimited data rate at around $40. AT&T agreed to this rate because it closely approximates what it already sells unlimited access for. But this isn’t so in Canada where unlimited mobile data plans don’t exist. A Canadian would rack up a bill in the thousands of dollars using what would only cost $40 in the US.

Manufacturers like Sony, Apple, RIM and soon Google if its gPhone arrives, aren’t simply in the business of selling hardware. Each has a vision of universal wireless access to its stores. This vision is squelched when providers take more than its share of profit margins. It has an oppressive effect on free enterprise and the CRTC is there to ensure competition to Canada’s existing GSM and CDMA networks is scarce.

The sad thing is that more businesses will decide it’s just not worth the fight to try and make it north of the border.

Pretty smart for only 20 years of age .
Wayde Robson posts on October 13, 2007 12:43
Canadians can buy an iPhone from the US and unlock it obtain an SIM and subscribe to Rogers GSM network to activate it.

You have to do without the special AT&T voice mail scrolling feature. So, it will work in Canada. But it's a grey market, Apple certainly doesn't approve.
Panjsheri posts on October 12, 2007 19:36
Sorry to intrude on your parade but I am from Toronto and I can tell u this for sure that we already have the Iphone and it may have been a little later than the US release but that is expected. Event Blackberry which is a Canadian invention comes out in the US before it gets out to the Canadian market. Im sure if we had a population of about 300M then we would get it the same time but the market in the States is bigger.
Sheep posts on October 12, 2007 17:07

Xander, post: 319099
Let me first say that I haven't owned a cell phone in 3 years. It made no sense for me to replace it as I used it so little. I do understand the point that is made and I don't disagree with the concept that similar services should be available for a similar price. My own feelings on the matter though are that these capabilities which are so expensive here in Canada are not really that important. All I want from a phone is the ability to make a phone call. You can't get a phone like that anymore. The rest is just extras I don't want to pay for.

My thoughts exactly. I'm 20 and I have never owned a cell phone. Am I in the majority? Not for my age. But I don't have people bothering me 24/7 where ever I am, whenever they want.

SheepStar
davidtwotrees posts on October 12, 2007 16:55
Wayde. Excellent response. In the article you didn't mention that you were Candian. Although I share audiophyte Xander's philosophy above-I just want a phone that's a phone. I could care less about videos and cameras and all the other junk they are trying to unload. Technophiles all assume the rest of the masses want technophilia.
Careful in your longing for the capitalist consumer culture, you might just get what you wish for!
Post Reply