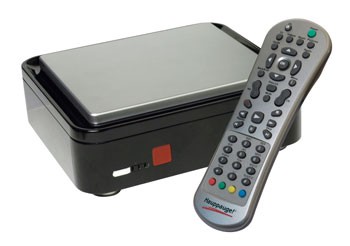 Life just got better for DIY HTPC’ers. Hauppauge, the gold-standard in video capture cards for your PC, just released a new beta driver that provides 5.1 audio support for its HD-PVR.

It has been hailed as one of the products of the year and a boon to HTPC builders. Not since TiVo has an A/V product so blatantly risked alienating the studio HDCP establishment by providing consumers with the tools to do what they really want to do - Record and consume high-def content when and where we really want.

By sneaking through the analog (component) output of your HD set-top-box, the Hauppauge HD-PVR can record, pause and rewind programming on your PC. It stores all this audio/video as compressed H.264 on your computer’s hard drive. Armed with a media extender like Hauppauge’s own SageTV you can stream this HD goodness back to your Home Theater system.

Until today recordings made with your Hauppauge HD-PVR have been saddled with stereo-only audio. A new driver released (Sept. 30) gives you full AC3 (Dolby Digital 5.1) surround sound and AAC audio.

The only drawback up until now has been incomplete audio. But no more, now that the HD-PVR can do 5.1 audio it may peak the interest of those fence sitters among us.

Although it’s a good deal in A/V component terms, it was a tough call for some to justify the $200 price-tag on the HD-PVR that doesn’t record 5.1 audio. If you’ve already got a set-top HD-PVR you know how indispensable they’ve become. Lack of Dolby Digital has been a severe limitation on the HTPC solution. That is until now!

admin, post: 464048
Life just got better for DIY HTPC'ers. Hauppauge, the gold-standard in video capture cards for your PC, just released a new beta driver that provides 5.1 audio support for its HD-PVR.

Hi!
My first official post here. I'm considering getting one of these. Here's the $50,000 question I have—
Would anyone be able to tell me if the native format that this uses to record is directly compatible with a Popcorn Hour, meaning, no conversion or trans-coding necessary?
I love my little PH, and this looks like it would make for a perfect match to it if it records in the formats that the PH supports.
kleinwl posts on October 06, 2008 17:59
I've got one of these recording out of Time Warner Digital's Scientific alantic boxes. It works well on SD, but stutters recording HD. I'm not sure what's needed to fix that yet.

The main complaint that I have is that it requires componit cables, since that is so much messier than a nice HDMI cable. Oh well, the ability to record without worrying about TW's DVR is worth it.
Post Reply