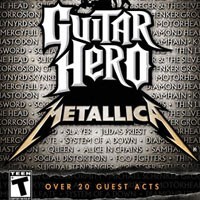 If there is one thing makers of popular video game franchise Guitar Hero should know, you’d think it would be their classic rock bands. But that knowledge didn’t stop a small goof from appearing in the cover art for the yet-to-be-released Guitar Hero: Metallica, which incorrectly lists “Lynyrd Skynrd” as a contributing band.

A sharp eye at Rolling Stone magazine was the first to catch the error when screen shots of the new cover were released, but no one will hold it against you if you saw the cover and didn’t spot it. The ‘70s Southern band who gave us the unforgettable hick-rock anthem Sweet Home Alabama crams so many extraneous “y”s into their name that reading it correctly requires Magic Eye prowess.

The actual spelling is L-y-n-y-r-d -S-k-y-n-y-r-d, for a grand total of 4 of everyone’s favourite questionable vowel. The band was originally named Leonard Skinnerd, chosen as a mocking tribute to former high school gym teacher Leonard Skinner, who gave the band members and other male students a hard time about their long hair. The current alphabet-soup spelling was adopted before the band released their first album.

Fortunately for the art department at Guitar Hero, Skynyrd was the only typo on the cover. Other contributors like Judas Priest, which has that tricky “ie” combination, and purposely-misspelled band Mercyful Fate made it through Guitar Hero’s low-tier spellcheck unscathed.

In terms of scandal the typo is pretty small scale, and Activision has already made the fix with plenty of time to spare before the game’s March 29th release date. Gamer outcry is minimal, as most Guitar Hero fans are too busy flexing their fingers in anticipation of Metallica’s Enter Sandman and The Unforgiven to care about spelling.

Even Lynyrd Skynyrd fans and the band members themselves are staying mum on the subject. We’ve yet to find any news springing up from them in the headlines or on the official fan site.

Still, we’re pretty sure somewhere out there, Neil Young is laughing.