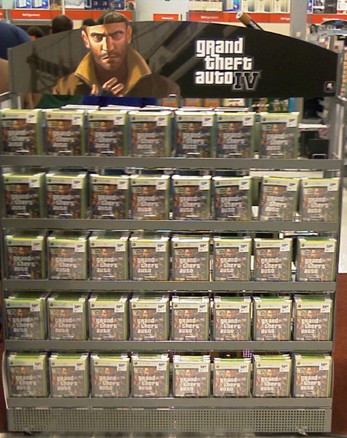 The buzz over what’s speculated to be the top selling video game of the year was palpable last night. All over North America Grand Theft Auto IV went on sale at the stroke of midnight. Game shops and electronics stores opened starting at midnight for one hour to give sales a running start.

I attended a local GTA IV midnight madness event mostly out of curiosity to see what kind of people would attend such a thing. This was a video game release, not limited ticket sales for a soon to be sold out concert. There were no known 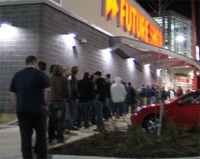 shortages of Grand Theft Auto IV when it went on sale. There was no chance speculators would be able to cash in on eBay when they took home their copy of the game.

People who stood in line, in many cases for hours, all across America last night did so for one thing: love of the game. That’s a surprisingly idealistic notion for such a decidedly cynical video game.

Rockstar Games is no stranger to controversy over its unique strain of video games that have been much loved and ‘oft maligned lately. The Grand Theft Auto series has borrowed a pinch from the open-air freedom of fantasy role playing games (like Oblivion) and added it to a universe that exists at the crossroads between Film Noir and The Godfather. GTA IV seems to epitomize our cynical times.

But my question when attending the midnight sales event of the game was - what kind of cynical young adults would sit outside a store at midnight waiting to get copies of this kind of game?

crowd or the fantasy paint-your-face group of Orcs that attend gaming conventions. But those I saw camping out in front of the store since hours before the doors opened at midnight possessed a dedication that rivaled all.

As I stood in line, myself un-immune to the spell of one of the most hotly anticipated titles in recent memories, I listened.

It turned out the crowd consisted of a cross-section of unusually regular people, mostly males in their 20s and 30s. Some were students most were workers and many parents themselves. They talked about classes, jobs, kids and the mild golfing weather we’ve been blessed with lately.

These people crowding in line didn’t seem at all to be the fantasy fanatics or jaded anti-heroes like Nico, star of GTA IV. The lines last night were filled with average people who shared an infatuation with a video game.

Brucie cracks me up, because he's such a roids ridden retard.
aberkowitz posts on May 01, 2008 10:23
What I like most about the physics is that when you crash a car into an object at 100 mph you actually go flying out the front windshield!!
Wayde Robson posts on May 01, 2008 08:33
I find the cheeky humor interesting. It's been a pretty fun game so far and I think the depravity that is “possible” in the game is no more than a lot of ‘fantasy’ based RPGs that don't get this kind of attention.

Yes, it is an adult game. I wouldn't even play with my kid around. But it's fun and has a real wit that I can certainly relate to.

That line just made me laugh out loud. They make fun of the new age, celebrities and both sides of the political spectrum. It's certainly not a dumb game.

And.. oh yeah, it's a game too. Sometimes the in-game physics aren't the greatest. You bump into people too easily or fall off things. But overall they did a great job at making virtually everything in the game react to you in a somewhat realistic manner.

The sheer number of cutscenes makes it infinitely entertaining although just a little more linear than something like Oblivion. It's well acted and the dialogue is smart yet not too smart, it's realistic.
Djizasse posts on April 30, 2008 09:09
I've been a player of the GTA series since the first one. Even though the game is violent, it has a kind of uplift tone to it. The radio stations, dialogs, caracters, missions, scenarios, sound, etc., have a humourous touch. Everytime I play the last installement (San Andreas) I get a good laugh (ex: the “Maria” missions).

Another good thing about this series is that each new installment improves on many aspects. GTA IV is no exception, it even has multiplayer.

This is a game made (also) for grownups. It has violence, sex, humour and good playability. No wonder you see “normal” people in line waiting for it I would too, if I had a 360 or a PS3 :\
Post Reply