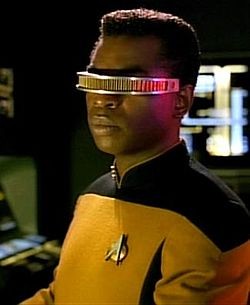 Researchers from an interdisciplinary team at the University of Illinois at Urbana-Champaign (UIUC), and Northwestern University (NU) in Evanston Illinois have developed a functioning, miniature replica of the human eye that is based on a curved image sensor.

Naturally occurring eye structures, such as the human eye, are based on simple systems with a single lens that projects onto the curved surface of the retina.  These systems produce wide angle fields of view with low levels of aberration and a uniformity of illumination that are difficult to reproduce with existing optoelectronics technology.

The human eye has an effective resolution well into the hundreds of megapixels over a 120 degree field of vision using a single lens.  Considering that human eye has a visual acuity of 0.6 arc minutes over a bidirectional 120 degree field of vision and the minimum of two pixels to define an image change, the effective resolution of the human eye works out to 576 mega pixels for a camera to produce an image with an equivalent level of detail.

These impressive specifications are due in part to subtle eye movements, microsaccades, that occur in 0.2 degree increments many times per second.  The shifts are integrated into a single image by the brain, raising the effective image resolution.

Current imaging technology is based on flat image sensors, derived from current semiconductor manufacturing technology, which is limited to flat surfaces.  This creates a problem for a lens that is necessarily curved to bend and focus light.  Simple optics based on a single lens will produce increasingly distorted images away from center when projected onto a flat sensor.  To overcome this, a more elaborate system of lenses can be used to flatten the image and minimize distortion, but this requires space, which limits the size of cameras that produce good image quality.

The researchers were able replicate the curved design of naturally occurring optical systems using current flat electronics manufacturing techniques coupled with some clever engineering.  Semiconductor materials used in electronics are brittle and typically rupture at low strains of just a few percent.  The transition from a flat to hemispherical surface will generate strains on the order of 40%, far exceeding the material limit at the small radius of curvature in an eye.  To overcome this problem, a mechanical strain relief system was built into the system.

The design consisted of 256 image sensor circuits in a 16x16 array, each at 100 micrometer square, etched with standard methods bonded onto a hemispherical elastomeric membrane that has been put into biaxial tension and stretched flat.  Between the sensor circuits, the silicon was completely etched away leaving thin metal strips interconnecting adjacent imaging circuits.  When the tension is released, the membrane returns to nearly its original shape while the metal strips are allowed to buckle away from the membrane to relieve stress on the silicon imaging circuits.  The imaging circuits are then adhered to a hemispherical glass substrate of matching curvature creating an assembly that is but 2 to 3 cm in size.  The hemispherical imaging array was then fitted with a hemispherical cap utilizing a single lens.  The imaging array assembly is finally mounted to a circuit board with a perimeter bus connected to external control circuits.

The imaging system was then tested using a standard eye chart for a stationary condition.  Testing was also performed by scanning in 0.4 degree increments over +/- 2 degree sweep bidirectionally, similar to the human eye, that revealed substantial increases in effective resolution over that of the basic 256 pixel array.

Use for such technology is obviously wide ranging with some of the most exciting options in both eye replacement and enhancement.

Repair of lost or deteriorating vision is now one very significant step closer.

So, here’s winking at you Steve Austin.  And as for you Geordi La Forge, it looks like you will not have to wear that VISOR after all.

Read the Complete Thread
Adam posts on August 22, 2008 19:07
Very cool! Thanks for the article. Ahhh, my alma mater, U of I. Perhaps if I had worked on something cool like that while I was there, I wouldn't have this mental image of the engineering campus being a mind-numbing, ball-busting barren wasteland that made my skin crawl.
Post Reply