World's Smallest Projector - In Your Eye! 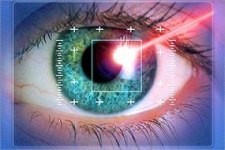 We all like small. I mean, come on - thinner TV screens, smaller parts for a more compact design... About the only thing we don't want small is our diagonal viewing area - assuming I'm not talking about certain spouses that is. Well, they've finally gone and done it. The world's smallest projector was successfully created and tested - and it fits in your eye. This machine lets partially blind patients read and explore virtual buildings by projecting images directly onto their retinal cells.

Now, I know this is for the legally blind at present - but just consider the possibilities! We've all heard about how putting a 1" LCD in front of your eye (via glasses) give you the equivalent of a 20" screen. Well, what if we BEAMED the image directly on to your eyeball - I mean, we're talking the Sears Tower in terms of size here...

The developers of the tiny projection system say the machine could let thousands of people who suffer degenerative vision loss - as a result of glaucoma and macular degeneration, for example - read books and familiarise themselves with the layout of a new building before visiting it for the first time.

I say, let's move forward - I mean, certianly the REAL money has got to be in home theater, right? (unless there is some sort of military use I'm not thinking of...) Work began on this "Retinal Imaging Machine Vision System" (RIMVS) over 10 years ago and the latest version now costs less than one-twentieth of the original price. If we assume the same depreciation as LCD and plasma TVs that means that by 2025 they will have to PAY us to install them. So far the projection system has been successfully tested on 10 partially blind subjects in the first pilot study.

The RIMVS is based on a diagnostic tool that dates back to the 1980s called a Scanning Laser Ophthalmoscope. This instrument projects a laser onto the back of the eyeball to test whether any light-sensitive retinal cells may still work. Presumably, this would also determine the maximum size of your big screen eyeball TV - but remember, we're extrapolating here.

When Elizabeth Goldring, a poetry professor at MIT in Cambridge, Massachusetts (who has led development of the machine and is partially blind herself) had her optometrist use one to probe her eyes, she realised the potential of the device for people with vision loss. The new RIMVS is a similar system but less expensive since it uses an LED instead of a laser. The cost savings went down dramatically, from $100,000 to $4,000. Now that's progress.

The RIMVS machine consists of a box about the size of a thick laptop, which is connected to a PC. A user looks into the box via a viewfinder and images are then projected onto the back of their eye. LED light is directed, via a series of lenses, through a partially transparent LCD, controlled by the PC. The LCD can generate images at a resolution of 640 by 480 pixels in 8 different shades of grey. I'm thinking we need to quickly enhance the technology to 1920x1080p, but this is just a starting point, so I think we can cut the developers some slack here.

Subjects were shown 10 "word images" consisting of words with certain letters replaced by graphics. For example, the image word "book" had an image of a book in place of both of the two middle letters and the word "fur" was written with the texture of furry skin. But the device can also be used to display ordinary words... like "That'll be $4,000. Please pay the receptionist up front."

On a More Serious Note

In the pilot study, six out of the 10 patients interpreted all 10 "word images" correctly. Two patients interpreted nine out of 10 correctly and two correctly identified eight of 10. Without the machine all the patients were too blind to have any hope of reading. This is really a great advancement, and while we joke about it's future use as a home theater device - it's only because scientific discoveries so often pave the way for less critical uses of technology.

In fact, a similar type of retinal projection technology could one day also be used to create more innovative display systems for those with good eyesight. One such device, called the Virtual Retinal Display, has been developed by researchers at the University of Washington, Seattle, US. This also uses an LED to project images on the back of the retina. It was developed as a compact video display system as well as a tool for people with vision problems.

Big screen TVs being projected onto your eyes? Hey, it may not be as far off as you think!