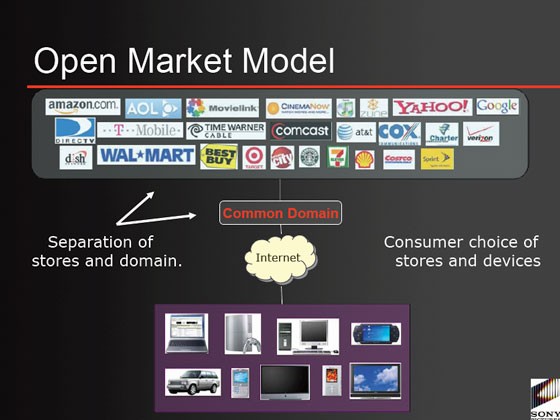 Rumors of the demise of Digital Rights Management have been greatly… well, you know how it goes. At a time when it looked like DRM was drawing its last gasp - a new consortium of manufacturers, retailers and digital content providers want to stick it to iTunes.

It’s called the Digital Entertainment Content Ecosystem. Despite the name it’s not a new plan for greener, more eco-friendly electronics. It’s a framework designed to make various digital formats and DRM schemes unite under a single banner and just get along. As its slogan promises: “Buy once, play anywhere.”

If the DECE succeeds there’ll be no more compatibility worries. That downloaded song or episode of Grey’s Anatomy should work in a variety of devices including your PSP, laptop or your car stereo – no matter where you bought it. The plan is to unite all the formats, digital content and devices under one DRM umbrella so your choice in consumer electronics or retailers isn’t akin to swearing a blood-oath to some corporate master.

It has been the plight of early digital entertainment adopters, you’ve been locked inside the consumer electronics concentration camp of your choice. Pick Sony, Microsoft, Apple, or Zune and don’t get me started on streaming files – each has its own standards or DRM format and none are compatible with the others.

But such a consortium, no matter how high-minded, is only as good as its members. You can call it a universal standard of content protection but unless it’s universally adopted it’s just another divider between devices and formats of digital content.

In the music industry, Microsoft’s DRM 10 (ie PlaysForSure, Certified for Windows Vista, or "whateverwenamedithisyear") scheme spread across many MP3 players that wanted to compete with iPod. Sony decided not to play with Microsoft’s DRM 10 scheme and went with its own proprietary format of music file called ATRAC3. Of course Apple, the master of digital online entertainment, had its own DRM called FairPlay that rendered its music files useless in all but its own Apple brand products. If that wasn’t confusing enough, Microsoft decided the rest of the DRM-laden MP3 player industry couldn’t compete with Apple so it decided to release its own device called Zune that used its own unique format that wasn’t even compatible with its own DRM 10 – PlaysForSure scheme.

Conspicuously absent is Apple and it’s no mystery why. One could argue that the creation of the DECE alliance is an effort put forth by the rest of the industry to throttle Apple’s dominance in digital content – especially now that the stakes include digital high-definition video content.

You’ll get little argument from any digital consumer on that statement. But it only sucks because we know it's there. The “Buy once, play anywhere” model has been a long time in coming. While the music industry embraces a DRM-free model, it’ll be a long time before movie and TV studios do the same. Maybe DECE is their way of avoiding the music industry's gravest pitfalls.

Read the Complete Thread
Wayde Robson posts on September 18, 2008 19:02
But this DECE isn't limited to music, it's real purpose (I believe) is to DRM your movies and TV shows without compatibility issues music suffered for so many years.

Now that many sources of music are DRM free, DECE isn't much of an issue for it. I believe DECE's real purpose is the rest of the industry ganging up on iTunes.
jnmfox posts on September 18, 2008 16:01

3db, post: 457981
I lost interest in digital downloads a long time ago. I rather have something tangeable like vinyl or CDs. The digital downlaod stiff is overlly compressed and I think paying $.099 per song is a complete rip-off considering that you get nothing with the file.

Typically I'll download my music and if I like it enough I'll go get the CD. That way, like the above poster stated, I can have it in a high quality format and play it on whatever device I choose.
hodedofome posts on September 18, 2008 10:51
I use Amazon for music downloads as they are higher quality than iTunes and all mp3. I've also been known to purchase music downloads and then download the higher quality torrent so I don't feel bad for ‘stealing.’ I need to play songs through my 360 as well as my iPod, so everything needs to be unprotected mp3 for me. This way the content provider gets their money, and I get what I want too.
3db posts on September 18, 2008 07:35

admin, post: 457980
Rumors of the demise of Digital Rights Management have been greatly… well, you know how it goes. At a time when it looked like DRM was drawing its last gasp - a new consortium of manufacturers, retailers and digital content providers want to stick it to iTunes.

I lost interest in digital downloads a long time ago. I rather have something tangeable like vinyl or CDs. The digital downlaod stiff is overlly compressed and I think paying $.099 per song is a complete rip-off considering that you get nothing with the file.
Post Reply