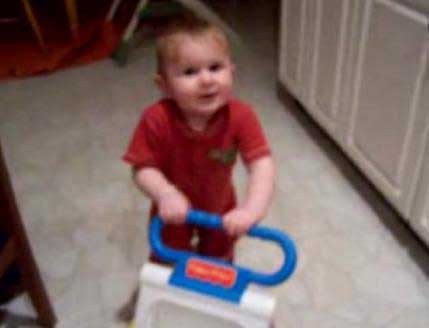 This just in from the "They Can't Possibly be That Stupid Department"... Universal Studios is being sued for forcing YouTube to remove a personal video of a baby dancing to Prince's "Let's Go Crazy" tune in the background. Yes, they got caught being unreasonable and now it's turning into a lawsuit so that they hopefully learn to not do this again. Maybe, if this happens - a lot - then perhaps somebody in a suit will finally get a clue.

What happened is that Universal, copyright owner to "Let's Go Crazy" apparently found the video online and quickly realized that, hey - this kid didn't pay for the rights to use this song online! They quickly asked YouTube to remove the video and YouTube complied. In case you've been hiding under a rock of late, YouTube is being assaulted left and right by copyright and use violation-based lawsuits. They aren't exactly in a position to deny removals and probably don't even take a terribly long amount of time to investigate each request if it comes from a known source.

To their credit, YouTube reposted the video once the lawsuit (and ridiculous nature of the request) became more public. Kudos to them.

So what is the nature of the lawsuit? Well the Electronics Frontier Foundation (EFF) is backing the mother and alleging abuse of the DMCA (Digital Millenium Copyright Act) and asking for damages and injunctive relief to make sure that Universal doesn't bring additional copyright claims against the mother down the road.

This seems to be happening more and more of late, with record labels and copyright holders getting more nervous and trigger-happy in the wake of a changing market. In my opinion they simply have no idea what the landscape will look like in 5 years and are trying desperately to keep the status quo instead of embracing the future and being a part of it. As a result, the future will likely see them in a somewhat reduced role. Just look at Universal's attitude with Apple Music's iTunes Store to get a picture of the frightened stance these companies are taking to "protect" their rights.

MDS, post: 290389
Even with ‘fair use’ there has long been a prohibition against public performance of copyrighted material. So while it is fair use to make a copy of a disc and give it to your friends, it is not ok to charge admission where you will be playing a copyrighted work; ie you cannot make a copy of a concert DVD and charge people to come to your establishment to view that concert.

Maybe Universal is taking that angle - that using copyrighted music as background music for a video that millions could see equates to ‘public performance’. I think it is a stretch. I mean what's next? Sueing people for playing a song at their wedding because there are 100 guests?

It happens. They're called ASCAP fees and they file lawsuits almost as often as the RIAA. A couple of years ago a guy got sued for singing HAPPY BIRTHDAY at a big televised event…it turns out that the lyrics to Happy Birthday are still under copyright, and you have to pay royalties to SING IT YOURSELF in any kind of public venue. That includes weddings.

Joe Schmoe, post: 291038
Sure, that is an extreme example, but who decides where we do draw the line?

Profit must come into the picture.
Joe Schmoe posts on August 01, 2007 12:50
Suppose I am shooting a home video in the yard, and a car goes by with a loud stereo. Do I have to pay royalties on whatever song they were playing?
Sure, that is an extreme example, but who decides where we do draw the line?
Rock&Roll Ninja posts on August 01, 2007 12:16

MDS, post: 290389
I mean what's next? Sueing people for playing a song at their wedding because there are 100 guests?

Party DJs are already legally required to pay royalties. (of course nobody does)
MDS posts on July 31, 2007 02:27
Who knows? I think their position is indefensible. I'm only offering one possible reason they could possiby think they have a case. Like I said, I think it's a stretch.

The RIAA and member companies are working very hard to alienate their customers and doing a bang up job of it.
Post Reply