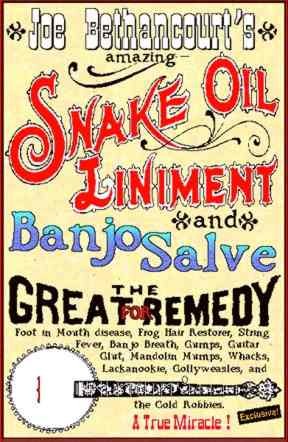 We like to rant, but rarely does a rant result in some pretty productive "put your money where you mouth is" results as it did this week. Dave Clark, Editor of now-disgraced audio review publication Positive Feedback Online described, in his recent review,  a $7,250 pair of ANJOU speaker cables as being "... way better than anything I have heard..." He then, in a not-so-rare example of audiophile thesaurus-crunching loquacity, "Simply put these are very danceable cables. Music playing through them results in the proverbial foot-tapping scene with the need or desire to get up and move. Great swing and pace--these cables smack that right on the nose big time."

Danceable. That's a new one on me. I wasn't aware the music style of choice for audiophiles was 70's disco or hip-hop, but far be it from me to label these people. I do know that something smacked him on the nose, however it wasn't these cables. It was a challenge by James Randi, who considers the art of cable science to be a form of paranormal belief, that pits $1 million against anyone who can demonstrate the ability to discern a difference between these $7,250 cables and a set of Monster Cables. Dave Clarke, of course has not stepped up to the challenge, neither has John Atkinson of Stereophile. These two are accompanied by Sylvia Browne, Dr. Brian Josephson, Uri Geller, Dennis Lee, John Edward, James Van Praagh, George Tice, and Ben Piazza, among others who have refused to take the challenge.

Personally, I think that's stupid. Based on our own research it is often quite easy to tell the difference between esoteric cables and a baseline product - at least with some models. Some esoteric cables measured so poorly they were practically analogue EQs. Any golden ear worth his salt will be able to tell a rolled-off high end in a heartbeat during ABX testing and the $1 million would be won quite handily. On the other hand, some esoteric cables measure almost as good as 12- gauge zip cord - and those will be all but impossible to distinguish.

Granted, the challenge is tough and the parameters favor James keeping his money (duh), but if these golden ears are as good as they say, then they should be willing to figure out a compromise.

In my opinion, the audiophile community should be DEMANDING that their heroes step up and take James' money. I mean, what better way to win the argument once and for all than to take a $1 million prize and rub it in the faces of all the skeptics.

So if you're an audiophile get cracking. Send out those emails. Get your editors and writers to take this challenge. It's simply an excellent opportunity to shut us up and win this cable debate quickly and completely.

Read the Complete Thread
AdrianMills posts on November 19, 2007 00:23
As a direct result of the Randi challenge some of the guys over at AVS put together a cable test involving Transparent Opus (43K US$ per 25' pair) vs some monster.

If any of you guys contribute to it over there please try to keep it civil; the entire thread that it was spawned from is probably the longest cable debate thread ever that’s managed to stay open and it'd be a shame to have it closed.

Prairie Rattlers are good 'cept the highs can be noisy, King Cobras, well, they pack a wallop, gotta use extra tape, good for “bright” sounding amps, anacondas, great for those looooong HT runs. You got the gist.
Marshall_Guthrie posts on October 09, 2007 11:58
I breezed through real quick, but didn't see it mentioned: Michael Fremer has accepted the challenge.

In my opinion, this is great. I've met Michael, actually, I interviewed him in Episode 6. The guy's hilarious, and a little nuts. I don't always agree with him, but I like him.

I'll say this, if there is a difference, Michael will hear it. What I think is more likely though, is that Michael is going to take great issue with the methodology, and ultimately create a drama-filled test that, regardless of the outcome, he will get a lot of attention writing about.

My money is on no noticeable difference, unless the Pears are doing something in the way of coloration, but god love Michael for going where angels fear to tread.

Clint DeBoer, post: 317751
If it's the type of esoteric cable with high frequency roll-off (called “warmth” by some, we call it “inaccurate”) due to inductance then he should win a cool million… Randi didn't do his research on this one. Cables DO sound different - if one of them is made to measure poorly. Now if he somehow has to prove it's “better” that's a different story altogether.

Apparently it hasn't any more roll off than normal 12 gauge although they try to twist that with graphs comparing their cable against a “competitors”. Of course they've probably used the worse possible cable from a competitor that they could find

Still, it will be interesting to see the fallout whichever way the test will go - my guess is that audiophools will continue to believe no matter what as they did after all the Stereo Review ABX testing that was done in the 80's.
3db posts on October 09, 2007 10:47
Strat..What kinda snakes do you recommend?

stratman, post: 316241
You guys know that the best interconnects are snakes, that's right live snakes. I've used them for years, nothing sounds better, just grease them with pig lard and shove the tail in, the head…..well that's tricky, you need some duct tape and a piece of rawhide, once the critters are connected you'll swear your in music nirvana.