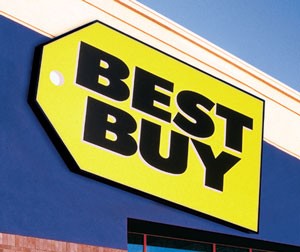 Whenever a couple goes to the shopping center it usually pans out like this - the guy makes a b-line for the Yellow and Blue warehouse while the significant other goes for more feminine fare. But now Best Buy wants to buck that trend with new designs they hope will call to the fairer sex. Is Best Buy betting women love tech after all? Or is the company telling us who really makes those leisure-time investment decisions.

The largest consumer electronics retailer is beautifying several new locations in the Denver area with an eye to a feminine appeal. Expect the bold Yellow and Blue to be softened with earth tones and even sky-lights. Taking a page from smaller mom-and-pop TV shops, the big-box retailer will show big-screen televisions in living-room settings. It’s a proven method that gives shoppers a feel for viewing among the comforts of home.  Best Buy even went so far as asking female customers to contribute ideas for making its stores more girl-friendly. Perhaps Best Buy is on to something by enticing a new demographic during this period that is sure to be tough on retailers.

You know the old saying: It’s easier to ask forgiveness than permission. It’s the oft’ used motto among those of us who have made questionable decisions to buy a pricey tech-toys in the absence of spousal approval. But are women really the consumer electronics ogres many guys make them out to be?

There seems to be a growing number of women who get a rush at the sight of a large flat screen HDTV and that thump-in-the-chest from a well honed surround audio system. Is it a generational thing for the under 30 crowd perhaps? Sure, women might not be as interested in the nuts and bolts of audio channels, high-definition resolutions and refresh rates. But most women recognize and enjoy great picture and sound quality when they have the opportunity to bask in its seductive glow.

Semi-Relevant Personal Note: As I write this I am in the computer-office (pretty much for the evening) while my girlfriend is over with her friend looking at wedding and baby pictures off an SD memory card fed into my 58-inch plasma. Not once have I been asked for help, nor do I expect to. I admit I’m impressed as it would never occur to me to use that feature that is so common in HDTV today.

I think there are younger women that like tech. It was a true story about my girlfriend using that SD memory slideshow feature on the TV. If a friend came over wanting to show me pictures I'd probably sit there squinting into his camera's display - then we'd switch to the Predator Blu-ray disc on the HDTV, GTA IV or some other manly pursuit on an HDTV.

But seriously, I think companies can still go a long way to market tech to women. It could prove a lucrative market. In practical - it's doubtful most guys make multi-thousand dollar purchase decisions without the okay of a woman.
allargon posts on October 07, 2008 09:54
I can understand wanting to go to Fry's, Lowes, Home Depot, Harbor Freight, etc. But Best Buy and even today's Radio Shack are pretty much designed for women and couples. Those aren't really guy friendly electronics stores any more.

I know quite a few women that despise the Fry's experience–equipment piled sky high, haphazard displays and unknowlegeable (and don't pretend to be knowlegeable) employees. These women actually don't mind paying (usually 20%) more at Best Buy.
Davemcc posts on October 07, 2008 08:58
My wife loves her electronics. She never turns down a chance to go to an electronics store. The Fireball, Archos, Wii and AEGO-M are all things she wanted for herself. I don't think a prettier store will influence her attraction to electronics one bit.
markw posts on October 07, 2008 07:57
I had some doozeys all ready in response to that juicy subject line, but I decided to be a good boy today.
Post Reply