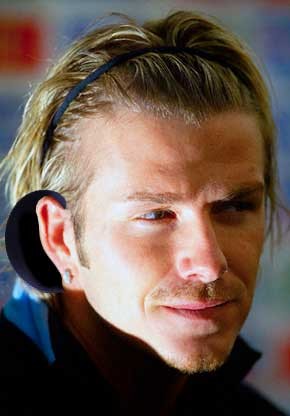 Roskhilde Audio, a high-end Danish company of some notoriety in the audiophile circles has come out with a new invention that is sure to bring about some excitement and controversy amongst naysayers and yeasayers alike. Under development for three years, the new "Audiophile Ears" are presented as the most advanced listening enhancement product ever to hit the audio market since the invention of the transistor.

The Audiophile Ears are made of space-age polymers and each filter is custom crafted with a special molecular bonding process that enhances the audio that is captured as it goes past the ear. While your ears typically capture only 40% of the information flowing past your exterior lobes, the Audiophile Ears grab an estimated 240% more sound, focusing and filtering that information into your ears for enhanced audio and a truly audiophile experience.

Positioned as a "revolutionary new audiophile milestone in listening enjoyment and appreciation", the Audiophile Ears are a device that Roskhilde claims will instantly improve any audio system up to 200% without changing a single parameter.

States Roskhilde Audio President Soren Bernstorff, "Everyone hears differently - and this is what causes a lot of controversy in the audio community. When you break it down, all issues of audio fidelity come down to our ears, not the room or the system itself. If we can improve or correct for the natural problems in the ear, then audio fidelity will rise exponentially."

The new Audiophile Ears are designed to be worn by any listener and slip easily over the head like a solid hair band. The specially-designed audio filters built into the sides of the unit channel corrected sound into your ears in the way that brings the sound back to its pristine fidelity as intended by the artist.

"It's really quite remarkable" quotes Soren, "the Audiophile Ears literally allow anyone to now be an audiophile and have the same rears as the world's greatest composers, musicians and, of course, high-end audio magazine reviewers.

The Audiophile Ears are available now from Roskhilde Audio for just $1999 and come with a 5 year warranty top protect against accidental damage and premature filter failure.

Read the Complete Thread
Exit posts on April 03, 2009 08:20
If anybody can find it and post the album cover from Atomic Rooster – In Hearing of Atomic Rooster, there is an old lady with an awesome hearing device which everyone would probably find amusing. You would probably need a pair. (The band produced some good music for the time, by the way.)
jmilton7043 posts on April 03, 2009 07:42
…the same REARS as the worlds greatest composers….???? Are you trying to make us the butt of your joke?
Davemcc posts on April 02, 2009 21:38
I've got an old set of Mickey Mouse ears from Disney that I could adapt to this purpose. I get all the benefits of not having to hold my hands behind my ears and it still won't cost $2K.
Rolemfat posts on April 02, 2009 17:15
Wake up!

Hey guys,time to wake up.

Jim Robbins, post: 546874
“It's really quite remarkable” quotes Soren, "the Audiophile Ears literally allow anyone to now be an audiophile and have the same rears as the world's greatest composers, musicians and, of course, high-end audio magazine reviewers."

The best part of this article is the typo!

Laughing my Audiophile Rear Off… *LMARO*

True. I think it's going to take more then that to get me some better rears.
Post Reply