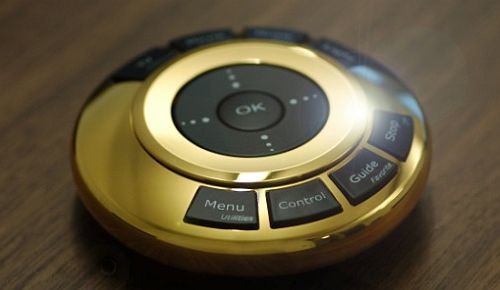 We here at Audioholics are a practical lot.

After having recently lambasted ridiculously overpriced speaker cables whose attributes read like many warnings on the list of Top Ten Signs an Audio Cable Vendor is Selling You Snake Oil and whose manufacturers offer nothing but scientific-sounding marketing drivel to proclaim superior performance, along comes one better:

Once again, we see proof that being well to do has no correlation with intelligence, and Lantic Systems A/S of Denmark is looking to take advantage of this fact with a $55,000 remote control.

At this price, just imagine the cursing when this remote goes missing under the cushions.

Lantic Systems caters to the Yachting crowd, offering electronic luxuries and automation systems to control all those luxuries that any proper yachter expects on their yacht. The jewel centerpiece for this exquisite crown of control: a $55,000, 10 button remote control encased in solid gold, the Gold RC1. That works out to $5,500 per button, and no - there's no LCD touch screen.

With only 10 buttons, the remote itself is near useless, but luckily enough, Lantic sells the whole shebang. If the remote is $55k, the rest of the system must be beyond astronomical.

The Harmony remotes retail for at least $54,500 less, have many more buttons, and some even a touch screen. And I am quite sure Logitech could be coaxed into providing coding to control the yacht for an awful lot less than the difference.

Lantic Systems claims that the first orders for this device have already started rolling in.

So if you possess more money than brain cells, order yours today.

A really rich guy would use 500Euro banknotes

kcarlile, post: 330388
I dunno, I think black plastic buttons on a gold remote are somewhat declasse. Let me know when they put touch sensitive, diamond labeled panels on it. Maybe then I'll be interested.

People with that kind of money dont care about what things cost,all they care about is how soon it can be delievered.
kcarlile posts on November 16, 2007 12:42
I dunno, I think black plastic buttons on a gold remote are somewhat declasse. Let me know when they put touch sensitive, diamond labeled panels on it. Maybe then I'll be interested.
E-A-G-L-E-S posts on November 16, 2007 11:18

That's the nice way to put it
Post Reply