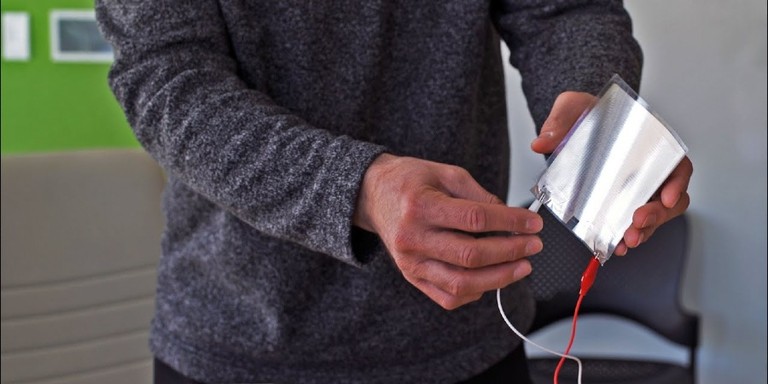 Engineers at the Massachusetts Institute of Technology have designed and built working prototypes of a paper-thin loudspeaker that can turn any surface into a “high-quality, active audio source,” according to a report in MIT News. Unlike other thin-membrane speaker designs that Audioholics readers may be familiar with, such as electrostatic (MartinLogan) and planar magnetic (Magnepan) speakers, this new design out of MIT does not require external stators or magnets — the thin film is itself a self-contained loudspeaker that produces sound with “minimal distortion,” while requiring far less energy than a traditional speaker. The team of researchers working on the project presented a working prototype roughly the size of a human hand, weighing just over 2 grams. The speaker can reportedly be bonded to any type of surface, effectively turning that surface into a speaker. The team pioneered a three-step fabrication technique that is both simple and scalable, theoretically allowing the production of paper-thin loudspeakers large enough to wallpaper a room or line the cabin of a car or other vehicle. The research was funded in part by a grant from the Ford Motor Company, and published in a scholarly journal called IEEE Transactions on Industrial Electronics. The senior author of the paper is Vladimir Bulović, the Fariborz Maseeh Chair in Emerging Technology, leader of the Organic and Nanostructured Electronics Laboratory (ONE Lab), and director of MIT.nano. Bulović wrote the paper with lead author Jinchi Han, a ONE Lab postdoc, and co-senior author Jeffrey Lang, the Vitesse Professor of Electrical Engineering.

A paper-thin loudspeaker plays "We Are the Champions" by Queen

The team has envisioned a wide variety of possible applications for this unique technology. Imagine, for example, if the walls of an airplane were lined with speakers used as part of a large-scale active noise-cancellation apparatus. Microphones would measure ambient noise, and the speakers would play back an out-of-phase signal to cancel it out, just as in noise-cancelling headphones. Active noise cancellation of this type could be used inside cars, military vehicles, factories, and any number of other cacophonous environments. Many cars already employ some type of active noise-cancellation, and it stands to reason that the tech will become even more important as quiet electric cars become the norm. (In an electric car, noise from the road, from wind resistance, and from chassis vibration are all more noticeable. This is precisely why Bose introduced its QuietComfort Road Noise Control system in 2019.) Electric cars also place a higher importance on reducing weight, and a paper-thin noise-cancellation system would likely be considerably lighter than the sound-deadening material used to quiet the cabins of luxury cars today. Aside from noise-cancellation, these slim, bendable speakers could be used for immersive entertainment, such as in a theme park attraction, or interactive museum exhibit. The design team also points out that the thin, light, and energy-efficient design makes this technology a natural fit for future smart devices — an application wherein battery life is paramount. The team says that one square meter (10.76 square feet) of this new loudspeaker surface requires only about 100 milliwatts of power. According to Bulović et al., a typical home speaker would require more than ten times as much power to generate similar SPLs when measured at an equal distance.

It feels remarkable to take what looks like a slender sheet of paper, attach two clips to it, plug it into the headphone port of your computer, and start hearing sounds emanating from it. It can be used anywhere. One just needs a smidgeon of electrical power to run it 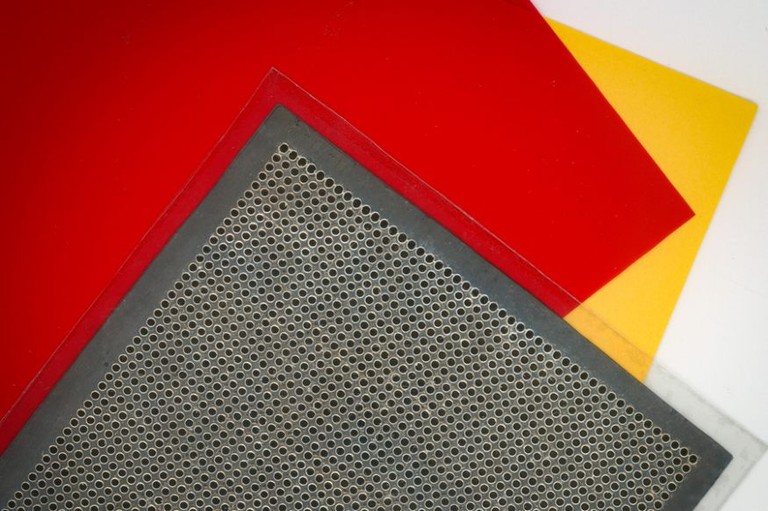 Physics 101: When an electric current is sent through a coil of wire, it induces a magnetic field. As many Audioholics readers will know, a typical dynamic speaker works by sending an electric current (the audio signal) through a voice coil attached to a speaker diaphragm. The resultant magnetic field interacts with the magnetic field of a strategically-located permanent magnet, and the diaphragm vibrates, thereby moving air and creating sound. This new paper-thin speaker is entirely different. It relies on a thin film of a specially-treated piezoelectric material that moves when voltage is applied over it. Compared to ordinary speakers, it seems like an impossibly thin, light, and simple design. But it has some ingenious engineering hidden on its paper-like surface. Consider for a moment one significant way in which it differs from other thin-film loudspeakers. Planar magnetic speakers work in a fairly similar way to the dynamic speakers described above, requiring permanent magnets. Electrostats function differently, but that’s beyond the purview of this article. The important detail is that both of these more familiar technologies require open air on both sides of the diaphragm. A Magnepan or MartinLogan speaker needs about 3 feet of clearance between the speaker and the wall behind it in order to sound its best, but even a tiny planar driver inside the ear-cup of a headphone must be able to bend freely in both the forward and backward directions in order to reproduce an audio signal. If you tried to glue one of these drivers to a solid surface, it would not be able to generate sound at all. To get around this limitation, the team at MIT changed the design of a thin-membrane driver at its most fundamental level. In this new design, the membrane does not vibrate forward and backward as a whole. Instead, the thin underlying layer of material is covered by tiny domes that vibrate individually. These infinitesimal domes are surrounded by spacer layers both above and below the film. These spacer layers allow the domes to vibrate freely, while at the same time insulating them from the mounting surface. The spacer layers also protect the domes from impact and abrasion during installation and regular use, making the speaker durable enough for a variety of applications.

We have the ability to precisely generate mechanical motion of air by activating a physical surface that is scalable. The options of how to use this technology are limitless.

Building this innovative loudspeaker starts with a laser, which is used to cut very small holes into a sheet of polyethylene terephthalate (PET), a common type of lightweight thermoplastic polymer. This perforated PET layer is then laminated with an extremely thin film of a piezoelectric material called polyvinylidene fluoride (PVDF). The piezoelectric PVDF is only 8 microns in thickness (for context, a human hair is approximately 70 microns thick). Next, the team applies a vacuum on top of the bonded sheets, and a heat source beneath them. Together, the vacuum and heat create a pressure differential that is strong enough to cause the super-thin layer of PVDF to bulge. The PVDF protrudes through the laser-cut holes in the PET layer, creating the tiny domes described earlier, each of which is only about 15 microns tall. Finally, a second layer of PET is applied to provide a buffer space between the final mounting surface and the domes.

This is a very simple, straightforward process. It would allow us to produce these loudspeakers in a high-throughput fashion if we integrate it with a roll-to-roll process in the future. That means it could be fabricated in large amounts, like wallpaper to cover walls, cars, or aircraft interiors.

Achieving the desired acoustic performance was not an overnight success, but the simple fabrication process allowed the team to change variables — such as the size of the domes and the thickness of the piezoelectric layer — and test different combinations in order to arrive at the ideal design. In order to change the size of the domes, the team only had to cut larger or smaller holes in the PET layer. The team soon discovered that larger domes moved more air, making more sound, as you might expect. But larger domes also had lower resonance frequencies, leading to higher distortion. A delicate balance was required. In the final product, the domes are about 15 microns in height, and only move about half a micron when they vibrate. Naturally, it takes thousands of these minuscule domes vibrating in concert in order to produce a sound that we can hear, but even the small prototype speaker built by the team was capable of producing up to 86dB (measured at a distance of 30 centimeters). And of course, a scaled-up design with a larger surface area could play louder. But there are also other possible applications for this technology that go beyond the playback of a typical audio signal.

Because the loudspeaker has such a high resonance frequency — owing to the fact that only the tiny domes vibrate, rather than the entire membrane — it can reportedly be used for ultrasound applications, such as ultrasound imaging, which uses very high frequency sound waves to produce images. The higher the frequency, the higher the resolution in the final image. The team also suggests that future versions of the device could use ultrasound “echolocation” to track where a person is standing in a room, and then beam sound directly toward that person, even as he/she/they move around the room. Ever considered using a loudspeaker to stir chemicals? Me neither. But the MIT team says that this speaker could be immersed in a liquid, and that the vibrating domes could be used to agitate chemicals more efficiently than conventional chemical processing techniques. Finally, the team proposes that the device could be used to create patterns of light for future display technologies, simply by covering the vibrating domes with a reflective surface.

It’s impossible to know when or if this fascinating technology might eventually find its way into the types of audio and video entertainment devices that we use on a daily basis, but its creators have already laid out such a broad range of possible applications that it’s not difficult to imagine a future in which these paper-thin loudspeakers play some kind of potentially significant role. Ioannis (John) Kymissis, Professor of Electrical Engineering and Chair of the Department of Electrical Engineering at Columbia University, was not involved in this research, but had this to say about the project: “I think this is a very creative approach to making this class of ultra-thin speakers. The strategy of doming the film stack using photolithographically patterned templates is quite unique and likely to lead to a range of new applications in speakers and microphones.” What do you think about this technological development? Share your thoughts in the related forum thread below.

The MIT patent seems to do something similar without the transducers.
BoredSysAdmin posts on June 09, 2022 13:49
the original paper: https://ieeexplore.ieee.org/document/9714188
Unfortunately, this one is behind a paywall, and sci-hub doesn't have a copy.
If someone is ultra curious they could email one of the authors and as for a copy. They are usually happy to oblige.
felipe posts on June 09, 2022 12:47
Woow this new tech sounds promising (no pun intended)
lovinthehd posts on June 08, 2022 20:34
I've heard of this tech before, but more in theory, so nice to see some application, but will be very room/building/contruction method specific…..depending how tunable the response from the membrane might be ?
Post Reply