Loudspeaker Cabinet Bracing: A Detailed Look on Do's and Dont's 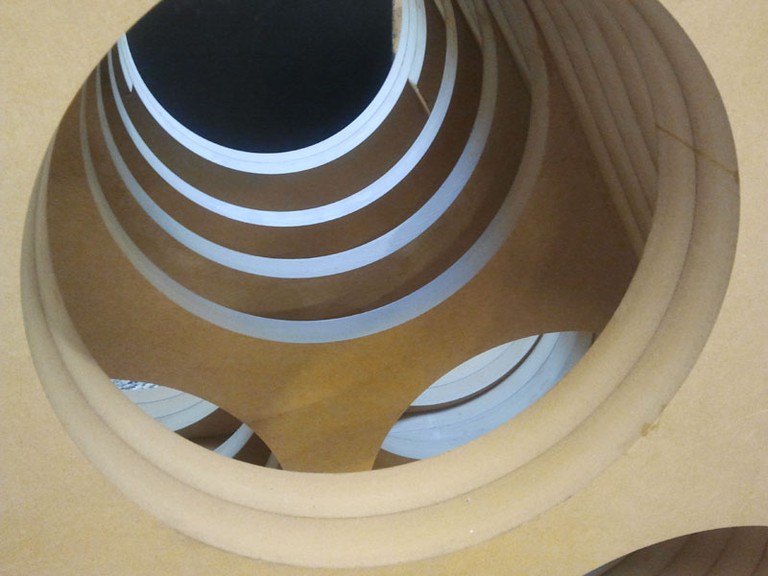 A recent Audioholics article titled “Identifying Legitimately High Fidelity Loudspeakers: the Myths & Facts about Cabinets” posited that one measure of quality is in a well-braced cabinet.  Poorly or improperly braced loudspeaker cabinets vibrate unduly, coloring the overall acoustic output and lowering fidelity.  In this article, we will explore the reasons that a stiff cabinet is a desirable feature of a well-designed loudspeaker based on established engineering mechanics.  We will also discuss how improper understanding of this subject matter and a limited amount of measurement of a test mockup could falsely lead one to believe that using fewer braces, thereby lowering the panel resonance of a cabinet, is desirable.  As you will see in this analysis, the stiffer the cabinet, the lower the resonances become which will greatly reduce unwanted colorations of sound.

Improper understanding of this subject matter and an inadequate test fixture can mislead one to believe that using less bracing and lowering the panel resonance is beneficial. This is simply NOT true as the mechanics proves.

The approach taken here will be to look at the behavior of an individual panel of a loudspeaker cabinet.  In the course of the analysis, certain idealizations and assumptions will be made to keep the analysis as simple as possible.  Adding in the other panels, bracing, and holes for the drivers with additional mass present in the complete cabinet would introduce further complexity along with partial lateral and rotational restraint at the panel edges and brace ends along with the interaction that would develop with those other components.  The exact numbers we get will not precisely describe any particular loudspeaker, but it will display behavioral trends that will occur in the complete system.  The intent is to keep the focus on these trends without obscuring them by the additional complexity that would be introduced when accounting for the full system.

A purely analytical approach is decidedly different from what is done in the audio industry where prototyping and mockups are a common approach to design.  Structural Engineering practice relies heavily on analytical tools to determine the behavior of structures for design.  Buildings and other large structures are unlike mass produced products in that each is often unique, so it is not practical or feasible to create prototypes of every structure.  Instead, analytical and design techniques are frequently developed and validated in laboratory testing of scaled physical models.  The results of this work are then used by industry standards committees for codification to use in design practice.

Defining the Relation of Sound, Mechanical Vibration, and Cabinet Design

First, we will lay a little groundwork for our discussion.  Let us start with a simple premise: sound is mechanical vibration, and the majority of readers here are well aware of this fact.  Sound reproduction is an attempt to store those vibrations in some fixed medium for later playback that will mimic, as closely as possible, the original waveform of the sound, with the term fidelity used to describe how well that process is achieved.  There are many factors that can reduce fidelity in sound reproduction, but few are as susceptible to problems as the final step, where the stored waveform is converted back into mechanical vibrations by a device called a transducer, commonly known as a loudspeaker

Idealized design of a loudspeaker system defines specific components, the drivers, which are intended to vibrate and radiate the reconstituted sound.  All the other components in the system, including the cabinets that provide physical support to the drivers should be completely inert and not undergo any mechanical vibration at all.  Such an idealization implicitly requires that these other components be infinitely stiff to prevent extraneous vibration.  In the real world, this is not possible, so the task to properly engineer a loudspeaker system becomes an attempt to minimize any extraneous vibration and make it inaudible to the listener.  To accomplish this, the cabinet has to be made stiff enough to drive the natural frequencies of vibration out of the audible range, or at least out of the range where the cabinet vibration will unfavorably interact with the drivers.

The cabinet is almost invariably the largest component of a loudspeaker system, which makes the design crucial for two reasons.  First, the significant surface area of the cabinet can contribute larger amplitude displacements, making it more difficult to control the audibility.  Second, stiffness and the natural frequencies of vibration are functions of the physical dimensions of an object, so that relatively large size works against efforts to keep vibrations out of audible ranges.

Now that we have defined the need for stiffness in a loudspeaker cabinet, we must go about determining how to achieve this in a practical loudspeaker design.

In this discussion, we will investigate some of the mechanical parameters that are involved in minimizing unwanted acoustic vibrations.  From this, we will develop an analysis that will demonstrate the trends in the relationship between the magnitude of cabinet vibration and sound pressure.

First, we will describe some of the mechanical theory behind what is going on in closed form mathematical solutions.  Then, because the closed form solutions are for idealized behavior that is used to simplify the mathematics, we will perform a finite element analysis using SAP2000, an analysis software package by Computers and Structures, Inc., to get a more complete look at the behavior of a speaker panel with different configurations of braces.

Twexcom, post: 926039
I think one vertical brace would resonate as well, because it is still wood, it would just be like another wall.

Run the vertical brace from the right side of the cabinet to the left side.

Rickster71, post: 854260
I wonder what the reasoning is (or difference) behind so many horizontal braces, instead of one full length vertical brace?

I think one vertical brace would resonate as well, because it is still wood, it would just be like another wall.

They've been around for less then 2 years (I've been working with them for about a year now). They're a small shop that specializes in hand-made and custom speakers. Everything they do is geared towards sonic purity, structure integrity and exquisite finishes. EbenLee's website is here.

Selb4itkicksit, post: 880900
Okay, I'm checking out a new brand that looks interesting. I need some small speakers for a den and the ones I'm looking at are made out of Baltic birch ply also using the layer cabinet contruction that was mentioned earlier in this thread.

Whats the advantage of baltic birch ply and a stacked cabinet? Is it worth the extra costs?