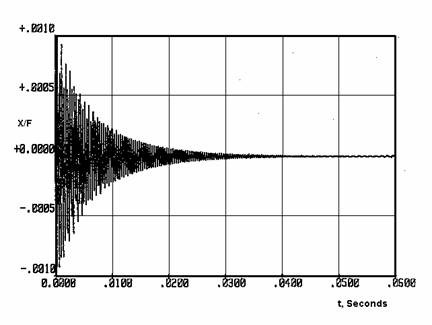 When I design a loudspeaker system for home or studio use, with the goal of maximizing sonic accuracy, there are a handful of key areas I focus on when it comes time to judge how successful the design is.

Among the top three subjective criteria that I use in judging success in reaching the goal of sonic accuracy are soundstaging and transparency. Focusing on the latter, one of the things that I as the designer can do to maximize transparency is to lower the noise floor of the system - and do so as much as it is possible, given a particular design and budget constraints.

The test subject I'll be modeling is a system comprising a totally enclosed box. Its a mid-bass system, operating with a band pass response. The low pass -3dB point established by a crossover network at 430 Hz, with the particular driver/cabinet alignment chosen providing for a high pass -3dB point at 40 Hz.

The cabinet's panels will, virtually, be built of a polymer composite. I chose the composite, not only for its well-understood mechanical properties but also because of its strength, excellent dimensional stability and superior vibration damping properties. 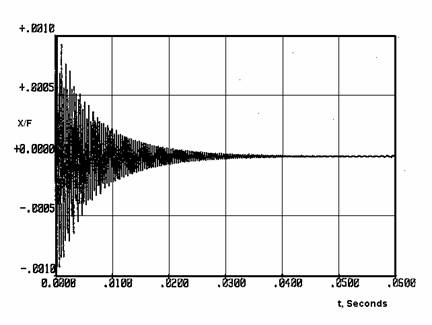 Indeed, the material I used for this model has the ability to dampen vibration 4 times faster than granite! Knuckle-rap a cabinet made of this composite and it feels - and sounds - as if you're knocking on a block of solid rock.

Panel acoustic output results from both varying internal surface pressure arising as a result of the action of the driver's diaphragm as well as mechanical vibration reaction induced by the motion of the driver's frame, as well as other panels. (The latter case is easy to envision when one considers the high degree of impedance matching that will exist between panels made of the same material unless measures are taken to provide for an impedance mismatch between the panels; doing so will reflect vibrational energy back to the source panel).

In either case, minimization of panel vibration can be accomplished by a variety of means including isolation, absorption, a combination of both or other such engineered solutions. In this first part of a 2-article series, I'll focus directly on the panels themselves and what can be done to minimize this sort of secondary acoustic radiation.

With these general design points in mind, let's commence the analysis.

Any panel, whether simply supported or clamped at any (or every) edge, will exhibit a clearly defined, vibrational mode series known as eigenvalue, which are theoretically infinite in number and, in general, are not harmonically related. To demonstrate this vibrational series, I ran a FEA (Finite Element Analysis) simulation, modeling a rectangular panel, clamped at all 4 edges, with the following physical dimensions:

The mechanical properties of the material, an isotropic polymer composite, are:

In general, when working up a simulation series I tend to model only the first 30 or so modes as the resonance frequencies which occur above that range, as already mentioned, generally contribute little to the systems total acoustic output. Phase-cancellation, owing to different segments of the panel moving in opposite directions and diminishing panel volume-velocity all add up to a lowered panel contribution to total system acoustic output,

when the panel is operating in the upper reaches of the mode series.

Here are the results, in graphical form, illustrating the magnitude of peak panel displacement at various mode numbers. The panel displacement, as modeled for each simulation series, is exaggerated in appearance for the sake of visual clarity.

Its clear from this model that rectangular panels do exhibit resonance modes, each with a distinct pattern of panel deformation. Indeed, note that different sections of the panel can, at the same moment in time, be moving in opposite directions.

In general, the higher modes will get different areas of the panel moving in opposite directions, effectively diminishing the net acoustic radiation of the panel owing to the diminished net panel area capable of producing the acoustic radiation in the first place. In other words, phase cancellation, arising from different panel areas moving in opposite directions, limits the net amount of total acoustic radiation emitted. Adding to this the fact that higher order modes are easier to damp and we see these self-same modes are generally not in a position to affect system response to the degree the lower order modes are capable of.

For mid-bass cabinets such as the one I'm using here for simulation purposes, I try to shift - as best practices dictates - as much of the resonance series above the system's low pass cut-off point, with the net result, of course, being a quieter cabinet and lower system mechanical noise floor. Let's run some FEA simulations to look at the effects of panel cross-bracing.

I re-ran the above simulation, this time modeling a series of bracing techniques. For the first simulation, I braced the panel vertically (across the mid-section of the panel. parallel to the front-edge Y-axis, with the following results:

Bracing the panel vertically produced a series of modes clustered around 96 Hz. This upward-shift of the fundamental resonance is a step in the right direction, but not nearly high enough for our purposes.

I then modeled the panel braced horizontally, with the brace located at .5y, parallel to the x-axis and running the full length of the panel.

The following results were produced:

In this simulation, the upward shift of the natural panel resonance frequencies is quite apparent, producing superior results to that of the vertically-positioned brace. For a cabinet to be used for the reproduction of the mid-bass portion of the total system response, this is again a step in the right direction, but still not high enough for our purposes.

In actual practice I use multiple horizontal braces for a mid-bass system of this size. Modeling two braces located approximately one third and two thirds up the y-axis (front) edge of the panel and running to the back edge of the panel produces the following results:

The frequency at which the fundamental natural panel resonance occurs is certainly closer to 430 Hz but I'd like to see the mode series pushed higher. Modeling 3 braces, placed at .25y, .5y, and .75y and running the full length of the panel from front to back produces the following results:

The first mode of vibration is now above the low-pass cut off frequency, but only by about a half octave. I could add another brace, which would certainly push the mode series higher. Since we already know, by virtue of the preceding simulations, that bracing works well, I chose at this point in the series to instead to re-run the simulation, keeping the 3 braces in place, but now doubling the thickness of the panel to 38mm (1.5"). Doing so produced a 1st mode resonance frequency of 701 Hz.

Here we see the fundamental mode frequency increase a bit to 720 Hz. There are, of course, practical limits to how much bracing one can employ or how thick panel walls can be made in a design. There's also a diminishing returns effect in place that constrains a designer as to how far one can reasonably expect to go with increasing the amount and type of bracing or how thick the panel walls can be made.

Thus far we have seen that in using the appropriate panel material, with high enough damping, properly braced and of the correct thickness a designer can effectively shift the mode series sufficiently high and/or otherwise minimize the affect panel resonances can have on final system output and do so to the point they no longer pose response problems for the system. Sometimes, though, shifting panel resonances upward can be counter-productive. For example, if doing so shifts them in to a portion of the response spectrum where they will have a deleterious effect on the system's output, doing more harm than good, then shifting them downward, or staggering the response aberrations would be called for. 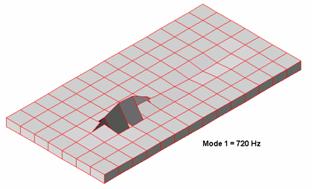