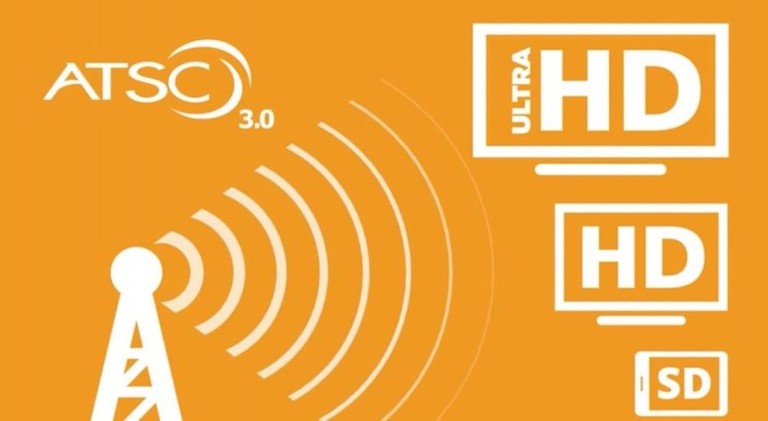 ATSC 3.0 or “Next-Gen TV” is the next step in the evolution of digital broadcast television, and it’s coming to more than 40 US television markets in 2020. In a cord-cutting world, it’s great to see the oldest cord of all giving us reasons to spare the scissors. Regions served by the roll-out will have access to interactive digital television, broadcast in a new standard that’s capable of 4K/HDR or full UltraHD and multi-channel audio. It’s a serious upgrade from ATSC 1.0, the standard that gave us over-air HDTV. Unfortunately Next Gen TV is not backward compatible, so all that relatively new ATSC 1.0 transmitter and receiver hardware will require an upgrade. But in exchange for the inconvenience of no backward compatibility, ATSC 3.0 will give us a better signal with more efficient, less fragile modulation that should provide better reception than the current standard. Next Gen TV also contains updated codecs with H.265, or HVEC (for up to 2160P/4K resolution at 120 frames per-second and “wide color gamut”) for video, as well as Dolby AC-4 and MPEG-H 3D for audio. And of course, two-way communication on an IP-backbone, making it a kind-of Internet-lite

The Advanced Television Systems Committee (ATSC) has a bold vision for its new digital broadcast standard, that maximizes the use of its Internet Protocol backbone. Unlike the very-high frequency of wireless 5G, it’s carried over a more robust 6MHz over-the-air (OTA) frequency that can better-penetrate obstacles in cities to cast a wider net over populated areas. from a single transmitter. It’s also designed specifically for high-capacity, one-to-many digital transmissions that the ATSC hopes will be employed to ease the load on conventional Internet services.

This grand vision for ATSC 3.0 would be to use its new architecture to pick up the slack for certain Over-the-Top (OTT) services and applications in some interesting ways. For instance, it could thoeretically lease the digital air-waves to companies like Apple, Google or Microsoft for certain cross-continental transmissions like software and operating system updates. In theory, ATSC 3.0 could be a cost-saving alternative to quickly distribute redundant transmissions that could choke the “last mile” of today's Internet service. We'll know the standard has really taken off when it makes the leap from TVs to mobile devices. Devices packed with ATSC 3.0 communication chips could do way more than just bring back the Sony Watchman. But it remains to be seen how wireless carriers will feel about another standard cutting into user’s data plans. If things go the ATSC's way in coming years, it’s not too far-fetched to imagine using an iPhone on an AT&T wireless plan to choose or even roam between wireless-data or ATSC 3.0 to watch HBOMax.

It seems like only yesterday that we converted our over-air TVs to receive ATSC 1.0. The current digital broadcast standard was introduced in 1996 but deployment was only finalized in the US by 2009. The switch coincided with wide consumer adoption of HDTV, so most of us weren’t troubled by the requirement for a new digital TV tuners because chances are, your new HDTV already had one. But, since ATSC 1.0 caps out at 1080P, today’s over-air broadcasts won’t exactly bring out the best in your UltraHD TV, until they're upgraded to ATSC 3.0. There’s no rush to upgrade your receivers however, provided your local broadcast TV stations actually make this optional upgrade, because the FCC requires broadcasters to keep running ATSC 1.0 for at least five years after introducing ATSC 3.0. In fact, the FCC has no plans to ever make the switch mandatory, nor is there a congress-approved subsidy for Next Gen TV receivers as there was for the switch to ATSC 1.0. So, for better or worse, the push to this much-improved new standard, is really more of a nudge.

A variety of Next Gen TV tuners started to become more widely available last year and can be found in small, inexpensive pen-sized dongles or set-top-boxes that integrate other features. Some new UHD TVs are already being sold with ATSC 3.0 tuners built-in. Korean brands, Samsung and LG have been early adopters, probably because South Korea is way ahead of the digital broadcast game, its television networks began broadcasting ATSC 3.0 back in 2017.

Because the new digital broadcast standard will feature all-new interactive features operating off the Internet, we’ll see a new breed of consumer products for the home. Gateway receivers will transmit your local ATSC 3.0 broadcast through your household wi-fi, bringing it into the deep recesses of your home that might normally have reception difficulty. And of course... with new tech-standards, come new tech-snake oil, and ATSC 3.0 is no exception. Expect to see antennas being advertised as ATSC 3, 4K or Next-Gen TV antennas, specially optimized with fairy dust to receive the new signals. Marketing material on antennas have been doing this since the advent of color TV. But if you’ve already got an antenna that works, you can save your money. There is no such thing as a color, HD, ATSC 3 or a 4K antenna. An antenna is designed to pick up over-air signals in the VHF and UHF band, and this hasn’t changed since the start of the NTSC-era back in the 1950s, and wont change for ATSC 3.0.

ATSC 3.0 Deployment Near You

Broadcasters in the largest TV markets in the United States will begin rolling out ATSC 3.0 this year. Both public and commercial broadcasters are among the early adopters of the new standard and include familiar media companies like Fox, NBCUniversal, Univision and America’s Public Television Stations (APTS). Trials have already been underway in Phoenix AZ, Dallas TX, East Lansing MI, Raleigh NC and Santa Barbara CA.

Your Local Mileage May Vary

Although the new standard supports UHD, HDR and will make possible many of the futuristic, Inernet-TV features we’ve been dreaming about, it will take some time before ATSC 3.0 reaches its potential. So, even in Next Gen TV broadcast areas, exact features are up to the discretion of the broadcaster. So, don’t expect every broadcast to provide pristine UHD just yet, broadcasters will still be constrained by a lack of available UHD content for some time. But that's no reason for early-adopters to sit on the fence, consumer demand for ATSC 3.0 will do its part to push the standard into wider adoption by broadcasters. Wide-adoption of sensible new technologies is never a certainty.

According to the TVTechnology broadcasting trade website, the 40 markets that will begin ATSC 3.0 availability in 2020 includes the following:

TVTechnology also says that these markets are expected to follow close behind, sorted by population:

It seems ATSC 3.0 is an important step in broadcast TV that, despite some rather realistic fears that it will be used to push "premium" channels over-air, the FCC guarantees that broadcasters must maintain a certain amount of basic, free television programming. Although, the new standard will almost certainly use its interactive capability for logins, subscriptions and other ways to bring you “premium” content for a fee over-air. Broadcast TV will look a lot like the Internet with gated content and targeted advertising capabilities. But it's those features that makes ATSC 3.0 a financially sound, long-term benefit to broadcasters. Unfortunately, it remains to be seen exactly how widely adopted or how mobile the new standard will become. Smaller, local broadcasters will have the most difficulty getting on-board due to its significant upgrade costs. These are exactly the kinds of businesses that have fallen on difficult times of late, as the value of conventional TV advertising is slowly shrivelling away with viewership. But the benefits for bringing network television advertising into the targeted 21st century, along with instant-ecomm potential at the push of the TV remote, there’s definitely long-term gold in them thar' OTA broadcasts.