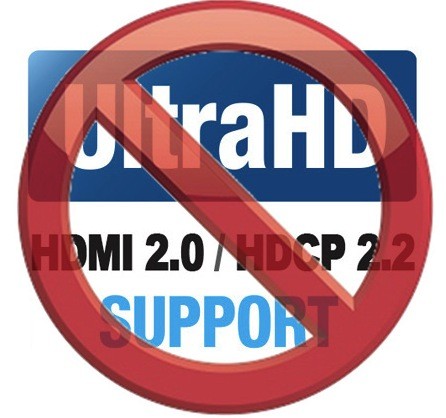 There has been a lot of talk lately about the new HDMI specification and how it relates to recent product announcements. As seems to be par for the course with HDMI, confusion abounds mostly because of partial implementations and staggeringly low amounts of information available. We're here to demystify the new HDMI spec and help all of our readers understand just what they are getting when they purchase a new device touting HDMI 2.0 or HDCP 2.2.

The last version of HDMI was 1.4. This allowed data transfers of up to 10.2Gbps. Version 1.4 also added 3D support, Audio Return Channel, and a few other features over previous versions. The largest change in HDMI Version 2.0 is the increase in the amount of data that can be sent. Version 2.0 can transfer up to 18Gbps. While HDMI 1.4 allowed up to 4k resolutions (Ultra HD or 4k), it was limited to 24 frames per second. The increased bandwidth of Version 2.0 allows full 4k at 50 or 60 frames per second.

While 24 frames per second is fine for watching films, video games often require higher frame rates. On top of that, the additional bandwidth allows for other advancements like:

Version 1.4 had an 8-bit color maximum. The increased bit-depth allows for more colors to be displayed. While 8-bit allowed for 16.7 million colors, 12-bit allows for closer to 70 billion. Better color is obviously a good thing.

HDMI 2.0 allows for two video streams to be sent to the same screen (1080p) along with audio. While this sounds like a terrible idea, it works well when coupled with 3D glasses. One person would see one image while the other would see a second. For gaming, this allows two people to use the same screen without having to split the screen. Those that like racing or sport games will immediately recognize the advantage of keeping you screen private from the person you are playing against.

Up to 32 Channels of Audio

HDMI 1.4 maxed out at 8 channels of audio without the use of lossy compression. With Dolby Atmos and other multichannel solutions on the way from Auro and DTS, having more audio channels will become very important. HDMI 2.0 can support up to 32 channels of audio. The quality of the audio stream has also increased up to a maximum of 1536 kHz (48 kHz sampling rate per channel for the full 32 channels). This easily supports high-def audio in more modest multichannel system.

HDMI 2.0 promises a revamping of the HDMI CEC. CEC promised to control all our devices with one remote through the HDMI connection. Our experience with HDMI CEC has been spotty at best and everything we've read from others agrees. A CEC retooling could make this feature actually useful. Hopefully.

Most importantly, HDMI 2.0 makes all these changes without requiring users to buy new cables. Unfortunately, currently HDMI 1.4 ports can't be firmware upgraded to HDMI 2.0. That means if you have a device with 1.4, you'll be limited by it until you upgrade everything in your signal chain. This becomes important as we explore what HDCP 2.2 brings to the table.

If you do want 4k content, every device in your video chain must have HDCP 2.2.

HDCP stands for High-bandwidth Digital Content Protection. HDCP requires that each HDMI connection establish a unique link between the two devices, often called a handshake. This "handshake" trades encrypted codes between the devices so that you can't plug your Blu-ray player into a recorder and rip a copy. Many of the problems that we hear people having with their HDMI devices comes from this handshake failing.

HDCP 2.2 is all about protecting 4k content. That means if you want to stick with 1080p for the time being, you don't have to worry about HDCP 2.2. If you do want 4k content, every device in your video chain must have HDCP 2.2. This will be true in the future where content will be HDCP 2.2 encrypted. Non-2.2 encrypted content will not apply.

The problem we've seen is that people are assuming that anything with HDMI 2.0 will have HDCP 2.2. So far, that has not been the case. Our research has shown that there are no devices currently offered that have both a full HDMI 2.0 implementation and HDCP 2.2.

Right now, if you've bought (or are thinking of buying) a new receiver from the likes of Denon, Marantz, and Yamaha, you may see HDMI 2.0 on the specification sheet. This is a full 18Gbps HDMI 2.0 port meaning you can realize all the additional benefits of HDMI 2.0. But they don't have HDCP 2.2 so future content may or may not be limited.

On the flip side, new Onkyo receivers are listed with HDCP 2.2. What they aren't telling you is that the HDMI 2.0 implementation is limited to 10.2Gbps (just like HDMI 1.4). While this allows the Onkyo receiver to pass the HDCP 2.2 handshake, it will limit how much data can be passed, negating many of the benefits of HDMI 2.0.

If the device does NOT show HDCP 2.2 compatibility, when native 4k content arrives, your device will not accept it.

If you are shopping for a 4k display, you'll want to look for HDCP 2.2 compatibility as well as resolution and bit depth. Match the display's capabilities with the HDMI 2.0 maximums, and you should be good to go. If the display does NOT show HDCP 2.2 compatibility, when native 4k content arrives, your display will not accept it. On receivers, you'll want to check how many of their inputs/outputs are HDMI 2.0 and HDCP 2.2 enabled. Right now, manufacturers are limiting the maximum number to decrease costs. With limited bandwidth on some HDMI 2.0 terminals and lack of HDCP 2.2 on others, you may have to send video directly from your Blu-ray player to your display (bypassing your receiver) if you buy one of the first generation HDMI 2.0 receivers.

HDCP 2.2 must be on a HDMI 2.0 terminal but not all HDMI connections support the full HDMI 2.0 spec. It is a confusing time as HDMI 2.0 is only now hitting the market. In a year or two, HDMI 2.0 and HDCP 2.2 will be ubiquitous. For now, consumers need to purchase with care lest they end up with a device that will become obsolete when native 4k content arrives.  If you truly care about native 4k, then make sure ALL of your equipment that you plan on transmitting it through has the hardware support.  If the new HDTV or AV Receiver you are contemplating  buying now doesn't support HDCP 2.2, you may want to hold off for the next product cycle which is usually 8-10 months for AV receivers and HDTVs.

Read the Complete Thread
Cos posts on April 05, 2015 19:36
There is part of the confusion, it may have HDMI 2.0 which is entirely possible. The problem is that it may not have HDCP 2.2, which means copy protected material, like 4k Blu Rays, when they come out, will not be supported by the Onkyo or will be at a reduced bandwidth and not capable of doing 4:4:4 color. The 636 is HDCP compatible, but I have no idea the impact of 10.2Gb/s vs 18.2 will have on performance.

The only units I know that will be upgraded to full bandwidth HDCP 2.2 will be the Marantz 8802, though I have heard rumor that the 7702 might also be a candidate.
Soulfulpsy posts on April 05, 2015 15:37
I just happened on to this article right after leaving a website that assumred me that the Onkyo TX NR636 HAD true HDMI 2. At Amazon, the listing's description only says that its HDMI supports 4K video at 60 fps; it never says HDMI 2. At the time, I assumed that this meant it was HDMI 2 since that is the standard outcome of the higher rate of data transfer. However, after ordering and then reading this article, I am left with much doubt. I've written the company that is selling the AV through Amazon to see what it says; and also the website (Wirecutter) that made the asrruance of HDMI 2 to see what they say. I did not see any easy way to query Onkyo at their web site.

My questions to you, if you can reply, is to ask, #1, could there have been a change, some sort of upgrade that means that Oknyo now is offering full, true, complete HDMI? #2, even if yes, how could it be possible that they could use the term HDMI 2 but not have it at full capacity. Wouldn't that disqualify them from using the standard which becomes a guarantee that they are telling the truth.
BoredSysAdmin posts on October 09, 2014 21:16
Again, this should not be the headache for most TV owners. 4K's resolution PRACTICAL use in the projectors, not TVs.
Time and time again - early adopters suffer. Same was for early HD movies or Betamax or 8-Track tapes.

As for myself, I plan to sit on the fence with my ancient Onkyo 805 and you'll have to pry it out of my hands (or it goes kaput) before I replace it. With HDMI switcher, HD audio codec support and Audyssey multeq XT - these are bare minimum features required on any modern receiver. The last one is finally showed up on the budget denon model this year.
Not to mention my AVR's amps > most of newer AVR amps I could probably even continue to use it as multi-channel amp if I ever wanted to.

I waited 5 years to upgrade to the Marantz 8801 and less than 8 months later it is almost obsolete! With new Hdmi configurations and new sound codecs it seems like the companies such as Denon, Marantz, Pioneer, and others could have planned firmware upgrades for future changes at a reasonable fee. What they have done is required us to purchase new units if we want these changes. Is this anyway to treat loyal customers that spend their hard earned money on what they think is a quality, fairly future proof unit that they can enjoy for a couple years before it is a legacy item.
I will enjoy my 8801 and will wait to see how thing shake out.
DABTPA posts on October 08, 2014 13:43
Slow Down Electronics Industry

I may be getting old and crotchety as I just turned 60, but having audio as the second love of my entire life, my opinion is that the manufacturers race to bring out new technology before the old has set in. I still have 5.1,
love it and do not see the need to divide the musical spectrum into umteen zillion channels. I have seen 4k and it is fantastic, but it seems so sharp as to be almost surrealistic. At bear minimum, these companies need to develop technology that is backward compatible. I am not going to be changing gear/cables every 2 years. Did I read somewhere that there are still 32% of American homes that don't have flat screen T.V.s?
Post Reply