5 Reasons Dolby Atmos May Be DOA 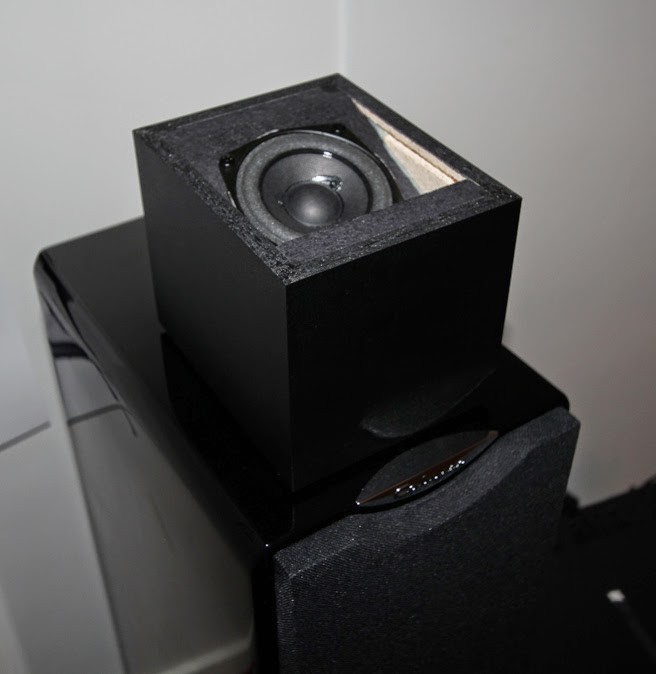 Admit it, you've always wanted a speaker that looked like someone hot glued another speaker on top of it.

This article is an opinion piece.  The opinions shared by the author of this article don't necessarily conform to the site operatives.

Everyone in the AV and home theater world is buzzing about Dolby Atmos. This object-based processing for sound allows sound engineers to move sound around the room three dimensionally rather than just pans. From the content creator side, there is no doubt that Atmos is a useful tool.

For the home user, however, it is clearly stillborn. Just another in a long line of features that is used to pump up sales. Many industries use upgrades and new features to boost sales. For receiver manufactures, adding new features is key to keeping consumer dollars flowing in their direction. Each new receiver line launch is accompanied by announcements of the new, hot feature that you "must" have. Atmos is that feature for the foreseeable future. But most of you won't use it and don't need it. Here are five reasons why.

New Atmos-equipped receivers are only now being announced. Most of them are ranging around the $2k mark. That's a pretty good chunk of change for most buyers. But, you'll also need new speakers. Many of them are either Home Theater in a Box (HTiB) offerings (like the ones from Pioneer and Onkyo) or are fairly pricy add-ons for your existing speakers (see Def Tech). If really want to do Atmos right, you'll install four in-ceiling speakers. But of course you won't. No one is doing that.

If you really wanted a decent Atmos setup, you'd have to upgrade your receiver, install at least two in-ceiling speakers, and probably be out at least $3k. That's a lot to shell out just to get some extra height information especially if you just recently purchased a killer AV receiver or AV Processor that can't be returned or upgraded. Can you envision Joe Consumer doing that? We can't either.

4) The speakers are stupid

What has some people excited are the Atmos-specific speakers. These are speakers with top mounted drivers that are angled to bounce the sound off the ceiling. Of course, these will have inconsistent results depending on the shape of your ceiling. Vaulted ceilings, taller than average rooms, ceiling fans, and more will work directly against this reflected sound.

And we all know how well full range drivers work. Obviously, these will sound excellent.

Oh, did you have your room acoustically treated by a professional? Well, you probably have either absorption or diffusion on your ceiling. Is your wife still mad about the size of your subwoofer? Take a picture of her face when you tell her you want to install four more speakers in the ceiling. Send it to us. We'll be happy to post it on our Facebook wall. Most importantly, you need to look at the diagrams of the Atmos speakers (see above). Is that where you have your rear speakers placed? Most of us have them higher and on the side walls. Dolby is glossing over the fact that we already have our rear speakers fairly high up on the wall and instead assuming that they are at ear level. So, unless you are one of the rare few with rear speakers placed on stands at ear level, you won't be able to use the rear Atmos speakers at all. At least until they come out with something that is meant to be wall mounted.  See our Steerable Atmos Speaker Proposal.

3) You didn't buy height/width speakers but you'll hang them on your ceiling? I have to admit that Onkyo placing Atmos in HTiB systems is a stroke of brilliance. This will get Atmos into a ton of homes and will surely increase the sales of these systems simply because they'll be the only ones with the Atmos logo. Good for Onkyo, good for Dolby, good for the consumer.

Except, the people that buy HTiB systems historically don't know what they are doing. How many times have you been to a person's home and nearly cried at the state of their speakers. I've seen speakers all up at the front. I've seen the front left and right speakers placed on one side of the TV with the surrounds on the other. I've seen speakers in cabinets behind closed, solid wood doors. I've seen such speaker placements that only non-Euclidian geometry could possibly explain. And these are the people that are going to placing Atmos speakers so that they properly bounce the sound off the ceiling? Yeah, that'll work.  In an industry where consumers are clamoring for less speakers, let's add more, hence the Dolby Atmos Paradox.

There is no denying that 4k is a resolution upgrade from 1080p. It's simple math. And yet I've never seen anyone stop and look at a 4k display in a store longer than to notice that the price is exponentially higher than the other HDTV sets. I've walked past enough 4k sets directly next to 1080p displays and can say that I can't see the difference in the store. 4k isn't selling TVs right now. We may all end up with one in the future as, like 720p, eventually there won't be anything else to buy, but there are very few people that are buying new displays purely because they want 4k. Of course, where most people sit they might as well have SD.

In the same vein, 3D is a feature that adds something to your TV viewing experience. For some, it adds nausea and headaches, but others do enjoy it. At least a few times. But we've already seen display manufacturers abandoning 3D (see Visio's latest line). While manufacturers tried to convince us that 3D was the next, greatest thing, people just weren't buying it. Literally.

What does Dolby Atmos bring to the table? By most accounts, a bit more spaciousness to the sound and the occasionally, "Hey, that plane sounded like it flew directly over me!" Does that sound worth spending a couple of grand and putting speakers on your ceiling? We doubt many would think so.

The fact is that our ears are not properly placed to locate higher sounds very well. Being on the same plane but on opposite sides of our head allows us to locate sounds near the ground (or at ear height) very well. That’s why pans are so effective. But as soon as the sounds start coming from overhead, we lose much of that ability. So, in essence, Atmos isn't the problem. The problem is our ears. Maybe Dolby should release a new Atmos-enable head.

What do you think?    Also check out an alternative viewpoint by Steve Munz on 5 Reasons Dolby Atmos WILL Succed.  Share your views on Dolby Atmos in our forum and let us know if you'll be buying into it.

What I still don't like is that I don't seem to have control of when the reciever will use all 11 main channels and cut out zone 2. I would like to tell the receiver to do a real 5.1 and leave zone 2 on.

If there is an actual Atmos signal I'm fine with the recceiver cutting out zone 2.

Not going to be much help there. I don't use multiple zone capability on any of my receivers.
dzzmiller posts on January 23, 2020 11:33

Thanks. I found that I had the sub set to LFE only. So the sub is on now in stereo mode.

What I still don't like is that I don't seem to have control of when the reciever will use all 11 main channels and cut out zone 2. I would like to tell the receiver to do a real 5.1 and leave zone 2 on.

If there is an actual Atmos signal I'm fine with the recceiver cutting out zone 2.
panteragstk posts on January 23, 2020 11:07

I suspect I would have had about equal enjoyment going to 5.1.2. But I'm too lazy to experiment.

I've used Denon/Marantz for two decades. I don't know why the crappy interface and documentation still surprises me. Why zone 2 plays in some modes but not others is a mystery. Why the sub doesn't have a signal in stereo mode is a mystery.

There is a separate stereo setup on my 4300h when doing the speaker setup. Does yours have that too?
dzzmiller posts on January 21, 2020 18:11
I'm about a week into 7.1.4 in a new room. The $20 D&M equalizer app certainly improved the experience today.

I suspect I would have had about equal enjoyment going to 5.1.2. But I'm too lazy to experiment.

I've used Denon/Marantz for two decades. I don't know why the crappy interface and documentation still surprises me. Why zone 2 plays in some modes but not others is a mystery. Why the sub doesn't have a signal in stereo mode is a mystery.
panteragstk posts on January 17, 2020 12:06

Man this lack of standardization is annoying.
Post Reply