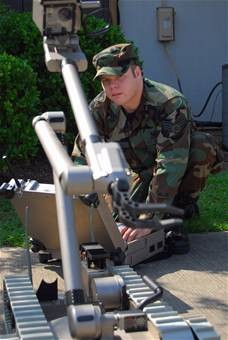 Engineers have modified a US military bomb deactivating robot to be controlled by a Wii remote and an iPhone. The engineers just love their gadgets, but this could be one of those out-of-the-box solutions for a very serious problem. What’s next, Hasbro’s Easy-Bake Oven to help the fight against world hunger?

David Bruemmer and Douglas Few are engineers at the US Department of Energy that have modified a Packbot, that’s the robot used by the US military to sniff out and diffuse bombs, so it can be controlled by the Wii remote control. They’re even streamlining visual images and readings captured by the robot to be controlled using the iPhone’s touch screen rather than the significantly more cumbersome laptop.

The US military has been using the Packbot by iRobot, the company that gave us the Roomba robotic vacuum cleaner, for years. Soldiers have been controlling the Packbot using a joypad similar to a conventional game-pad used on Xbox 360 or PS3.

“Our tests show 90 per-cent of the operator’s workload goes into driving the robot rather than keeping an eye on the sensor data,” Bruemmer says.

The engineers hope to overcome the flaw with the Wii-mote’s intuitive motion sensor capabilities. This would allow soldiers to focus on the data gathered by the robot which they will now read through an iPhone rather than a laptop. The engineers at the US Dept of Energy believe iPhone’s touch-and-slide interface will make scrolling through data gathered by the robot faster and more intuitive.

Bruemmer and Few have even incorporated the Wii remote’s force-feedback (vibration) feature. A vibration on the controller could warn the operator of special circumstances, such as detecting the presence of people around the bomb site or a victim trapped inside a building.

With the stakes so high, hopefully the engineers have time to think this through and give it thorough testing. The conventional game-pad uses only your thumbs but the Wii remote uses your whole arm. It could be tragic to have your Packbot holding down that fatal red wire with a fatiguing contortion of the right arm. It’s far easier on the body to just press your thumb down on a button.

The problem raised by the statistic that says 90 per-cent of the operator’s cognitive attention is placed into controlling the robot rather than managing the valuable readings from the device sounds serious. Could there be room for a bit of human-usability auditing?

Engineers will often design amazing and wonderful devices and software, but you need to be a fellow engineer to make it work. I wonder if Few and Bruemmer asked the soldier’s themselves how they could improve the usability of the device.

Wiimote and iPhone have brought tangible ease-of-use and fun-factor to their respective consumer electronics. But are there tangible gains to using them in military bomb operations? Or does it sound like the Bruemmer and Few households had a gadget-filled Christmas last year and they’re just sad it’s over?