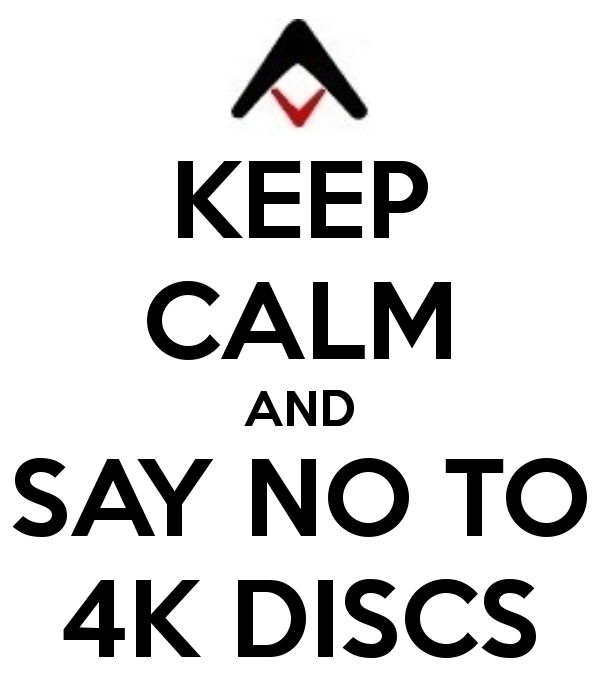 Or scream madly, we won't judge you

I still have nightmares about the HD wars, when Blu-ray and HD DVD were fighting it out to see who would control the landscape of the high definition future. It wasn't pretty, it wasn't pleasant, and I still have HD DVD movies on my shelf with no way to play them (well, technically I still have an HD DVD player but who keeps a player in your system just because of a handful of movies?).

The other day, I came across an announcement from Sony and Panasonic. They have banded together to create a new optical disc standard. This is what I read, " Sony Corporation (‘Sony’) and Panasonic Corporation (‘Panasonic’) today announced that they have signed a basic agreement with the objective of jointly developing a next-generation standard for professional-use optical discs..." A cold shiver ran down my spine.

"Not again," I whispered to myself because I work from home and there is no one around to give me weird looks and report me to my boss as being 'creepy again'.

The last thing we need in this industry is a new format war. When Blu-ray and HD DVD were duking it out, it was 2006-2008, about the same time the housing market in the US was at its peak. While the housing market was about crash (and was in decline during part of the war), many of us were in denial about the whole thing. We still thought it would rebound. Of course, we now know it didn't but the fact remains that the format war wasn't the most important thing on our radars. Frankly, there were still a lot of people with a lot of money that were willing to buy one or both of the formats.

These days, wallets are considerably lighter.

A new format war can only do one thing - fragment an already shaky industry. Customers are still very aware that 3D was shoved down their throats as being something they 'needed' and they have lost a lot of trust in what the manufacturers say. It is one thing to have people on or who listen to the AV Rant podcast and those that comment on the articles here to prefer 2D. It was quite another when I was in line at the theater the other day to see Pacific Rim and heard a person in front of me say, "But, is there a non-3D showing?"

If that doesn't speak volumes, I don't know what will.

The problem is that Blu-ray discs, as we know them, cannot support 4K (aka Ultra-HD). The standard disc that you buy at the store with your favorite movie on it is a dual layer disc. Each layer can hold up to 25 gigs of data. The first movie available in 4k was 160 gigs. That would take a seven layer Blu-ray at the very least. While there has been talk of expanding Blu-ray to include these additional layers (and more - the largest number I've heard bandied about was a terabyte), and there have been claims that current players could access these levels with firmware updates, nothing is firm yet.

When I saw the 300 gig new optical media story, my brain jumped to the conclusion that Panasonic and Sony where about to release a new type of disc. That doesn't seem to be the case. Both Sony and Panasonic have been developing a cartridge system that holds multiple discs for long term storage of data. Having higher capacity discs means each cartridge can hold more data. Having a universal standard just makes sense in the long run.

But we must steel ourselves. When HDMI came out, it wasn't because the current video solution (component video) couldn't handle HD. It was because they wanted a cable standard that would reduce piracy. The added benefit that you could have a one cable connection (with video and audio on the same cable) was the selling point for the consumer. But they didn't tell us how expensive HDMI would be to create, how many problems we'd have with long (over 25 foot) runs, or how terminating in the field, something often done by customer installers, would be near impossible.

No, we don't need a new type of optical disc for 4K. Blu-ray can work just fine. But if one of the manufacturers thinks they can make a buck or get some sort of monopoly by introducing a new format, don't think they wont.

Look at the detailed specifications for yourself.
jinjuku posts on August 29, 2013 16:18

BTW that is a UHD spec

j_garcia, post: 981366
I was standing farther than 4ft at the store, which has horrible light control, and the clarity of the image was still quite obvious.

With 4k, if it is 3840 pixels × 2160 lines, it would be 4.23 feet from a 65 inch TV to see the full detail present. But anything between that and 8.45 feet from the 65 inch screen would look better on a 4k TV, because one would be too close for 1080p, and 4k would be perfect, as far as resolution is concerned.
j_garcia posts on August 10, 2013 11:44
I was standing farther than 4ft at the store, which has horrible light control, and the clarity of the image was still quite obvious.
Post Reply