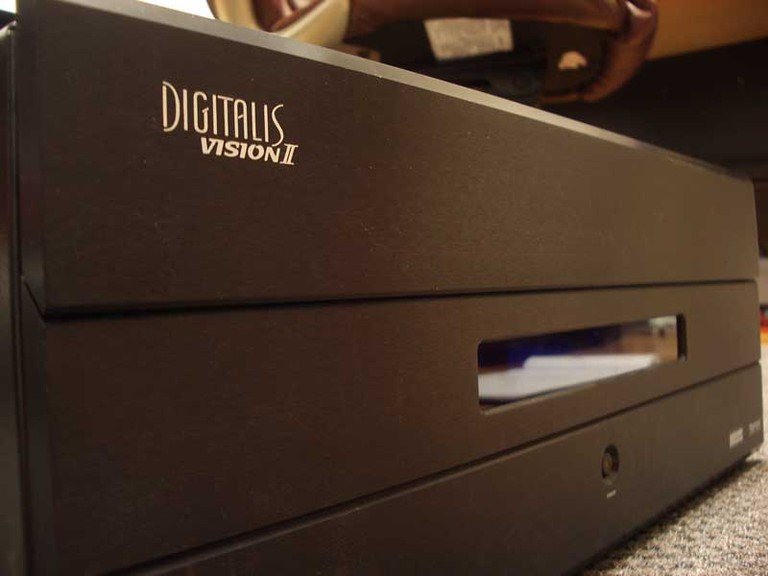 I tried... real hard. The idea of an HTPC is incredible. It's a stupendous idea. I mean, take an ATSC HDTV tuner, an HD-DVR, a DVD player, your entire DVD and CD collection, Internet music, your favorite HD-DVD player - and roll it into a single box. That's the Home Theater PC. Heck, you could even play games on it, but that's not the main point. Manufacturers all over the globe have contributed to this technological snickers bar of home theater devices by adding parts and accessories to make the experience more and more advanced and slick.

You can get a retractable LCD touchscreen, for example, that sits on the front of the box. You can have a double-sided dual-layer DVD burner. Those HDTV tuner cards I mentioned? Try dual HD tuners with QAM support. Now add two cards and go for recording 2-3 shows at the same time while watching one back... HDTV is for people who want it all - and they want it slick and glossy. They want to rip all their DVDs to a giant pair of 1 terabyte hard drives in a mirrored RAID 1 configuration so they can have instant access to all of their movies. They want their entire 1,634 CD music collection ripped into lossless FLAC format so they can play back any track they want, anytime, and output it via analogue or S/PDIF digital.

Now substitute "they" with "you". You know you want it.

HD DVD and Blu-ray Disc? Yeah, we got 'em - load it up and go, though successfully ripping those formats is still being tackled by the underground hacker community. I have the utmost confidence in them. The studios and manufactures are just not bright enough to stop them forever.

Want to check the weather? How about the barometric pressure in Canada where you favorite loudspeaker company lives? Stock market tickers? Favorite (ahem) website? I'm pretty sure that out there somewhere is a widget that animates the falling US dollar in some sort of graphical hieroglyphic.

Want to control it all with a gyroscopic mouse? How about tying it into your Universal Remote system with IR emitters? You're covered.

Need it wireless? Wired? Configured as a server for transferring music or videos to other systems around your home? That's not really a problem.

Oh, what's that? You want it to work? Properly? All the time?

Imagine a car that you built yourself. Now imagine a car that has parts made all over the world, by different manufacturers - some big, some small. None of who work together on a regular basis or have any true way of testing their products with the mass accumulation of the sum total of parts available. Microsoft makes the engine. Kingston's got the carburetor. The transmission is by MSI and the cooling system is by Thermaltake. The electrical system is by ATI and a the tires were shipped in (aftermarket) USPS from Seagate (the rims are made by Vantech). The whole thing is held together by a chassis made by Silverstone.

Oh yeah, the radio is by ADSTech, the power steering system was added through a company called Logitech and the brakes are manufactured by nVidia (who also makes electrical systems but theirs isn't in this car).

You start up the car and it hums nicely, except that when you go to activate the cruise control there's some conflict between the nVidia and ATI systems. They don't seem to want to talk and as a result the cruise control activates but wants to keep decreasing the speed until the car stalls. For some unknown reason this also causes the windshield wipers to leave streaks on the windshield which won't go away. You visit the manufacturers' website (there is not all-encompassing warranty on this car cause you built it yourself, remember?) Unfortunately they simply tell you to uninstall the electrical system and reinstall it after you first install the brakes.

This goes on for weeks. Nothing ever quite works perfectly. There's alway some... glitch... some issue waiting to be troubleshot and remedied.

I'm throwing away the car. Seriously, I'm done. My experiment with the home theater PC is over. For now.

I thought that perhaps some dedicated companies that manufactured entire systems would be the solution. After all, if THEY are responsible for testing and ensuring that all the various pieces of the puzzle work together then thing should run a bit more smoothly, right? Without broadbrushing the entire industry, it turned out that this wasn't necessarily the case. Additional issues crept up and the HTPC built by Joe Company, while light years ahead of my own Frankenstein creation, still had it's share of glitches, some of which never got resolved. It was like watching my 4 year old try to hold on to a wet bar of soap... just when you think he has it, it slips out again.

While that PC is back in the shop, mine is still here... laughing at me... mocking me. Daring me to continue to press on and make it functional. Make it work. Well I'm done. I won't be baited any longer. Maybe someday Apple will come out with a real HTPC and I'll take another look. It will likely cost $15,000 and only do three things, but it will do those three things exceptionally well.

Anyone want a HTPC? I'm serious, send me an email and you can pick it up real cheap. REAL cheap.

All really depends on what your plans are. IF you want a HD DVD/Blu Ray playing HTC then you'll want a more beefy system with Intel Core 2 Duo, 2 gigs of ram and atleast an 8600GT or 2400HD.

Now if you just want a simple HTPC that plays back DVD, media files, music, and does some DVRing with tuner cards then you can easily get away with lower end/older hardware.

For example my current HTPC specs are as follows:

I think thats really about it. Its honestly just a matter of getting the right hardware for the right setup. and I also have to agree that the hardware used by the OP was really a half arsed setup and was honestly doomed from the beginning.

jvgillow, post: 324989
Myself and a couple close friends all have HTPCs (at least part-time HT, part-time gaming), and this article rings so true. It's easy to spend several weeks just getting things working properly, and we are all “computer people”. I can't imagine how hard it would be for someone who doesn't understand the ins-and-outs of hardware drivers and media codecs.

Thanks for that honest input. I have no problem with people wanting HTPC's, and some people will want to argue pro/con. Just because something is hard to work with or needs tinkering doesn't make it invalid. Some people dig that. For others it's a nightmare. Anyway, thanks for such a candid post.
Wakefield103 posts on October 31, 2007 14:27

autoboy, post: 324703
Wow, what a hodgepodge of computer parts. When I read the article I felt bad for you because I had the same stupid issues with my HTPC, but then I saw the parts you used to build it and I feel even sadder for you. Seriously, you need a REAL HTPC built by someone who knows how to build a HTPC. One that is quiet, cool, attractive, stable, and efficient. The software, now that is the REAL problem.

autoboy, what parts would you use to build a HTPC?
Post Reply
See also:
About the author: