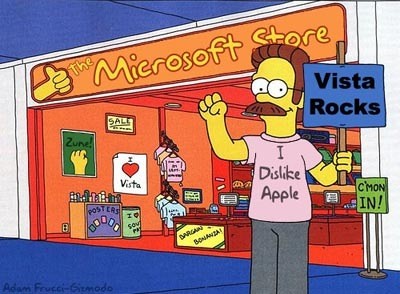 You may have heard that Microsoft now plans to open a chain of retail stores. It’s a sure way to present your products and encourage Windows shopping at the same time. But given the economic uncertainty almost nobody thinks it’s a good idea to open a new retail electronics chain. But it worked for Apple! Hasn’t Microsoft made a living copying its fruit flavored nemesis?

With the recent demise of retail outlets like Circuit City and Sound Advice it doesn’t seem like a good time to start a new chain of electronics stores. But to lead the charge Microsoft has hired the talents of David Porter, a 25 year veteran of the Wal-Mart success story.

Please Mr. Porter - don’t bring us another retail store employing greeters! Those people are scary. And don’t try anything funny like beginning the Microsoft Store experience with a cheery version of the Windows Start .wav file. The mere thought of it is enough to make me want to unplug something.

Microsoft clearly does not have history on its side when it comes to technology-based direct sales retail outlets. IBM tried it in the 80s. Today we could call the IBM Store experiment an Epic Fail.

Another notable direct-seller in the computer industry was Gateway in the mid 90s. The chain seemed to do very well for a time, peaking at 326 stores across America. But it closed the last one down in 2004.

This brings us to the biggest technology direct-sell success story, Apple. The Apple Stores opened in 2001 in the midst of the .com bust. True to Microsoft’s copycat tactics the Seattle software giant has even waited for another economic downturn to begin its retail chain. It’s such a crazy idea – it might just work!

The Marketing Doctor agrees. The positive ray of sunshine for Microsoft is that it proves the company realizes it’s brand is in trouble.

Vista has gone over like a lead zeppelin and spread a contagion of bad press across the company it’s having a hard time shaking. Even the newest “I’m a Mac/I’m a PC” TV commercials from Apple are making fun of Vista.

Microsoft's portable music experiment Zune has been the brunt of so many jokes that it'll soon have its own chapter in upcoming joke books.

“Okay, this Zune walks into a bar…”

Then, as if to prove Microsoft has totally lost touch with reality, it rolled out those strangely sonambulistic TV ads featuring Gates and Seinfeld. They were such a bust for the company that it’s backed out of what was to be a major marketing blitz.

What Microsoft really needs is to get back to the basics of building its brand. Get back in touch with its customers at the street level. A retail store is one way to accomplish this.

Sure, there are never any guarantees, but at least it’s a positive step in the right direction for the company.

Can't possibly be as annoying and misleading as the Mac vs PC ads
Wayde Robson posts on March 02, 2009 08:56
I haven't seen those new comercials, they sound interesting.
slowlybuilt posts on February 27, 2009 05:50
Have you seen the newest microsoft commercials? The ones with the cute little girl uploading, ‘fixing’ and then emailing a picture to her mom made my GF melt. I think it is a very effective ad, and I like to tease my gf, telling her that's what our child would look like if we had one.
lsiberian posts on February 26, 2009 13:25
Will they paint the walls blue.
Djizasse posts on February 26, 2009 04:04

LinuxMintisbest, post: 529166
This is awesome I love it. I can stage a GNU/LINUX and FOSS rally by the store to give out free live cds to those who want to save $$$ and be FREE and secure. Microsoft is dying a very slow death. I give it maybe another decade. UBUNTU has came farther in less than 5yrs than M$ has in a decade (comparing 98 to vista and 4.06 to 8.10)