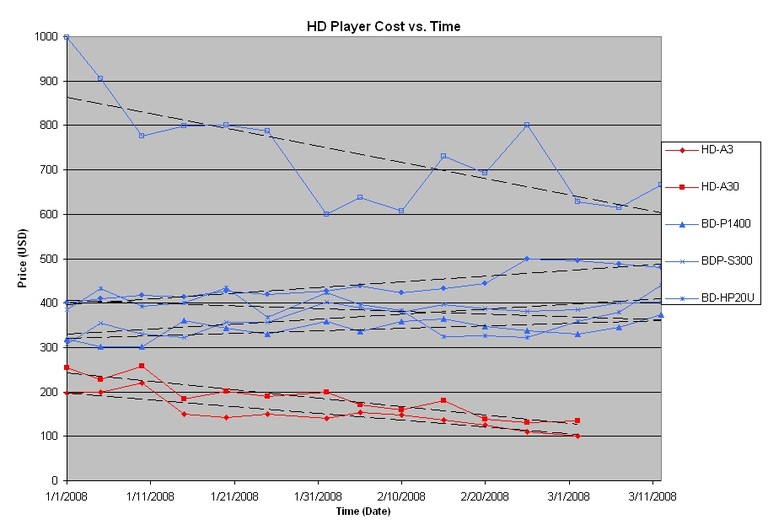 Looking for a cheap Blu-ray player?

That would be price.

The long awaited end to the format war may help consumers by clearing up some confusion created by choice in HD optical discs, but it is not bringing about better pricing to the consumer.

Based on price comparison research performed by TG Daily, the demise of HD DVD and the industry charge to embrace Blu-ray Disc (BD) does not seem to be increasing market competitiveness that invariably should lead to reduced prices. Worse, current prices for players on the market are not just stagnating, but are actually drifting back up.

Based on pricing data collected using the PriceGrabber search engine, TG Daily has identified the lowest weekly price offered by merchants on four dedicated BD players, two HD DVD players, and one combination player over a timeframe from the first of the year up to the second week of March. Plots of the data show some interesting trends that emerge.

Not surprising, dedicated HD DVD players have had a consistent downward trend with a few upward bumps such as after the Super Bowl and immediately preceding Toshiba’s announced surrender. The majority of the dedicated Blu-ray players all have upwards trends with a few downward price bumps. The most erratic pricing is for the BD/HD DVD combo player burdened with the highest price to allow support for a defunct format. The LG combo player saw several $200 drops up until retail started dropping HD DVD support and Toshiba threw in the towel spiked the prices back up $200.

I added linear trend lines to the data that clearly show 3 of 4 Blu-ray players with upward pricing trends while any player with HD DVD capability undergoing a downward trend. The one player, the Sharp BD-HP20U that shows an overall linear downward trend has shown a significant upsweep with the steepest price increases over the last week of February and first weeks of March, borne out when the trend lines are revised to a 2 point moving average. As of March 12, three of the BD players are at their highest price of the year, some nearly 40% of previous lows, and the fourth is at a near high. TG Daily went one step further and correlated the plot of BD-capable player pricing with the various occurrences that lead to the demise of HD DVD. When taking a look at that plot things get even more interesting.

Every time HD DVD received bad news, prices charged by merchants tended to jump up on Blu-ray players. Now whether this is purely due to the merchants looking to take advantage of consumers or if it came from adjustments in behind the scenes wholesale pricing subsidies from the manufacturers is unclear. What is clear is that every time the format war took a step closer to endgame, Blu-ray players got more expensive.

The BD price increase also does not include another cost factor: none of the players has included the five free movies since the end of January. This deal went away with HD DVD, further decreasing the value proposition of the players to the consumer.

Over the course of the format war, many industry pundits and enthusiasts who preferred the BD format cited that wider manufacturer support would be a source of increased competition even after a single format was established and that HD DVD, with just a single manufacturer, appeared to be a defacto monopoly. HD DVD supporters would often counter that the BDA behaved more as a cartel with most of the manufacturers steering clear of the pricing competition that HD DVD was applying to BD.

Taking a neutral stance to examine these two points of view, I think that HD DVD was only manufactured by Toshiba because it was a clear underdog and most manufacturers were hesitant to commit resources on the long shot (born out by the Onkyo debacle). Now couple that with the higher price of BD players, there was more revenue potential from BD players at the same percentage profit margin. The hardware manufacturers were hoping by banding together that they could force a more expensive technology on the market. Toshiba was not looking to exclude competitors from the HD DVD market; the other manufacturers saw an opportunity to try to push the market to a more costly option.

On top of everything else, none of the players are profile 2.0 and some are not even profile 1.1 capable. All of these players suffer from BDA's incomplete specification when they came to market despite costing twice as much as HD DVD, which included functionality equivalent to profile 2.0 from the start. And odds are that the first BD players to market that actually include profile 2.0 functionality will likely charge a premium.

Meanwhile, a number of manufacturers such as Pioneer and Denon are not even bothering with el cheapo $400 players as BD players from either of these midrange manufacturers cost at least $1000. Even then, the manufacturers do not make it clear that the players support profile 2.0, likely meaning they don’t or it would be up in lights. Pioneer has two players at this price, one does not support HD audio bitstream out, one has an Ethernet port but talks up a network picture viewer, and neither mention the secondary A/V processor necessary to go profile 1.1. Denon does makes mention of Bonus View functionality in both its $1000 and $2000 players, but for a grand, no multi-channel audio out, and for two grand, no profile 2.0. Sony at least has models debuting which are Profile 2.0-ready (via firmware).

What we are all left with in BD’s victory is a more expensive format, incomplete specifications, players with built-in obsolescence, and bunch of manufacturers in no hurry to get inexpensive players to the masses, which is what is necessary to make the format survive, much less thrive. The $200 dollar mark is where many analysts say that mass market adoption starts to occur, above that, it's just technology geek early adopters.

So much for the supposed competition to come from within the BDA cartel.

allargon, post: 391357
Clint, I'm not sure where you've been. However, Denon plans to do just such a thing this spring. Well, they forgot about the Ethernet connection. It's only a profile 1.1 player. Moreover, it's $1k.

Clint DeBoer, post: 390692
Blu-ray has the capability of being a simple transport with newer AV receivers equipped with HDMI. With this being the case, I see no reason why someone can't offer a line of very inexpensive players that handle all the new formats and have only a power, HDMI and Ethernet connection on the back by Christmas. Nothing else.

By all means make the others as well, but a line of inexpensive Blu-ray transports would be a good thing for the market.

Clint, I'm not sure where you've been. However, Denon plans to do just such a thing this spring. Well, they forgot about the Ethernet connection. It's only a profile 1.1 player. Moreover, it's $1k.

Davidt1, post: 391241
Just got back from Fry's and BB. More and more BR titles are selling for $15. I saw some people buying BR stuff. I hate to say it but it appears that BR is here to stay. It will take off big time once players sell for around $200.

Are you sure those aren't the same people that always show up for a sale? It's been a good while since there's been a decent sale on Blu-Ray media. With this and the Target BOGO, people decided to show up again. I do agree that sales will take off once players come below $200.
Davidt1 posts on March 21, 2008 13:14
Just got back from Fry's and BB. More and more BR titles are selling for $15. I saw some people buying BR stuff. I hate to say it but it appears that BR is here to stay. It will take off big time once players sell for around $200.
dobyblue posts on March 20, 2008 11:56

Clint DeBoer, post: 390692
By all means make the others as well, but a line of inexpensive Blu-ray transports would be a good thing for the market.

According to Warren News (http://www.warren-news.com/CEservices.htm) and Consumer Electronics Daily, Wal*Mart are expected to have the Funai-made Sylvania player on their shelves for no more than $249 by Q3/08, so what that price will be over the last fortnight or so before Christmas, and on Black Friday, is anyone's guess, but less than $249 would be a starting point.

This will support bitstreaming of all the audio formats, ethernet port and Bonus View, as well as HDMI 1.3.

They absolutely will not. It doesn't really matter what happens over the course of the next few months, it is Q3 and Q4 that will be very telling for whether or not Blu-ray has a chance of being mass market adopted. By that time both Paramount and Universal (as well as Weinstein) will be releasing on Blu-ray and the consumer market will be there for the taking. Now we just have to wait and see.

Universal won't get anything out on Blu (they were pretty caught out) until this Summer, which means two of their biggest movies, The Incredible Hulk and Hellboy 2, will see the light of 1080p24.