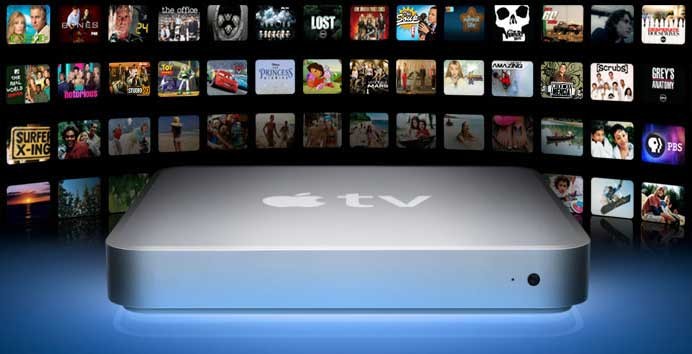 After just finishing at CES with the apparent win over rival physical format HD DVD, Blu-ray will again be challenged for title home video successor to the DVD. The latest threat is from Apple’s iTunes:

Steve Jobs has opened Macworld 2008 with an announcement that iTunes has deals in place to rent movies from every major Hollywood studio and that rentals will be available in HD. Currently, iTunes already claims more than 7 million movie download sales, a number that exceeds sales of both physical HD formats.

Apple has also disclosed rental terms with pricing for new titles and catalog titles at $3.99 and $2.99 respectively with a $1.00 surcharge for the titles in HD after an iTunes software update. Renters will have 30 days to begin watching a title and 24 hours to finish a title once viewing has begun. Renters are said to be able to watch the movies on Macs and PCs as well as the iPod and the iPhone.

Meanwhile, back at CES, the recent BDA press conference was quite bullish and featured claims of expected strong growth for the Blu-ray format in 2008. The BDA cited conservative projections for hardware sales of 2 million set top BD players and 4 million PS3s. Combined with the 3.7 million PS3s and 0.5 million set tops currently in the US, the BDA expects to top 10 million players by years end.

The BDA press conference was followed by a bear of an NPD conference that illustrated the problems Blu-ray will have to deal with before mass adoption will occur. Consumer confusion remains high with NPD surveys showing that 80% of people claiming to have bought HD media had not because the titles were presently unreleased. This consumer confusion was also true of people making claims of purchasing an HD player. NPD also found that the format war itself was not the real barrier to buying into one of the new formats. Of the participants in a survey of people who were unlikely to buy an HD player:

Numbers like these related to HD player price coupled with no desire to replace perfectly good DVD players should certainly lead to questions of why Warner would chose to back Blu-ray as the way forward to jump starting mainstream HD disc sales when they require more expensive players. Mainstream consumers really don’t care about the format war per se, but they do care how much it is going to cost to upgrade to the new player, especially when there is nothing wrong with the old one.

Statistics from Black Friday show that HD optical discs players have a long way to go with only a 10% market share of player sales compared with SD DVD even with the best sale pricing of the year to move players.

After smiting HD DVD based on title availability, what will Blu-ray have to compete with as far as titles available for rental from iTunes?

Wait, aren’t most of these studios on one side or the other in the optical disc format war?

With every major studio on board, BD will effectively have to fight the equivalent combined might of itself in addition to the exclusive titles available on HD DVD.

Just goes to show that if one sales pitch to sell movies does not work, the studios will abandon any consumers who did spend money for the next greatest thing in a second. Looks like Warner wants to make sure it can cash in on physical discs while the opportunity still exists.

This should be interesting for Sony who, who unlike the other studios, also has a direct interest in the competing Blu-ray hardware format. The uncomfortable damned if you do damned if you don’t position for Sony is that the studio side of the business has to go along with the download model or risk early growth revenue while risking the R&D investment by competing with Blu-ray.

Read the Complete Thread
kstich posts on January 19, 2008 01:23
Unfortunately, I think that downloadable HD movies are a long way off in Canada. If it is anything like the music download services we will be years behind the US. I remember when Rhapsody and the like first came out; after a two years of waiting they offered a quarter of the songs for twice the price. At least with physical formats they have no reason not to sell/rent them here.

I have no doubt that people will rent and buy from imovies I just dont see how this is going to be the end of HD-DVD or Blu-ray. I agree that this will probably be the future but I belive it will be the “next” step in movie formats. For now I belive the format is Blu-ray and HD-dvd at least for another 10 years or so. I think once the tv & pc merge into one device and hard drives get bigger and cheaper and we have faster internet connections i belive then it will time for the next step. Im not sure why some people seem to want blu-ray and hd-dvd to fail but I just dont see how it can. Just my 2 cents.
BMXTRIX posts on January 16, 2008 19:00
Follow up:

Don't get me wrong, I think that HDDL has a huge potential in the rental market to replace Netflix/BB Online. Netflix has already started to embrace this with unlimited streaming downloads, but it can truly be taken to full integration…

Imagine being able to set up a queue on your TV for movies you want to see. You pick your resolution of choice (480i, 480p, 720p, 1080i, or 1080p) and then you add movies. You pay more for more bandwidth (1080p) but the service is a flat fee, rent what you want scenario. No STREAMING! The players download in the background when you sleep. Instead of getting them in the mail, they just appear inside the box and you play them when you want to - for as long as you want! The big caveat is the standard Netflix/BB one - only 2 movies or 3 are available to you at any one time.

You can watch a ‘rental’ as many times as you want, for as long as you want, but when you want something new, you must ‘return’ the movie. Just one click, and it's returned. Then the new movie becomes available within 24 hours. The big perk is that the movie you want is ALWAYS available to you within that 24 hours. The other perk is that certain titles - like new releases, could actually download far ahead of the actual release. Give a person 100GB and they could store 5+ movies on their system, but only have access to two or three at any time. So, the rest sit there in the ‘queue’ for later viewing.

It all ties in with music and advertising and can work phenomenally if implemented correctly.

But, the $3.99 for limited viewing over a short time period? That's just insane. I own about 25 Blu-ray movies and I paid $15 or less for each one of them. They are mine - I can watch them as many (or as few) times as I want. With a 3 year old in the house, Ratatouille has been through its paces at least a dozen times already.

This technology could, eventually replace optical media - but it will require (REQUIRE!) a service that stores your order history and protects you against data loss. A fried hard drive = buy a new hard drive, then reload your collection. It requires networkability, and TVs with built in decoding for video streams via wi-fi. It requires portability… somehow.

It definitely is a cool concept, and I LIKE AppleTV. I've used it, and I could definitely see using it as a media server if the damn thing could see my DVD collection that's stored on my networked hard drives (it can't). But, I could use my PS3 just as easily… or an X-Box 360. In fact… I'm not sure why I would spend the money on an AppleTV when I do already have a PS3 that will likely be able to do most of it's functionality, play my Blu-ray movies, and games as well.

We'll get there guys, but not today… and I sure as heck wish this site would embrace HD optical discs instead of continuing to pretend they are SACD or DVD-A. It's video guys, and my smallest TV is 32" - not exactly an MP3 loving pocket display. HD is the buzzword.
aberkowitz posts on January 16, 2008 17:31

patnshan, post: 358922
I think download HD is not ready for prime time. I think all the issues BMX listed are valid. I am into renting movies, so it does sound like a good deal for me if it doesn't take an hour to download. I do have a 7 MB/s cable, so it may work. I am likely to try one to see what they are able to do already.

I have VGA + digital coax from my HTPC to my projector. I only have the built in Nvidia 6150 video card. I am wondering if one will need a new video card and such to handle this????

admin, post: 358884
After just finishing at CES with the apparent win over rival physical format HD DVD, Blu-ray will again be challenged for title home video successor to the DVD. The latest threat is from Apple's iTunes. Steve Jobs has opened Macworld 2008 with an announcement that iTunes has deals in place to rent movies from every major Hollywood studio and that rentals will be available in HD. Currently, iTunes already claims more than 7 million movie download sales, a number that exceeds sales of both physical HD formats.

This is not even a fair comparison. iMovies is a rental service, not a buy to own. The article is comparing Apples numbers to physical media sales. What they need to do is compare their numbers to the number of all DVD's, Blu-Ray discs, and HD-DVD's rented world wide. This would include all rentals from places such as Blockbuster, Netflix, etc. I beilieve the numbers would look alot different then. So, come on lets compare “apples to apples”. Pardon the pun.
Post Reply