But I Already HAVE a DVD Player! 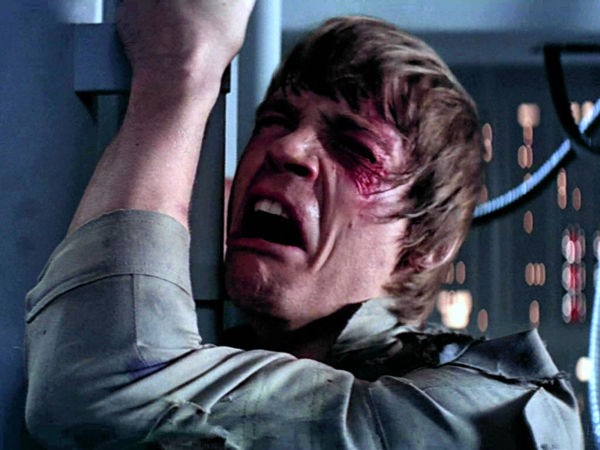 Not another DVD player?! Nooooooo...

Clint's not the only one that thinks the High Def Disc War has already been lost.

I've stayed out of the high def format debate mostly because of apathy. I honestly don't care. I don't own a player, have no real desire to run out and buy one, and I know a lot of people that feel the same way. It was a conversation I had over the weekend with a PS3 owner that started me thinking. Of course he was complaining about the lack of games but what was more interesting was the complete LACK of mention of Blu-ray. Why? The box is in his living room, hooked up to his stereo (I assumed), and connected to his TV. But he never mentioned the Blu-ray capacity.

Before either of the new formats was released, I had formed an opinion. Blu-ray was going to win. Why? PS3. The installed base that Sony was sure to have based on the sales that they KNEW they’d realize from the console was a shoe-in. The box would be in the living room. It would be hooked up to a TV and (hopefully) some sort of surround system. All they’d have to do was buy the discs. Right?

So far, there does seem to be an effect. Lots of Blu-ray players have sold and Blu-ray discs are outselling HD DVD discs as well. But hold on – what about attach rates? Well, if you ask an HD DVD pundit, they’ll claim that the attach rates (number of sales of discs per player) for HD DVD are higher than Blu-ray. We all know in a numbers game, it is all in how you count. Blu-ray people count PS3s as Blu-ray players (even though 60% of the owners don’t know about the ability) and it seems that nobody counts the HD DVD add on to the Xbox 360 in their numbers (maybe because sales are so low?).

I asked my friend if he used his PS3 to view normal DVDs, he didn’t because he already has a 5 disc DVD changer. He didn’t even know about the upconverting feature or the improved sound quality. The games have been so bad on the system that he’s only played it once and he never got around to integrating it into his HT setup! His excuse for not knowing all the features was because of the obscene amount of paperwork that arrived with the PS3.

Let’s forget about the numbers and talk word of mouth. I’m talking with my friend that has a PS3. He’s owned and loved the PS2 so he was sold on the PS3 even before it came out. The Blu-ray was a bonus for him. He doesn’t use it to watch movies, (up until now) he’s only played it once, and he doesn’t buy Blu-ray discs. Why? It isn’t because he isn’t buying movies – his collection is easily 10x the size of mine. No, it’s because of two things – first, he doesn’t have a high def display (and isn’t planning to get one any time soon) and second, he’s waiting to see who wins the format war.

So, out of the 1.5 million or so PS3 owners, only 600,000 or so even know it has a Blu-ray player. Some percentage of them will buy Blu-ray discs but (and this is the important part) some won’t. On purpose. That’s telling about the mindset of the common consumer. Some will realize that their standard definition CRT won’t see a benefit from the increased resolution of the Blu-ray while some will watch the bundled disc and come to that realization without understanding why (resulting in a whole new group of skeptics who are spreading misinformation as we speak). But some, I believe, will understand the difference, have the equipment to realize and experience it, but will still choose to purchase DVDs. Why?

Let’s harken back to the VHS / Betamax war. We’ve all heard the stories, the accusations, and the innuendo. There are many reasons that Betamax lost but two of them are because of the longer recording time of VHS and the fact that the VHS players hit that magic $200 price point first. Most people don’t care about quality. They don’t get it, and when you explain it to them they don’t care. Just listen to AVRant to get an insight into this phenomenon. Dina gets it, to a certain extent, because she has too. But you can hear in her voice that many times she just doesn’t care. Sure it looks better, maybe it sounds better, but if it went away the next day, she wouldn’t miss it for a second.

That’s the attitude of most of the people out there. They didn’t care that Betamax had better resolution or that the tapes were smaller. They cared that VHS came out with a two hour tape and Betamax only had an hour. You can’t copy a movie (or even a night of TV) on an hour long tape. That and the price of the players seriously affected the outcome of that “war.”

But don’t forget that VHS and Beta weren’t the only games in town. Laserdiscs came out soon after and offered much improved picture and sound (the first 6.1 DTS track was on a laserdisc) and as you can tell, that really took off. Sure it was annoying to have to flip the disc every 30-60 minutes and they had some QC issues but what the real nail in the coffin? My opinion it was a lack of recording ability. People were just starting to buy tape players and weren’t about to spend more money on a format simply because it looked and sounded better. With a VHS or Beta player, you can pirate movies, record TV, and (eventually) play home movies. Quality of picture and sound just can’t compete with that.

Let’s say the HD DVD camp wasn’t filled with penny pinching, money grubbing, idiots and priced the hybrid HD DVDs the same as their Blu-ray twins. Would that make the difference? I don’t think so. Why would someone with a DVD player pay more for a hybrid HD DVD? I know I wouldn’t. But I might decide to go with HD DVD as a purchase choice when deciding between the two players if I knew hybrid discs would be available for the same price. Sort of a “piece of mind” thing just in case HD DVD loses.

Universal players aren’t the answer either, no matter what you hear on the Internet. Look at DVD-A and SACD. These are two competing formats that have plenty of universal players out there. But how many people do you know invest in a player simply because it is a universal player? Not many. Upconverting features sell, but not the fact that it plays SACDs or CD-RWs or DivX or any other obscure niche format.

Of course we could keep holding out hope for a dual format disc with HD DVD on one side and Blu-ray on the other. Um... don’t hold your breath. This isn’t Dolby and DTS people. These aren’t two features on one format competing for the consumer’s attention. These brands are already labeled. There are Blu-ray discs and there are HD DVD discs. If you put them both on the same disc, aside from being completely redundant in terms of quality, it only makes things more expensive, not less confusing. Joe consumer now has a player that plays DVD’s (and maybe SACD and/or DVD-A) and one or both high def formats. When he goes to buy a disc, which does he choose? If history has shown us one thing, he reaches for the cheapest one.

What’s round, shiny, and can play music and/or movies? About 20 different types of discs. DVDs, CDs, CD-Rs, SACDs, DVD-As, and now HD DVDs and Blu-rays. Enough is enough! We’ve all seen the shiny round disc. We use the old ones for decorations and coasters. The magic is gone. If you really want to capture the public’s imagination, release a NEW format and I don’t mean another stupid shiny disc. Make it square, oval, make it the shape of a crystal or Mickey Mouse for all I care. Make it solid state, give it a display, make it huge, tiny, thin, fat... it doesn’t matter. Just make it different. People have been handling the same media for YEARS now. If you really want to get them excited, release something different.

At this point, I don’t even think it matters if it has more resolution than the current high def formats. Joe Consumer doesn’t care how many lines of resolution it has. He (or she) cares about perceived value. Think back to the VHS / Betamax debate. The deciding factor wasn’t quality; it was the perceived value of longer recording times. Right now Blu-ray and HD DVDs look, feel, and act just like a DVD player (just slower). You’re going to have a hard time explaining to most people why they should spend more money on something that seems to be so much like what they’ve already got. There is no perception of value there.

HD DVD has got a little something (not that anyone ever hears about it) in their favor – interactivity. The HD DVD release of 300 has internet connectivity where you can download ring tones (This is A CALL!!!), wallpaper, and share your favorite scenes with other registered users (not that all you early adopters don’t already have each other on speed dial). It also has a HDi game called Vengeance and Valor. Blu-ray has the ability to do games as well but their java-based implimentation has been known to be glitchy. Both of the formats should be pushing these features (and others such as interactive menus) and adding more. A hard-drive for recording TV, downloading free content and pay movies, or perhaps some sort of streaming ability (team up with Netflix perhaps?). If I were in charge, I’d stop listening to engineers who talk about upconverting, deinterlacing, and resolution and start listening to my wife, friends, and strangers. They don’t care and you don’t have enough marketing budget to make them care. Find something to add to your player/format that will capture the imagination of the public. Because if you don’t, all you’re selling is a fancy DVD player. And everyone already has a DVD player.