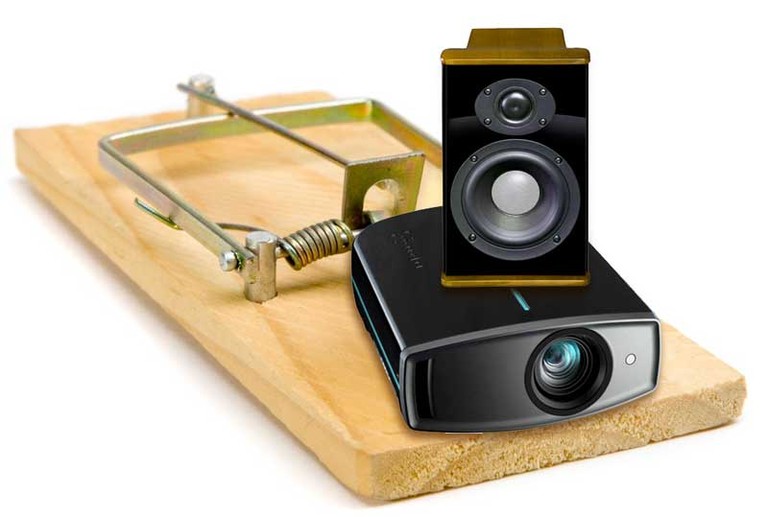 If you can't afford it, don't buy it!

I've been a big proponent of budgeting for years - and that includes spending within your means. If only the federal government were so restrained. In any case, there are natural resistors in place that hold back people from doing things they really shouldn't be doing - like getting that additional credit card when their credit score is already in the hole - or buying a house that's too much mortgage for them. When you take away those natural constraints built into the financial system you end up with a real mess - like the one we're in now with housing. I guess that single mom, or waiter, or married couple earning $50,000 per year really couldn't afford that $350,000 house after all... but the 5-year ballooning no interest loan looked so good on paper! It's not that these people were evil - they just had banks telling them "yes" when they should have said "no way!".

So what on earth does this have to do with home theater? Normally nothing... except for the fact that Rent-A-Center (RAC) is lining up to do the same thing with home theater electronics shoppers.

And they are teaming up with Best Buy.

According to an article at totaltele.com, Best Buy is setting up a new program to offer electronics to people who, in all likelihood, simply can't afford them. They are going to do this through the Rent-A-Center Acceptance program which will set up kiosks within Best Buy stores.

But who will use these kiosks, you ask? People who "don't meet Best Buy's credit standards" according to the article. These are people who have no business buying products from Best Buy in the first place and who may be exploited by the Rent-A-Center kiosks. Rent-A-Center's own website states the following:

"All you need is a place to live, a job, and a few references. You're pre-approved and there is never a credit check. "

The argument is that, since they can return the merchandise at any time, these consumers aren't really incurring any debt - and so this is a service to consumers who can't afford to buy what they want.

Poppycock. This is the worst idea since Circuit City fired all of their commission-based sales people (and promptly folded a year later). If Best Buy is going to allow RAC to offer its customers the option to pay what is essentially an equivalent to a credit card with 100% APR, in this economy, then I think it may be aligning itself with a company that will do little good to its reputation. Are they selling their soul?

And what's next: on-site check-cashing services in time for the Christmas rush?

It was no surprise to discover that the first Rent-A-Center Acceptance program kiosks will begin to make an appearance in Best Buy stores in the California area, and the first is due within just a few weeks. The mechanics of the system, if it holds true to the way we understand RAC to operate currently, is that RAC would buy products from Best Buy... and then rent them to consumers who can opt to pay them off entirely (owning them) for outrageous sums of money (traditionally RAC raises the buyout price of products as much as 2-3x the retail price). When you do the math you have essentially used a credit card with an astronomical annual percentage rate.

If you are reading this, we would hope that you will advise anyone you come into contact with about the facts and accounting behind a rent-to-own program. It never makes fiscal sense (except for occasional, specific short-term usage) and can really add a lot of burden to families already struggling to make ends meet. While consumers have a right to make bad choices, we're sad to see a retailer like Best Buy put profits ahead of good common sense. It's not caring towards their customers and it certainly isn't looking out for their best interests.

j_garcia, post: 827191
Or, if you can't afford it, don't buy it. Credit a.k.a. debt, which layaway is a close cousin to, is the vast majority of our economic problems (world wide, not just in the US) right now. Layaway isn't as bad, but it still means you couldn't afford it IMHO.

You always have to put priorities first of course, food, mortgage, insurances, etc etc, after taking care of those, I believe lay away is a better option than a credit card for obvious reasons. Those that are foolhardily going to get into debt will do it one way or the other. Unfortunately the economic mess is due to misuse of credit, not credit itself.

I do agree that the majority of consumers misuse credit, hence the meltdown, but I fault the banks just as much as the consumer. My credit rating is in the 900s, I've used layaway instead of cards many a times, I'm not in a rush, why pay interest to a card…..now if it's something I need, not want, I'll use card then pay off at end of month….in total.
Adam posts on August 27, 2011 09:32

That's why Alex now demands on cash up front.

Indeed leasing AV equipment doesn't make financial sense as it is. It would be much wiser for those with credit issues, to go for a 1-2 years old used equipment at 25-50% the price of a brand new piece.

H-o-w-e-v-e-r, If such a program would include an upgrade option, such that one would be able to replace his/hers equipment every 2 years (for example), that would make a great selling point for the program.

Don’t know if that is part of the offer, but if it does, I think it is deserved a second (and more sympathetic) look…
Post Reply