Apple Wants to DRM Your Shoes, Next Up, Apple Users 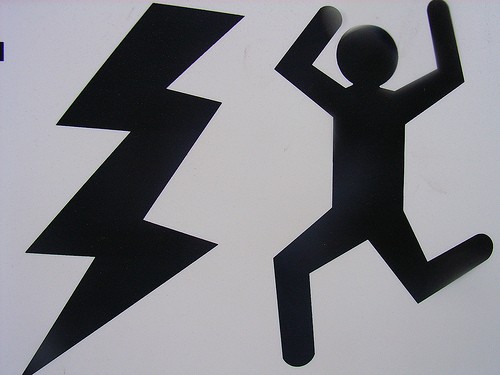 You can't run fast enough to escape the Wrath of Apple

Invasive Digital Rights Management (DRM) is everywhere in entertainment software and hardware, and if Apple has its way, it will soon be in shoes.

Apple is once again unhappy that people want to do with the goods and services they paid for as they please and not as Apple intended, the Cupertino CA based company intends to develop and patent electronic control of what kind of shoes can be used with the Nike + iPod Sports Kit.

The Nike + iPod Sports Kit, launched in 2006, involves a sensor that can be placed in a void located under the insole of certain Nike shoes that can upload running statistics data to an iPod.  Runners are fairly particular about shoe brands, which have lead to some of them purchasing and repurposing the little device for use on their favorite, ie. non-Nike, running shoes.  Some may have even purchased little pouches from other companies to facilitate this egregious act of ownership, which is likely in violation of whatever EULA that Apple probably dropped into the packaging.  How dare they.

The patent, filed in March of 2007 and recently published, details a Smart Garment that would be an electronic device to authenticate an article of clothing.  According to Apple’s patent application, it’s all just for our own good, to prevent theft of the device or to prevent use by a finder if the device is lost and not returned.  Of course, even with the DRM, someone could keep or sell the device and the new owner could then just purchase a properly authenticating shoe, or maybe just hack the device.  It all seems rather flimsy until we get to this statement where Apple lets on about their real intent.

Unfortunately, however, it is becoming more commonly practiced to place the sensor at locations on a garment (shoes, for example) that are not specifically designed to physically accommodate the sensor and/or calibrated to accurately reflect data supplied to the wrist device. For example, Nike Inc. and Apple Inc. have joined forces to provide what is referred to as the Nike iPod Sport Kit that is a wireless device kit that allows communication between a pair of specially configured Nike+ shoes and an iPod nano. The Nike iPod Sport Kit is arranged such that at least one of the Nike+. shoes includes a sensor (that includes an accelerometer/transmitter) mounted under the inner sole and a receiver that communicates with the iPod nano. In order to accommodate the sensor and provide appropriate data to the iPod nano, the shoe must be a Nike+ model with a special pocket in which to place the sensor. However, some people have taken it upon themselves to remove the sensor from the special pocket of the Nike+ shoe and place it at inappropriate locations (shoelaces, for example) or place it on non-Nike+ model shoes.

Seems that some people just do what they please with products they purchased and Apple wants to put a stop to the unsavory practice.

All of this is just a ratcheting up the intensity of the assault on the Doctrine of First Sale, a fundamental principle that says once someone buys a product from a manufacturer, they can do with the product as they want.  This is the very basis of the concept of ownership.  Software companies have long attempted to bypass the Doctrine of First Sale with EULA that say words like "license" suggesting rental even though they take all the money upfront like a purchase, but the assault has been limited to intangible goods, until now.

So, after Steve & Co locks down control of every Apple product, what’s next?

It would seem that all that would be left are Apple users.  Apple has long used EULA as a way to tie software and hardware sales of their computers, iTunes has long limited consumer choice to other options, they have taken significant strides to control and bend iPhone users to their will, and now with Nike+, iPod users as well.  So why not take this to its logical conclusion and tie Apple users completely to their products?

Get a patent on some DRM for Apple owners, include an EULA with every product that limits Apple product owners to only owning other Apple products, negotiate a contract with an RFID manufacturer to tie all Apple product sales to implantation of chips in customers, put in some secret software coding that downloads user whereabouts to Apple’s servers, and include a kill switch in the DRM to shut down any users who try to violate the EULA.

Is this extrapolation ridiculous?  Yes.

Nevertheless, is it not on the trajectory that Apple is headed?  Perhaps... in an illustrative way.

There are some consumers that may not care and perhaps some that even enjoy the level of control Steve & Co attempt to exert over all aspects of their lives where an Apple brand device is involved, but as far as I am concerned, if I give a company my money in exchange for goods or services, I certainly do not want them meddling with what I can and cannot do with my purchase.

Funny when the talk of “Trusted Computing Initiative” was started years ago. Everyone was so up in arms and worried that Microsoft is going to be telling people what they can and can't do with their computer.

Apple computer are built using the Trusted Computing Initiative hardware. Only Apple approved and “trusted” hardware and software can be used…

But none of the Apple fanboy's see anything wrong with that…

There are pros and cons to these types of controls but that's the beauty of a free competitive market; you pay your money and take your choice.

At least now there's a choice, a pretty limited one admittedly compared to the 80's when there were more types of home computer than you could shake a stick at. Still, it's better than it would be if there were only one choice - and really, please no one try to tell that there's any real difference between Dell, HP, etc, etc, etc.
10010011 posts on September 22, 2008 11:04
Hardware lockouts is why I will never own a Apple product.

Funny when the talk of “Trusted Computing Initiative” was started years ago. Everyone was so up in arms and worried that Microsoft is going to be telling people what they can and can't do with their computer.

Apple computer are built using the Trusted Computing Initiative hardware. Only Apple approved and “trusted” hardware and software can be used…

But none of the Apple fanboy's see anything wrong with that…
AdrianMills posts on September 21, 2008 07:18

I do hope that Jobs dies and apple falls to bits.

The fact is that Jobs is an innovative genius and the consumer electronics industry owes a lot his vision.

That Apple try get as much money off of their customers as possible and try to control their product, well, that's their prerogative according to that pesky American market freedom, capitalist whatchamathingy.

As for his death. Well, the reason why Apple's shares dropped drastically when it was announced that he had pancreatic cancer is because it's always fatal. When I read about it a few years ago, the longest anyone had lived after diagnosis was 5 years. My mother died from it and it was a horrible way to go.

I for one will be sad when the world loses a mind like his.

Clint DeBoer, post: 459244
My next laptop will probably be a Mac product… sigh.

Why the sigh, Clint? Don't worry about it at all. I'm quite happy with my MacBook, and both of my brothers use the pro versions for work and love them. They are nicely designed, and they'll even run windows (XP for ya, as it seems you aren't a fan of Vista). I got my parents an Air, and that thing is slick. The Air has a specific target audience, but what it was supposed to do, it does well. I thought it was all hype until a used it - quite nice.

I use Windows all of the time, and I have no issues with it. I have yet to meet a PC laptop that can touch the design of a Mac, though. Doesn't mean that they aren't out there! Just that I haven't seen one. At least that I can remember. I'm usually pretty tired…
Clint DeBoer posts on September 20, 2008 19:48
My next laptop will probably be a Mac product… sigh.
Post Reply