Anything But HDMI Please 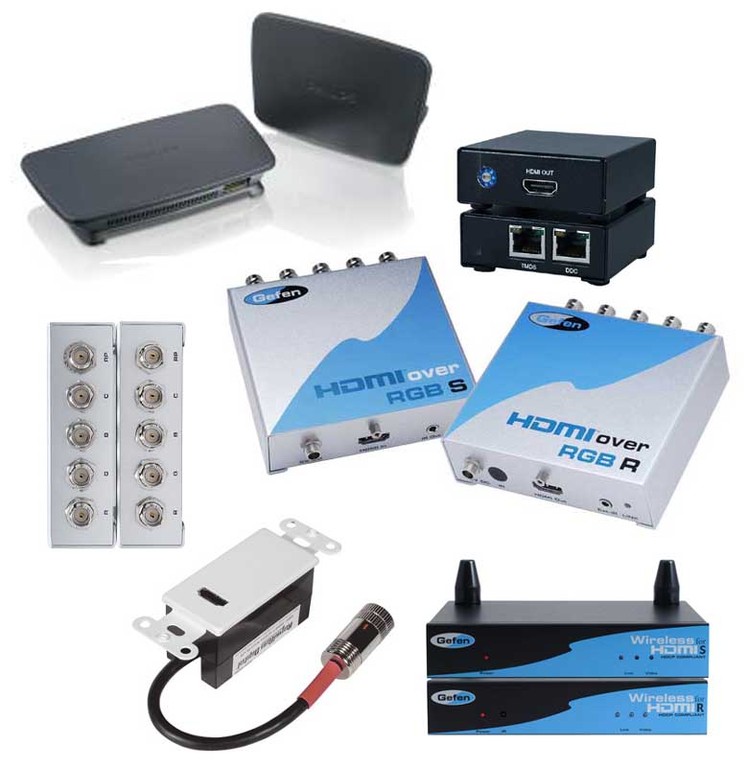 PLEASE! Anything but HDMI!

First of all, don't get us wrong about our views on HDMI. It's a great concept. A single digital cable connecting audio and video from one component to another. It's just that it's been a bit of a roller coaster for custom installers and consumers alike. In fact, a very large percentage of custom installers - you know, the guys doing million dollar plus installs - won't touch HDMI with a 10-foot snake. Why? Because it sucks for a myriad of reasons:

So, what's going on now? Well, HDMI 1.3 has finally allowed integrated cable EQ to help source devices and sinks (displays) to better deal with the insertion loss generated by longer HDMI cable runs ("longer" = anything over 4 meters for the most part.) Unfortunately, this doesn't do much to alleviate all the other negatives associated with HDMI. As a result, we are now noticing a huge push in the marketplace to replace HDMI.

Anything. Anything but HDMI.

Cases in point: Everyone is coming up with ways to transmit, send or otherwise distribute HDMI... without actually using HDMI. Here are just some of the products we're seeing all over the place:

So there you have it. HDMI is pretty much stirring up innovation simply by being so poorly designed. It's not brain surgery, yet the powers-that-be let this failure-of-a-connection-method come to market with all of its faults. It's not that we don't appreciate the technology or all that is involved, but we've never seen an industry so bent on finding alternatives to such a miserable, yet mandatory, format.

Here's to hoping the future continues to look bright... and perhaps even wireless!

I've been reading a lot of posts complaining (rightfully so) about HDMI, and one of the big ones is the connector coming loose all the time.

My company, bleeeep, has been working on a product for quite some time now, that we have a patent pending on, which is a universal HDMI locking system called hd EZ lock(TM). The main adaptor clamps over the cable, and “clicks” over a locking arm that either screws into the fixing screw on the input, or adheres to the chassis if there is no fixing screw.

It works with most cables and components. It works with various size cable diameters, various fixing screw locations, and various depths of cable heads.

It would be great to know your thoughts on our product. We will have them available in August 2008, under $20.00 for two adaptors.

If you're interested in knowing more, you can enter your email address at bleeeeeep.com and we'll keep you updated.

jotham, post: 422099
Can anyone explain why DisplayPort is trying to get involved in this snafu DVI-A, DVI-D, HD-15, HDMI is bad enough, I don't want more!

They already tweaked DVI. They added audio to it and gave us HDMI. DVI with its lack of ability to do long cable runs passed that “feature” to HDMI.

obscbyclouds, post: 422127
While it may stink and make us all angry, many of us don't even have a choice. Another instance of DRM gone mad.

If you have more than one uncompressed audio source, you're all but out of luck if you don't use HDMI. Not many recievers have more than one analog multi-channel input. Even if they did, who the heck wants to run 18+ RCA cables just for audio????

Try getting a PS3 (or many other BR players for that matter) to play a DTS-HD MA track without HDMI.

While I do see your point, my 8 year old Denon receiver sports both 8 ch. + 6 ch. external inputs; one of which is currently used with impressive results to transmit SACD & DVD-Audio from a player with very decent D/A converters.

And I am _glad_ I am not forced to replace that component just to enjoy high-def audio formats… (I'll gladly run eight more RCAs from a future BD that decodes DTS-HD Master Audio internally.)
e-paladin posts on June 11, 2008 14:19
I think the frustration here (and what we mostly all agree upon) is that we need an industry standard that will stick.

While I'm sure that those who have adopted HDMI have carefully figured out it's compatibility with thier respective systems and it works fine. The danger in a constantly changing standard is what happens when you decide to change (upgrade) a component or try to integrate a newer technology into it?

There is no doubt the benefits of digital technology in current and future HT setups but constantly patching a flawed delivery system (HDMI 1.0,1.1 …) is just an indication of a system doomed to eventual failure and obsolecence.

What needs to be looked at is what a resonable bandwith requirement for home theater data (audio, video, …whatever)is and what is the cheapest most flexible and robust way to implement it.

Oh, and I'm sick of people in the industry trying to profit from the creation of this type of standard, its like people trying to take credit and profit for the design of the 2 (or 3) prong power plug.

(I'm of the opinion that coax might be the way to go unless some type of more flexible fiber optic way could be invented)
Midcow2 posts on June 11, 2008 13:55
Glad Blue Jeans Cables is on the "best' end

KurtBJC, post: 422078
…. If you're not the best or the cheapest, it's hard to sell cable unless you have some other advantage (e.g., retail placement in big-box stores). Without these things–which most of our old competitors did not mirror–we would be losing our grip fast, but as it is, business is still healthy and growing.

Hey Kurt, I for one am glad that Blue Jeans Cables is on the “best” end of the sales rather than the “cheapest”. And also glad your business is healty and growing!
Post Reply