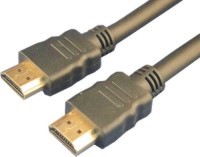 Starting around 2003 we saw a rapid adoption of the Digital Visual Interface (DVI) across the digital consumer market. This included DTVs, high definition set -top boxes and computer graphics boards. By the end of that year, well over 500 consumer electronics products featured a DVI connection, with approximately 80% of DTVs shipped to the US using that technology. Later in the year, HDMI also emerged as a digital transmission format, but addressed some specific needs tailored to the consumer electronics market:

The HDMI Working Group was announced in April of 2002 and included Hitachi, Panasonic, Silicon Image, Sony, Thomson, and Toshiba. The group's charter was to define the next-generation digital interface specification for consumer electronics products.

HDMI 1.1 was a relatively minor update. The primary feature was to add some packets of audio-related content protection information. These packets were required by DVD-Audio in order to permit DVD-Audio content transmission on HDMI. HDMI 1.0 had the audio and video bandwidth and capabilities and HDCP already had the content protection capabilities, but there was some data that the DVD-Audio folks wanted to send to HDMI/HDCP sinks to tell them not to send the DVD-Audio content elsewhere.

As for HDMI 1.2, several companies have requested enhancements to the HDMI spec that are being considered by the HDMI Founders, but these items are, by agreement, not permitted to be discussed publicly until the specification is released. The HDMI Founders designed the HDMI specification to be dynamic. As such, HDMI has plenty of extra bandwidth to accommodate future audio and video requirements, and the Founders are committed to evaluating and updating the specification to accommodate new audio and video formats that may be introduced in the foreseeable future.

A single HDMI link, on the other hand, is capable of transferring up to 24 bits of user data at 165 Mpixels per second, resulting in a massive bandwidth of nearly 4 Gbps . This is enough to support the 1080p resolutions of today's newest high-definition displays while still leaving room to transport up to 8 channels of high-resolution audio with 24 bits of resolution and a sampling frequency up to 192 kHz - all across a single HDMI cable. This is well beyond the maximum specifications of even DVD-Audio, which tops out at 6 channels and a sample rate of 96 kHz. The fact is, the HDMI standard includes extra headroom to allow for future upgrades to audio formats.

Like DVI, the HDMI specification is based on TDMS encoding and signaling technology. A TDMS link consists of a single clock channel and three data channels. Eight (8) bits of video data are converted into a 10-bit transition-minimized, DC balanced sequence through the use of an advanced data-encoding algorithm implemented on each of the three data channels. This allows for a very strong transmission, while also minimizing the potential for E M I (electro-magnetic interference) over copper cables. Because of the use of the advanced encoding algorithm, data recovery on the receiving end is very reliable, enabling transmission over fairly long cable runs.

With the exception of the connector itself and the optional control signal, the HDMI physical layer is the same as that for DVI. Compliant DVI sources and displays will be interoperable with HDMI devices through the use of a simple, passive DVI-to-HDMI converter cable or converter. This protects consumers' investment in DVI-enabled CE products.

With a single-link clock frequency of 165 MHz, all existing HDTV video formats can be readily supported, and there is more than sufficient bandwidth to support future video formats such as 1080p at 60Hz (making HDMI ready for the next-generation video formats that have finally started to emerge in 2005). As with DVI, an optional but rarely used second link can be used to double the bandwidth to support any resolutions above UXGA (162 MHz). This second link is only expected to be used in high-resolution PC applications and utilizes a different size connector (we'll expand on this later).

HDMI pixel encoding includes support for RGB 4:4:4 as well as digital TV's YCbCr 4:4:4 amd YCbCr 4:2:2 color spaces. The two 4:4:4 encoding formats are both 8-bit per component sampling for 24-bit per pixel delivery. The 4:2:2 encoding format uses up to 12-bits per component for greater color depth.

HDMI can support all existing and planned PC or TV video formats. Several formats were specifically established in order to jump-start compatibility between products and media whose resolutions were different:

According to your HDMI Connections Beginners Guide,

“HDMI pixel encoding includes support for RGB 4:4:4 as well as digital TV's YCbCr 4:4:4 amd YCbCr 4:2:2 color spaces. The two 4:4:4 encoding formats are both 8-bit per component sampling for 24-bit per pixel delivery. The 4:2:2 encoding format uses up to 12-bits per component for greater color depth.”

If I go with your article, YCbCr 4:2:2 sounds superior,
but the Wikipedia article suggests YCbCr 4:2:2 trims color info for the sake of greater luminescence info, and that yCbCr 4:4:4 doesn't do this.

Any clarification you could provide would be great.

I just spent an hour or more on-line with Sony this morning because our new HDTV, after operating flawlessly for a couple weeks, suddenly yesterday started displaying a clipped HD picture. Specifically, the right and left portions of the picture weren't there. All else was still fine, but clearly some of the basic information from the original picture, that which comprised the right and left bars, was simply gone.

We concluded that the problem is most likely in the cable box, either not decoding or not transmitting that portion of the picture … my question to Sony, which they couldn't answer, is whether the center of a HiDef picture is encoded, compressed, etc., separately from the two side portions. Indeed, from what I have read here and elsewhere, it does appear entirely possible that there is a 4:3 aspect ratio component for the center, and that is supplemented, in full HD, for the full 16:9 picture. So it is possible that those two sections could have gone missing in the cable box. Or IS IT? That's my question…

(I'll add that the section of the picture that does appear is undistorted (no stretching, no compressing (whatever the opposite of stretching would be called), supporting the hypothesis that we're just missing right and left. And I'll also add that the screen works across its face; a DVD played with 16:9 aspect ratio source program will display normally … again, that seems to support the notion that there's something about the signal coming from the cable box.

I'm just curious on the technology, whether indeed the various sections of the 16:9 full HD picture are “packaged separately” in such a manner that a part of the picture could fail and manifest itself in the manner described.
Haoleb posts on April 24, 2007 14:05
Thanks for the replies, Its great when you know your right about something. And you actually are! My boss is trying to get us to use HDMI more often so we dont have to make cables, But unless we're just installing a tv and dvd player and thats it, It really doesnt work in our systems. Personally, im not very fond of the format because i didnt have great luck with it in the past. Unfortunatly though it seems like this is where the HD market is heading so we'll see what really ends up happening!
AVRat posts on April 24, 2007 11:09

Haoleb, post: 264870
Hopefully someone can defintively answer this question. can I input HDMI into a reciever and output through component?

My boss seems to think you can, easily. However im not so sure. first of all it defeats the purpose of HDCP, secondly I have seen nowhere in the manual for the denon recievers we install at work that says you can do this. Their video flowchart shows HDMI in ONLY to HDMI out.

So far it looks like the upcoming Sherwood Newcastle R-972/872 are the only ones that will be able to do the transcoding (down-conversion). http://www.audioholics.com/news/trade-show-coverage/2007-consumer-electronics-show-ces/sherwood-newcastle-r-972-hdmi-1-3-receiver
mouettus posts on April 24, 2007 10:56

pjviitas, post: 217525
HDMI is a good send for folks who connect computers to their A/V systems

Yeah but still… you're not getting the computer's audio out.

I hope they'll come up with a multimedia card (audio and video) for PCs so we can output both signals to the receiver and then receive the hi-def signal and TRUE HD via HDMI from the computer.
Post Reply