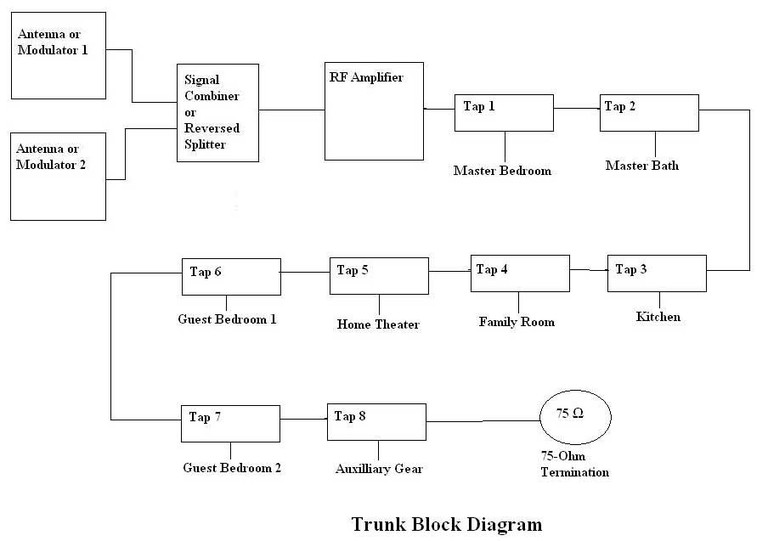 Special thanks to Impact Acoustics

Television is the first truly democratic culture - the first culture available to everybody and entirely governed by what the people want. - Clive Barnes

CATV, MATV and other RF Tricks

Welcome to the fourth installment of our continuing exploration of signal distribution for the residential installation. In part one of Whole House Wiring Basics we explored various aspects of multi-room and/or multi-zone media design and implementation. Part two expanded our examination to include quality transport of analog video signals such as component, s-video and composite from point-to-point. Part three explored the distribution of digital video signals; HDMI and DVI-D for those just entering this hobby. There is a lot more to cover and today we’ll examine one of the oldest of the distribution disciplines – and one that can give you the most trouble. Even though antenna distribution (aka RF, MATV or CATV distribution) has a long and well-documented history, there are aspects of good RF system implementation that border on a dark art. Many are the antenna systems that look good in principle but end up delivering snowy, compromised performance on all – or just one or two – of the ports on the network.

RF stands for “radio frequency” and describes the signals we’ll try to shuttle from one room to another without compromise. The moniker MATV is an acronym for Master Antenna Television and is used to describe an RF distribution scheme that sends signals from a single antenna to multiple locations, usually within the same edifice. CATV, as may now be guessed, is Community Antenna Television (sometimes erroneously called “cable antenna television”) and dispenses with the large Yagi multi-element antenna on the roof in favor of a single coax pre-loaded with all your favorite channels by the friendly local cable service provider.

The contemporary RF system is far more complex than anything that was needed years ago. Once upon a time we needed to concern ourselves with notch filtering adjacent channels at the head-end, balancing signal strength, and delivering a spectrum that ranged from 55MHz to 800MHz without undue roll-off or, especially, RFI or EMI. This, by itself, is not without challenges. But today we have a more robust puzzle. A contemporary RF distribution schema must provide all that bandwidth and more. It must include provisions for bi-directional communication to accommodate Internet connectivity. It has to be amenable to both linearly polarized signals (standard RF broadcast) and circular polarization (satellite broadcast and new digital OTA signals). Finally the fully functional MATV installation needs to be able to handle satellite RF frequencies (950 to 2050MHz), low frequency control signals, and even DC power! Sometimes its hard to believe that one run of coaxial cable can do all of that, but indeed it can. To have a complete home media system your plans must include a proper RF distribution set-up.

This article won’t discuss antenna design. That is a topic best covered on its own. For those who want to know which antenna will best serve their particular circumstances, I refer you to the AARL Antenna Handbook – one of the best resources for the do-it-yourself enthusiast. This paper will assume that you have a quality RF source at your doorstep (a large assumption in the face of typical cable installation practices) and will examine the steps, considerations and pitfalls of distributing it to various rooms without signal loss. This paper will touch only lightly on local modulation; once again that is a topic worthy of its own dissertation. Finally this paper will not consider AM radio reception, which is a discipline in itself. An FM/TV antenna is as different from an AM radio antenna as a satellite dish is from a DVD player!

When creating an MATV system, and before getting into the specifics of the installation, you must decide on the type of distribution you want. There are two possible lay-outs. To add spice to the RF stew, it’s also possible to combine the two to make a hybridized distribution system. You must choose between a “home run” layout where the coaxial cable from each antenna locations runs directly to a single distribution point in the equipment closet, or a “trunk” layout where each antenna drop is tapped into a master trunk. Each system has its own merits and deficiencies.

A home-run system is exactly what it sounds like. Each coaxial cable runs directly from the antenna port in the remote location home to the master distribution location where it is connected to a multi-port distribution block. This configuration is sometimes known as a “star topology.” The advantage of this layout is an easy opportunity to control interference from port-to-port, easy solutions for ground-loop interference, and ease of balancing delivered signal power. Additionally a home-run system simplifies equipment selection as field measurements are predictable and system performance often mimics theoretical expectations to a great degree. The disadvantage is that you’ll end up running a lot of coaxial cable and you’ll have to deal with a large bundle of cables at the demarcation location.

A trunk-based system uses a single master “trunk” line to distribute the signal. Each drop is then set off a tap. The number of taps must be carefully analyzed to provide balanced signal levels at each drop location and the entire system must be properly terminated to maintain 75-ohm characteristic impedance. A trunk system’s greatest advantage is the ability to cover lots of space with a minimal amount of wire. A single line can be run several hundred feet and feed dozens of drops. The disadvantage is that every device connected to the trunk can affect every other device, so careful planning and equipment choice is critical.