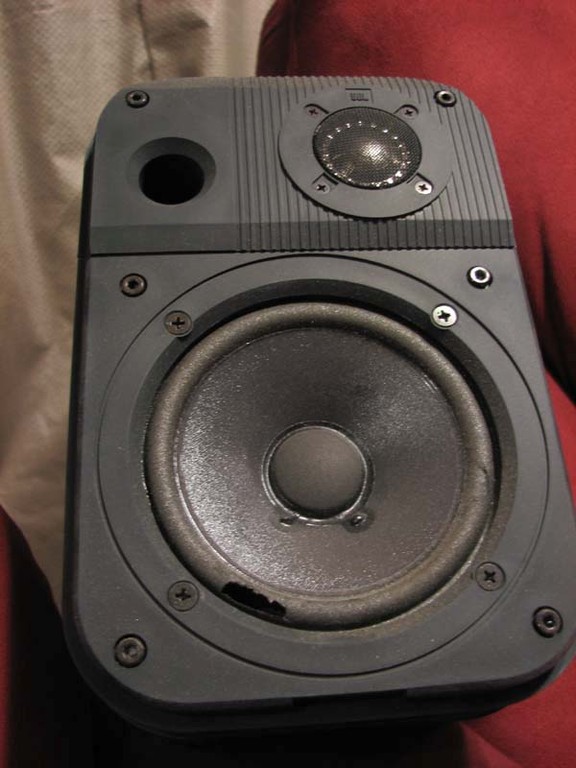 There is an old axiom I love to live by, “if it ain’t broke, don’t fix it”. Just because your speakers are old, doesn’t mean they can’t still perform as good and sometimes better than the models that replace them from the very same company. Such was the case with a pair of JBL Pro III professional monitors I’ve had since my post-college days when I was a budding audiophile but not yet an Audioholic. These speakers are small and unobtrusive but they put out quite impressive sound for their size. They are also very efficient designs meaning they play “LOUD” with little applied amplifier power. Their cabinets are covered in rubber material and they have metal grills. The Pro IIIs are a front ported enclosure with a 5 ¼” treated paper woofer with foam surrounds and a 1” titanium dome tweeter. Although the speakers in all of my reference systems are superior in terms of bandwidth and overall sound quality, these little gems work great for portable audio applications when I travel. When I am not traveling with sound, I use them as my primary speakers for my desktop computer where I stream music from Pandora.com and Rhapsody.com while I write my articles for Audioholics.com.

Recently I’ve noticed they were simply not sounding as good as I remembered. The bass was weak and I heard a lot of buzzing emanating from the woofers. When I popped the grills off it was obvious what was going on. Dry rot. Before butyl rubber took over as the primary choice of woofer surrounds, most companies utilized foam. Foam is actually more efficient than butyl rubber but there are no free lunches. The problem with foam, especially in humid climates like Florida, is that they deteriorate over time. Considering I had these speakers for over a decade, it only makes sense that the inevitable would happen to my cherished little JBLs.

At this point I had two options: I initially started down the path of the first option, searching JBL’s own website for a replacement to these speakers. What I found instead was a watered down version (Control 1 Pro) that appeared very similar but utilized a cheap ¾” mylar dome tweeter. I didn’t care for this option so I went to eBay and searched out the used market. I found a few pairs of Pro IIIs just like mine but noticed upon closer inspection some of the woofers had the dry rot problem as well. Basically even if I bought a good used one from a consumer, how long would it be until the woofers dry rotted on me again?

It was at this moment that I decided to pursue my second option. I did a Google search on refoaming kits and came across a company known as Simply Speakers. Not only did they offer refoaming kits but they also offered the option of mailing in your speakers to have their professional staff do it for you. Since I don’t have the steadiest hands (hence why I am an engineer and not a surgeon), I opted for having them restore my speakers for me. Instead of simply sending in the woofers, they insisted I send in both speakers fully assembled so they could inspect the crossovers and tweeters. As I was getting ready to ship them out, I realized their location was about a 1 hour drive from me so I opted to hand deliver them and meet the folks behind Simply Speakers.

What I didn’t realize until I stepped into their place was that I had dealt with them before. Back when I was in college I worked for a hifi shop called Cooper 4 Stereo where I assembled systems for clients, repaired electronics and installed gear in people’s homes. I used to frequent Simply Speakers to get vintage McIntosh woofers refoamed. They changed locations so I didn’t realize it was the same company. Simply Speaker Storefront with fully restored vintage speakers from JBL, Cerwin Vega, Infinity and many others

I always admired the work they did, as did their customers whom in a way felt like their precious speakers were re-birthed after they were fully restored by Simply Speakers. Some people have an affinity for vintage speakers and electronics just like they do for cars. I totally understand that as I still have a place in my heart for old JBL speakers. After all the JBL LX-44s were considered my first truly high end speaker system that I owned and spent a summer working at Publix supermarkets when I was in high school to afford them. Why ditch something you're so fond of just because it needs a little tender loving care?

With that I handed off my Pro IIIs to the staff at Simply Speakers where I could instantly tell they were very serious about taking good care of them and restoring them to their original working condition. I got a good warm fuzzy from them and was excited to see and hear the end results.

I had a few special requests of them that went beyond simple refoaming.

Editorial Note on Foam Surrounds:
Simply Speakers utilizes a poly-ether based foam rubber material for their refoaming kits. This has a much longer life expectancy than the original foam used by the manufacturer which was a polyester based material. Simply Speakers also warranties their refoaming on home audio for 7 years and automotive for 1 year.

They had no problems with my request and asked to give them a couple of weeks to get these speakers fully restored. I left the JBL’s with them and proceeded to enjoy the 4th of July weekend with my family at the wonderful beaches in Clearwater, Florida. When I got back from my mini vacation, I received an email confirmation from Simply Speakers acknowledging the work being done and the return shipping address they would mail my speakers back to once the work was completed.

During the restoration phase, I asked them to send me some before and after pictures to monitor their progress along the way. This is not something they normally do for customers but I wanted to concisely document the process and show our readers what these guys were all about. About two weeks later I received an email (with photos upon my request) that the work was completed and that my speakers would be shipped back to me. I received my speakers the next day! Old Thread - Old Speakers, All Vintage and as always- All Good

I too regret parting out/ tossing out older vintage speakers in my early HT days but I had no Idea :o.
Pyrrho posts on November 08, 2011 13:47

mattsk8, post: 840069
I've never had good luck w/ rebuilt woofers. It always seems like they loose bass responce after they're rebuilt. I've had 3 pair done. Some MA Pro 8“ woofers (just had the foam surround replaced), some Cerwin Vega 8” woofers (blew one and had it rebuilt), and some Kickers. To me they never sounded as good after they were rebuilt. Could this just be a poor job or wrong material? I kinda gave up on speaker repair but maybe I just need a better shop??

I have had excellent luck with repairs; I have used Millersound.

If the wrong materials are used (e.g., improper size of surround, etc.), or if they do it wrong, then it could adversely affect the performance of a speaker. Done right, it restores them to like new performance.
mattsk8 posts on November 07, 2011 15:34
I've never had good luck w/ rebuilt woofers. It always seems like they loose bass responce after they're rebuilt. I've had 3 pair done. Some MA Pro 8“ woofers (just had the foam surround replaced), some Cerwin Vega 8” woofers (blew one and had it rebuilt), and some Kickers. To me they never sounded as good after they were rebuilt. Could this just be a poor job or wrong material? I kinda gave up on speaker repair but maybe I just need a better shop??

This is a 2 year old thread BTW !
tintasbarnes posts on November 07, 2011 05:56
Great article! I also have some of these sweet boxes. Sadly one of my speakers has his paper pretty much worn out.

Question: where can I buy some swap speakers?

On ebay I didn't find any. I was searching after similarities and I've found this:

Do you think it will do it?