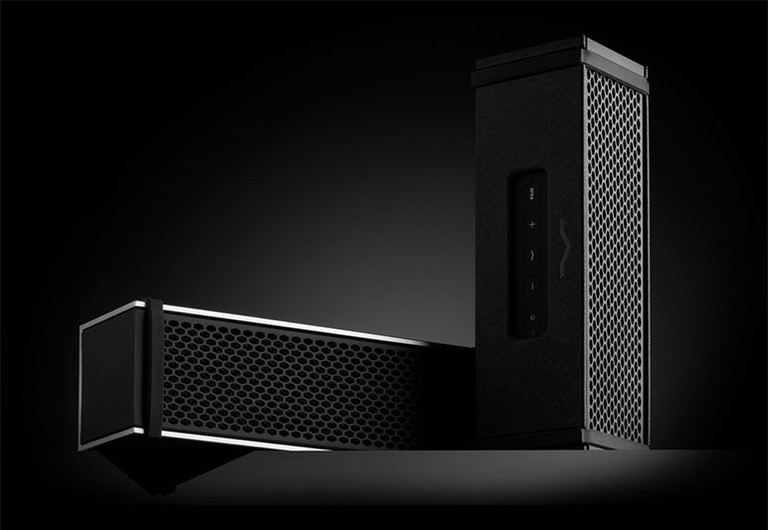 Over the past ten years, V-MODA has made a name for itself in headphones and portable audio devices that look as good as they sound. The Hollywood, California-based company has design centers in Milan and Venice, Italy that have a knack for bringing function to slick design. The company’s founder and CEO, Val Kolton is known to listen to online communities for headphone enthusiasts and apply what he learns to new products that are often built to fill an underserved niche. Take the V-MODA REMIX, for example, it’s not only the company’s first portable Bluetooth speaker, it’s possibly the first-ever Bluetooth speaker that doubles as a headphone amplifier. The Bluetooth speaker/headphone amp is an interesting combo that few would have ever even considered a need for in a single device. In a recent interview, Val discussed being on the road much of the year, and the need to travel light while staying at hotels. Two devices that any traveling audio lover is liable to pack might be a Bluetooth speaker and a headphone amp. With REMIX, the two becomes one.

The REMIX is a small rectangular box available in your choice of black or silver, black being a faux-leather finish while silver is a flat gunmetal aluminum, that’s the model we’ll focus on here. The metallic encased speaker with a black grille on front and back exudes rugged quality. Heft the 1.9lb speaker in one hand and it feels like a serious piece of electronics - it’s dense, weighty and there is certainly no hollow plastic to be found. It’s not just portable, it’s lean, heavier than it looks, and it feels like every square millimeter of space it occupies serves a purpose. It’s a good thing the first-impressions are good because it’s not a bargain-priced device. These days you can get a serviceable Bluetooth speaker for under $100. At an MSRP of $300, V-MODA wants to raise the bar on budget Bluetooth speakers with REMIX. It’s a worthy ambition if it can function as good as it looks and feels. True to the V-MODA tradition, parts from the speaker can be disassembled and replaced with 3D printed parts that featuring your own custom designs. There are an array of add-ons you can have made-to-order directly from V-MODA to accent your Remix. But the speaker looks great on its own. 3D printed pieces would almost certainly detract from the subtle ruggedness that makes the REMIX such a beautiful little speaker.Included with REMIX is a USB Type-C to Type-A charging cable with no wall outlet. You’ll have to connect to an active USB port to charge. While it’s nice to see the REMIX taking an early look into the future by using Type-C, it would've been nice to have included a USB wall outlet so you could at least charge the REMIX with no external hardware required. You’ll also find a braided 3.5 mm cable that plugs nicely into the speaker’s input from your music source (such as a cell phone) while your headphones plug into the 3.5mm VAMP output (short for V-MODA Amp) on the back of the speaker. The input and VAMP output can also be used to daisy chain multiple REMIX speakers together for one, larger sounding audio experience.

Rubberized black buttons run along the center-top of REMIX clearly marked by high-contrast white icons for power, pairing, volume up/down and a special function button. One-press of the power button will turn REMIX on with a bright tone. Pairing is a snap. Once paired, REMIX will automatically connect to your previously paired device, giving off a brief but shrill tone. The multi-function button features the V-MODA logo variant or the “V-swoosh” and can be used for the typical variety of Bluetooth functions. The multi-function button is also used to switch from speaker mode to headphone amp mode when your headphone cable is attached.

Two of the most important questions of any portable Bluetooth speaker is battery life and Bluetooth range. After testing both functions the V-MODA advertised specs were pretty close to my results. V-MODA says the battery can get 10+ hours of life. I ran it for just over 8-hours at about three-quarter volume which was good and LOUD for my listening taste. No doubt 10+ hours can be achieved if you pulled back on the volume. The Bluetooth range between REMIX and my Galaxy S6 phone was easily 30-feet. V-MODA says 33 feet which is consistent with my results while indoors in a large continuous straight room with no walls coming between phone and REMIX. As far as extra features are concerned, the number of people chomping at the bit to get their hands on a Bluetooth speaker with a built-in headphone amp is probably minimal. The number of people who are likely to order 3D printed parts to decorate their REMIX Bluetooth speaker is probably fewer still. But I give big ups to V-MODA for trying new things, even if they might be a little, shall I say… gimmicky?The REMIX headphone amplifier provides a respectable 83mW x 2 of power to your favorite cans. But, the idea of a headphone amp attached to a Bluetooth speaker is so close to being a great idea but not quite there. Unfortunately, the built-in headphone amp is only an amp with no built in DAC, that could have really made the difference. An upgraded DAC from the standard fare found in most cell phones would have really made this a dual purpose unit for anyone who actually uses an external DAC/amp for their headphones. But any headphone hi-fi fan that is serious enough to use an external amp is likely to hit the road with an OPPO HA2, FIIO E18 or some other portable DAC/Amp for headphone duty - whether they use the REMIX or not.But none of these extras should detract from the core functionality of the unit, a $300 Bluetooth speaker has a lot of pressure to perform.

When you put the solidly built metallic body on a smooth surface it lands with a rubberized thud on thick elastic feet that serve a dual purpose as retaining rings holding the exterior in place. Turn it on, play back music and the REMIX seems more like a tightly coiled spring ready to hurl sound with surprising gusto. We’ve all read speaker reviews that say things like - surprisingly big sound from such a small package and while it may sound trite and cliche… REMIX gives you surprisingly big sound from such a small package.Let’s put this into perspective. REMIX consists of two 10W forward firing glass-fiber drivers tempered by a pair of passive radiators, one forward and one rear. In a compact design like this, the presence of passive radiators can smooth out the rough edges and round out boominess in lower mids. V-MODA calls them Passive Bass Reflectors and says: “Hear and feel the precise vibrant bass of your music, without bloated boom or muddy mids".

Indeed, from a Bluetooth speaker that meekly fits on a shelf, it can certainly blast the volume with very little distortion as you increase the volume to its limits. When testing loudness in a mid-sized room, my ears gave out before the speaker did. At moderate to higher volumes, the sound is surprisingly roomy offering great soundstage and detailed highs. REMIX handles mid-bass without boominess and doesn’t try to get out of hand with lower bass that it just can’t handle due to its size. Meanwhile, the speaker provides excellent detail in the upper-end giving it that impression of openness. The tonality is pleasant for such a small speaker, but the best compliment I can give the REMIX is the broad soundstage. After some experimentation in placement for the room you’re planning to use the REMIX in, you might be hard pressed to localize exactly where the sound is coming from if you had just walked into the room for the first time with the music playing at moderate volumes. But it pays to experiment. Try it away from a wall, completely open or slightly enclosed on a shelf and you’ll hear a variety of tonality and texture that could really help bring out the details you like in your choice of music.
Let’s face it, REMIX is a little speaker so while it can fill the room with volume, obviously it cannot move the air of even a pair of bookshelf speakers. But, for its intended purpose as a portable speaker that fills that music-listening gap as you travel, it is definitely worth the $300 asking price over a budget Bluetooth speaker. Life is just too short for the terrible sound of under-powered speakers housed in hollow plastic that will reverberate and distort at high volumes. You’ll be glad you saved up and got the REMIX instead.

Read the Complete Thread
gene posts on August 17, 2017 01:36
V-MODA has brought some impressive headphones to market over the last several years and this is the company's very first try at a portable Bluetooth speaker. The speaker carries an unexpected feature of doubling as a portable headphone amplifier that might be a great fit for those who travel constantly. It's by no means a budget speaker but does it live up to V-MODA standards? Let's find out!