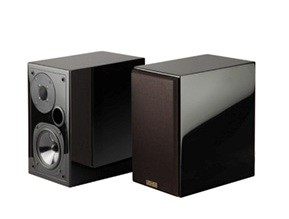 After spending some time with these speakers, I’m convinced that Usher Audio is looking to dispel the idea that you need to search the Internet for quality bookshelf speakers at a reasonable price. The build quality is without equal, the component quality rivals (and bests) speakers much more expensive, and the sound if phenomenal. As far as I’m concerned, these are THE budget bookshelf speakers to beat.
Next Page ⇨
Like This? Check out our other Bookshelf Speaker Reviews!

Read the Complete Thread
natasha posts on December 31, 2009 08:07
hi, new to the forum and i found this thread and thought i would add my 2 cents worth,
i have been running the s520 for almost 8 months now and they are still improving!!!
they take forever to run in just like Kef speakers , alot longer than most!
these are imo the best small speakers i have ever heard at the price , i would recomend not pushing them to endstop thwacking levels until they have about 500 or so hours at reasonable levels, they seem to go very bright in the first 100 hours then steadily come on song for 400 or so hours ,as stated by the uk importer, to quote them, ‘' you wont believe what these thing can do, they WILL just keep getting better’', the difference from new to now is nothing short of breathtaking, set up on all my old gear, sony taf amp, atacama se24 stands , panasonic dvd through cambridge dacmagic, BK sub, the s520s really do like a little space around them to prevent the upper bass lift becoming too prominent , also found they dont like symetrical placement in any of my rooms, when they are in the right place in my room and hooked up to this modest ‘'very budget ’'system the are simply engrossing, they constantly grab my attention with anything i play on them but never does the sound become harsh or pushy, more a constant sense of ‘'wow never heard that before’' and thats with music i have heard a hundred times before,they remind me of the short time i had with a pair of ls3/5a's , they make you want to play more music and i have never used the speakers built into my tv since i got the them, i am buying twice as much music than before i had them , they are not the be all and end all of anything but, they are for me the last small speakers i will ever own and for a second system or for someone on a tight budget that wants a small speaker that will stand up to upgrades aplenty elswhere in the system for decades to come,they are simply superb , the competition will sound better in the show room but will give a far more satisfying life over time, the Usher s520 will be a future classic but for heavens sake be patient the rewards are amazing, must try them in my main stereo only system.
ps , the imaging reaches beyond the bounderies of my listening room and image placement is tangeble and very ‘real’ in its presentation,, wonderful stuff
kaiser_soze posts on August 20, 2009 11:30
What would happen if the woofer didn't bottom out?

“My personal opinion here is to design a bookshelf speaker that won’t bottom out as easily, allowing it to be played at louder SPL levels, but ultimately producing less low end bass extension. The user can than bass manage the speakers and mate them with a good subwoofer or two to get the full range sound without stressing the system's woofers, thus preserving dynamic range and vocal clarity.”

Basically, it was turned up way high, and instead of exhibiting a steady increase in harmonic distortion, it continued to behave in a linear manner up until it bottomed out, and this is as bad thing?? Perhaps the reason why it is looked at this way, by the person having this complaint, is partly that they don't actually bother to take measurements of distortion and study how those measurements interact with other factors.

Many speakers do not bottom out no matter how high they are played, but you have to ask why this is so. If the force applied to the voice coil increases linearly, should not the displacement of the coil increase linearly as well? If it does not, then doesn't this imply non-linear distortion? In most speakers, one or both of two things will happen to prevent the coil from reaching the hard limit of its travel. In the ideal, the surround and the spider behave as ideal springs (and dampers), which means that there is a linear relationship between displacement and force. In reality, as they are stretched to their limits, the ratio of force to displacement increases, i.e., doubling the force no longer doubles the displacement. Additionally, and contrary to what I often read, overhung voice coils do not ever actually overhang the gap, because of all the stray flux. This is especially true when the magnet assembly is joined to a basket made of stamped ferromagnetic steel. The strength of the magnetic field experienced by the voice coil diminishes as it moves away from the midpoint of the gap, and as it does, the ratio of force to displacement changes. The electromagnetic force weakens as the coil displacement increases, the effect of which is equivalent to the opposing force (due to the surround and spider) increasing in a non-linear manner as the displacement increases.

These non-linear effects conspire. The net effect is that instead of the driver hitting a hard bottom, it hits a soft bottom, and it starts to do this long before the hard bottom would otherwise be felt. In practice, it is these distortion-inducing effects, and not the intentional application of high-pass filtering, that prevents most speakers from bottoming out. The reason they do not bottom out, in other words, is because they are designed in a way such that the distortion increases gradually from a moderate SPL and increases more rapidly than the SPL. It is analogous to “soft-clipping” circuits, which some people like. You can design an amplifier so that it will exhibit “soft clipping”, but the price paid is invariably that the level of non-linear distortion will increase dramatically and before the hard clipping level would otherwise be reached. It is a dumb idea, and a better idea is to put idiot lights on the front of the amp so that audiophiles who actually are deaf because they always play stuff too loud can tell when the amp is clipping. By analogy, it makes sense to think of the woofer bottoming as an idiot light of a similar sort. The alternative would be to alter the driver so that it is inherently inferior and so that instead of bottoming out, it exhibits distortion that a good many audiophiles are evidently incapable of hearing. A loudspeaker review that does not at least attempt to measure flatness of frequency response and non-linear distortion is about as useful as human excrement, and the reason, for the lack of meaningful insight into the reported behavior of this woofer, is due in no small measure to the fact that no meaningful testing of any sort was done with this speaker. All they actually did was open it up and take some pictures, and offer some purely subjective and inherently worthless opinions on the quality of its sound. Well, given that they are selling these speakers and that they represent themselves as providing a greater service (which they do), I suppose that's the least they could do for us.
droht posts on July 15, 2009 11:17

Nice! I totally missed that…now where can I put another pair of speakers…
Lordoftherings posts on July 12, 2009 08:52

The audioholics store has them for $400 with free shipping.
Post Reply