Into the Wild HD DVD Review 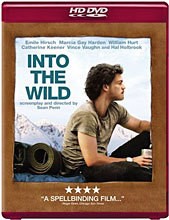 Into the Wild HD DVD

Into the Wild was first introduced to me in a book that made rounds one summer at my family’s cottage in Northern Ontario. The tragic story of Christopher McCandless, the young man who died surviving in Alaska was more than just a blip on the news radar. Author Jon Krakauer dug out the details of an idealistic and intelligent university graduate. The story may remind you vaguely of Catcher in the Rye as McCandless goes on a quest for his own search for truth and honesty.

“Rather than Love, than Money, than Fame, give me Truth.” – Henry David Thoreau

Sean Penn takes credit for both screenplay and directing Into the Wild, the Golden Globe winning film was almost ten years in the making.

The movie is a breakthrough in storytelling. Deftly switching from the young man’s final days in Alaska to flashbacks of his distant past. Whether we visit his sister’s insights into their childhood or see McCandless’s long journey through the American west prior to turning north to Alaska, we gain insights into this remarkable young man’s mind.

Although it’s a sad tale, this is no sullen bore of a film. Colorful characters adorn the story like imperfect gems. They’re real people, impressions of Americana that could have been penned by the likes of Mark Twain where he writing in the late 20th century.

Superb performances are turned in by some of the best actors in the business including Hal Holbrook who earned an academy award nomination, Vince Vaughn and Catherine Keener. The movie is also sprinkled with real people who aren’t actors. Sean Penn even got one man out of jail temporarily to lend vital authenticity to his scene.

It’s star, Emile Hirsch is made to look so much like the pictures of Chris McCandless from the book, it’s actually just a little eerie. Hirsch demonstrated dedication to the role by losing almost 40lbs for the movie’s final scenes.

Into the Wild along with Things We Lost in the Fire are to be the final HD DVD releases for Paramount. It’s a fitting farewell to the format.

The English Dolby Digital 5.1 Soundtrack is your only audio option. The soundtrack doesn’t contain a lot of opportunity for ear-numbing surround effects. But the Dolby Digital Plus 5.1 soundtrack makes up for it in musicality.

Original music was performed by Eddie Vedder, Kaki King and Michael Brook. Vedder is easily the most recognizable name. His rough baritone is thrown into many of the film’s road scenes. Like Easy Rider, Into the Wild provides shots of some of America’s most picturesque vistas while music rises to the occasion.

The most stunning effect you’ll find in the soundtrack are the instances where the front and surround speakers are dominated by the music. It’s difficult to say if the Dolby Digital Plus offers any more acuity than a standard Dolby Digital track on the DVD. But the music is highly detailed and draws you in by re-telling the story in its own way.

Not a perfect presentation of 1080P, you may see visible grain or noise at times in certain scenes. Indoor scenes are particularly dark with muddled details. But these are minor quibbles because it’s not an indoor movie.

An overwhelming majority of the movie takes place outdoors. The landscapes benefit from the high resolution detail in the many panoramic scenes. From the Colorado River to the Alaska’s snowcapped mountains you’ll see some of the best landscape scenery on film.

Menu system is easily navigable with only four main options. There aren’t a lot of special features in this film so it’s easy to keep the options into a well contained menu system.

I have seen it twice since I got my hands on the HD DVD. I will probably go through another viewing soon. It’s not a showcase for your home theater system so for most it’ll probably make a worthy rental. But, being of the last major HD DVD releases those who bought into the format may want to give the HD DVD a good look.

If you’re not sure you want to buy the DVD or HD DVD: Which should you pick?

I think HD DVD is worthwhile for this film despite some of the imperfections in the video quality. You’ll benefit from high resolution landscapes that 480P DVD cannot match.

The music quality in the soundtrack is impressive as this film could go down one of the great musical road films in the spirit of Easy Rider. But it’s difficult to say if Dolby Digital Plus on the HD DVD offers any noticeable advantage over legacy Dolby Digital offered on the DVD. But if you’re like me (and don't want to wait for an eventual Blu-ray release)  you’re looking for any advantage you can get.

Read the Complete Thread
BoobyBushy posts on September 16, 2010 06:24
The movie is well-done. The life it's about is not as well-done, but lets not confuse the two. You can't take a measure of someone else's emotional pain: they feel it so its real enough to them. Not the first and not the last to kill themselves trying to heal
xego posts on September 08, 2010 16:02
Yeah I am bummed. I rented this on BD from Netflix and it is the only BD so far that was damaged that I couldn't watch the movie. I liked what I saw of it. Have to re-add it to my que. By the way if you get a Netflix that doesn't work write on the sleeve with a sharpie so they get the message and don't put it back into circulation.
j_garcia posts on June 28, 2010 12:07
I picked this one up on BD some time back when it came out and have yet to throw it in the player, but I liked the movie a lot when I watched it on HD DVD.
sawzalot posts on June 28, 2010 10:05
This one is still in the original shrink wrap,along with countless others , just need more time.I have begun the quest to open and watch at least one movie per week but with just as many blu's un-opened I some times overlook the HD Collection :o.
Thanks for the heads up Alex I think I will set this movie on top of the player, that gets me half way there
T2T posts on June 28, 2010 06:46
Into the Wild was an excellent movie. Though I'm not a die-hard Pearl Jam fan, Eddie Vedder did a great job with the soundtrack.
Post Reply