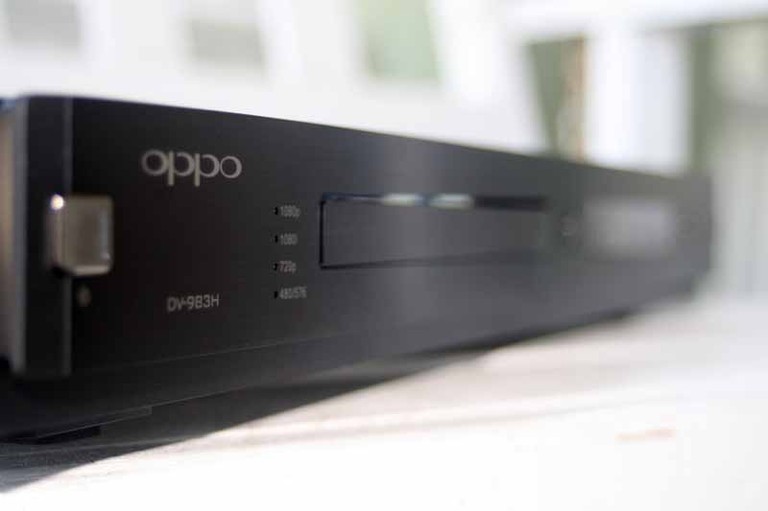 If this player had been released two years ago we'd say that Oppo has stolen the market. Though it faces stiff competition from Blu-ray, the DV-983H may be the greatest affordable universal DVD player to hit the market.
Next Page ⇨

Read the Complete Thread
beigecat posts on March 27, 2009 08:54
I've recently upgraded my projector to a Mitsubishi HC6500 (1080p). I have recently learned of an interesting problem. I have a DV-983h connected via HDMI cable (Blue Jeans BJC Series-1) through a Yamaha RX-Z11 receiver. Interesting thing to note is that if DV-983h upscales the video to 1080p with the Yamaha Z11 set to “pass through” the HDMI input signal, then no video signal, at all, is output from the Z11 and audio become “choppy”. If I bypss the RX-Z11 and connect 983h directly to the HC6500 with the 983h providing the video upscale to 1080p, then the projector correctly displays a 1080p image. If I set the 983h to output video at 480p and subsequently set the RX-Z11 to perform the video scaling to 1080p, then the projector displays a very nice 1080p image.

I believe this is an issue within the Oppo DV-983h. Communicating with Oppo about this I have learned they are already aware of this issue. Oppo claims they can neither test nor correct the problem as they do not have an RX-Z11 to test with. I have found several references to this problem on the internet in other websites. Some folks suspect it may be a compatibility issue since both the 983h and the Z11 use the same Anchor Bay video chip may be causing a conflict. I would suspect that the other Yamaha receivers using the same chip may exhibit the same problem.

To date Oppo has not responded with how they will approach correcting this issue for me, and other users with same problem. I had been plannig to acquire the Oppo BD-S83 Blu-ray when it became available, but with Oppo's poor response to correct the 983h issue fo me, I am rethinking my purchase of the BD-S83. I fear that since Oppo cannot identify nor correct this porblem in the 983h, then the same problem may carry over to the BD-S83 as it also uses the Anchor Bay chips. Interesting to note, I had offered to Oppo to participate in their BD-S83 Beta testing long before they “randomly selected” their Beta testers, but Oppo declined stating they already had enough testors. I find it curious that Oppo is reluctant to risk identification of a continued potential problem with a new Beta unit which they are preparing to distribute soon.

I really liked the Oppo DV-983h when I first installed it in Oct., 2008. That installation included a 720p projector. The displays had been impressive, especially considering the price range of the DVD player. Upscaling to 720p was not an issue regardless of the various combinations I tested. However, now that I can project a 1080p image, I am concerned that I may not be getting all of the video/sound “quality” available from the source material via HDMI. I currently have the DVD player set to output a 480p image and allow the Z11 to provide the upscaling. I have read that setting the DVD player to 480p may also inhibit sound production as this setting may limit the bandwidth available for audio through the HDMI connection.

I realize the DV-983h has now been discontinued, but I wanted to post my observation about this unit. It is a real disappointment to me. It appears the DV-983h was not the perfect unit everyone believed. Snce they have discontinued the player, my fear now is that this problem will never be addressed by Oppo. My concern is they may not correct any similar problem in the BD-S83 should it appear.

If anyone else has noted this problem and possibly devised a resolution please pass it along. I have tried all possible setting combinations on the various pieces of equipment to no avail.
Clint DeBoer posts on July 03, 2008 19:48
Keep in mind that it's also testing 60Hz 2:2 in NTSC. Oppo told me that they have issues with the HQV test but pass real-world and the DVDO tests for that cadence. No worries…
SiliconValley posts on July 03, 2008 09:44
Perfect PAL 2:2 playback

AcuDefTechGuy, post: 426881
I think the only 3 advantages of the Oppo over the PS3 include Region Free playback, DVD-A, and the looks of an audio component vs game console.

And you don't have to worry about buying a Blutooth to IR converter to use your usual universal remote with the Oppo. I think that is a pretty important advantage. Don't get me wrong, I finally crumbled and got a PS3, but it really bothers me that I have to buy a signal converter for me to use it as a DVD player without having to use the PS3 controller.
AcuDefTechGuy posts on June 25, 2008 11:05
The PS3 is something else, especially when you can get the 40G PS3 for $399 at BB.

I was only a little bit surprised that the PS3 got a HQV score of 100 vs the Oppo's HQV score of 105. I guess only the Realta and Reon chips can get a perfect HQV score of 130? I bet we can't tell the difference in picture quality, though. Man, so the PS3 can do TrueHD, DTS-HD MA, play BD, play PS3 games, play SACD, and can upscale SD DVD with a HQV score of 100, which is practically the same as the $400 Oppo.

I didn't read the entire view, but how does the Oppo get a Hi-Def Video performance at all when it's just a SD DVD player and not a BD/HD player?

I think the only 3 advantages of the Oppo over the PS3 include Region Free playback, DVD-A, and the looks of an audio component vs game console.

The advantages of the PS3 over the Oppo include Blu-ray (true HD PQ & SQ -TrueHD/DTS-MA), and PS3 games.

If I had 2 boys, instead of 2 daughters, I would definitely get the PS3!
Post Reply