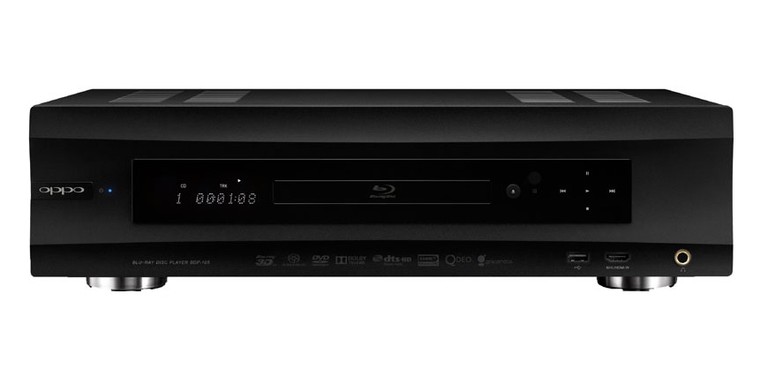 Oppo Digital has been producing

some of the best Universal Blu-ray players for some time now. The BDP-105 is their 3rd generation “audiophile” player.

We found the prior Oppo BDP-83-SE and BDP-95 players really did offer upscale performance in their analog outputs while still retaining the great video prowess of their less expensive offerings (the BDP-83 and BPD-93, respectively). Like the BDP-95, the new BDP-105 has balanced analog outputs along with a host of other upgrades. These upgrades apply to both of the new models, the BDP-103 and BDP-105, respectively.  Our review of the BDP-105 focuses solely on analog audio performance since the HDMI audio and video performance between the new BPD-103 and BDP-105 players are identical and have already been covered in our BDP-103 Video Review.

The BDP-105 does come with a slightly higher price tag of $1,199 than its $999 BDP-95 predecessor and is more than double the price of the new BDP-103 model. Is it worth it? Let’s take a deeper look at the analog performance of the BDP-105 so you can answer that question for yourself.

For the BDP-103, Oppo hired the designer of one of the popular BDP-93 aftermarket modifications to help them improve its analog audio performance. The new design is said to have a warmer, more open and lively sound comparing to the BDP-93. This was achieved by a novel configuration of the Cirrus CS4382A 24 bit DAC and a new analog buffer and filter stage following the DAC output. The same designer also contributed to the BDP-105’s analog audio section. The BDP-105 is said to retain the BDP-95’s very detailed and accurate sound, and the performance measurements are almost identical to the BDP-95. The BDP-105 uses the same dual ES9018 Sabre32 Reference DAC chips as the BDP-95. In the BDP-95, they ganged the 4 pairs of the stereo DAC outputs to increase the current output.  The higher current output enabled them to use a smaller current to voltage conversion resistor, and a smaller resistor has less thermal noise than a larger resistor. In the BDP-105, Oppo initially tried to use the same ganged DAC outputs design, but found that the performance became worse.  The additional USB DAC, coaxial, optical input and headphone output made it impossible to design an optimized PCB layout if they continued to stack the DAC channels.  The suboptimal layout was the cause of the degraded performance.  After many attempts and revisions, Oppo decided to no longer stack the DAC channels.  The new design assigns one pair of DACs for the RCA output, one pair for the XLR, and two pairs stacked for the headphone amplifier.  The new configuration allowed Oppo to create a clean layout that minimized the interference and crosstalk.  The downside is they lose the benefit of the lower thermal noise from the I/V resistor, but by beefing up the power supply and separating the stereo and multi-channel boards, Oppo was able to maintain the excellent bench test performance.  The BDP-105’s stereo audio specification is listed to be the same as the BDP-95, and their internal test results actually show that the BDP-105 is slightly better. This design approach resulted in increased cost and manufacturing complexity, but enabled them to better route the signals, power and ground so they could ensure a high level of performance for all modes of operation.

For more information on this chipset, see:

Unlike the BDP-95 player that utilized a ventilation fan on the back panel, the new BDP-105 player utilizes passive cooling only. This was accomplished in two ways: reducing heat generation and improving heat dissipation. The new dual-core SoC produces less heat than the previous decoder chip thanks to its advanced semiconductor fabrication process. Oppo added a separated winding to the new Toroidal transformer so they could get +5V and +3.3V power for the analog section from low voltage drop regulators instead of from the +15V rail. The BDP-105 chassis is taller so it has more volume for air space and is slower to heat up. The ventilation grilles on the top, bottom and back of the player complete the passive cooling design by allowing cool air to come in and warm air to escape. This was a welcome improvement as I was sometimes able to hear the cooling fan turn on in the BDP-95 in my acoustically controlled theater room. Lowering and preferably eliminating all mechanical noise sources in my listening space is always of paramount importance.

*For your convenience, we've included a link to Amazon.com to buy this product. As an Amazon Associate, Audioholics.com benefits from qualifying purchases.
Like This? Check out our other Ultra HD Blu-ray and DVD Player Reviews!