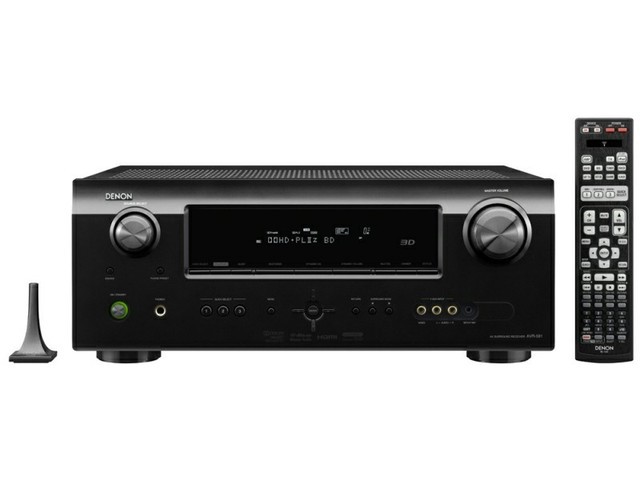 Launching a new receiver line is tricky business. The key is to give the consumers slightly more than they expect (or at the very least more than your competition is offering) at a particular price point. Then, you need to allocate specific features so that the next receiver in the line has something to entice buyers. In a perfect world, you'll get people to spend right at the top of their budget because the feature set on that receiver is something they really can't live without (though they'll still wish they could afford the next one in the line).

Denon's new line of receivers is striving to do just that. Their entry level, the AVR-391, already sports functions that we haven't seen on any other receiver in its category. With a $250 price point, you know Denon had to cut some corners. The question is, what does the next receiver in the line offer that the AVR-391 couldn't. More importantly, are those features attractive enough to encourage people to buy?

First let's start with the basics. The AVR-391 had a lot going for it and the AVR-591 nicely builds upon that platform. It possesses the same HDMI 1.4a inputs, with four inputs and one output. Users should have everything they need to cover their high definition devices. The number and types of analogue inputs includes a single component video, one each optical/coaxial digital audio, and a modest number of composite video and stereo analogue audio inputs. S-vide, thankfully in our opinion, is nowhere to be seen. Basically, Denon is moving directly towards HDMI and not looking back. While we applaud this move (did we really need all those composite/S-video inputs?), we hope that general consumers feel the same. Also, the same Analog Devices 24-bit/192 kHz DACs are included.

For the first time in the line, the AVR-591 overlays an on-screen display via HDMI. This means you won't have to change inputs or use the small LED readout on the front of the unit to set up your receiver. Also, all the HDMI inputs are 1.4a. HDMI 1.4a guarantees that the receiver will work not only with 3-D games and Blu-ray discs, but also all the anticipated broadcast (cable/satellite) formats. There is still some debate as to whether 1.4 will be able to do this as well (we think "yes" but if you're unsure, 1.4a is the way to go... at least until they release "version 1.512b" and change the rules yet again).

Of course, since the AVR-391 could decode high def audio formats including DTS-HD Master Audio and Dolby TrueHD, the AVR-591 can as well. While this isn't a huge feature for those that decode at the player or who don't mind using uncompressed PCM audio, it looks great on paper and that means more sales. It also means that you have a true one-cable solution... as long as you are using HDMI. More on that in a second. The AVR-591 (like the AVR-391) includes preouts for Dolby ProLogic IIz height channels or Surround Back speakers. This is a great boon for those that have external amps and want to have the ability to upgrade to a larger room or just play with the height channels for the larger soundstage.

Now we get to the differences. Like the AVR-391, Denon's AVR-591 sports five discrete equal power amplifiers (though it, of course, shares a single power supply). This time instead of 75watts per channel, the AVR-591 is rated at 120 watts (6 ohms, 1 kHz, .7% THD). This is a HUGE jump in power and one that actually puts the AVR-591 above the competition (at least on paper). Of course, since they rated the amps at 6 ohms instead of the traditional 8 ohms, this is a slightly inflated number (depending on how the competition chooses to rate their amps).

One convenience feature we loved seeing is that the AVR-591 upconverts all analogue video signals to HDMI. This is where your "true one cable" solution comes from. No longer will you need to run a cable for each input type to your receiver and television. While we know this can cause problems with rhythm-based games like Rock Band and Guitar Hero, for the most part people will love it. It really simplifies your life. Also, while the AVR-391 was 3D ready, the AVR-591 also enables the other features of the HDMI spec - namely Audio Return Channel and CEC support. CEC is the implementation of (remote) control signals over HDMI and is something that most people aren't aware of and don't use. More interestingly, however, is the Audio Return Channel. ARC allows audio to be sent both up and down the HDMI cable. That way if you have your cable signal pumped directly to your display, you can connect a single HDMI cable and get the picture up to the display from the receiver and audio from cable programming back down to the receiver. In the past, you had to run a separate digital audio cable (typically optical TOSlink). We have yet to see any televisions implement this technology, but when they do it will be a great feature to support.

One thing you may have noticed in the picture above is the pyramidal mic. Those of you familiar with Audyssey will recognize it as a setup mic. These mics accompany many Audyssey equipped products and are used during the Audyssey calibration and system setup. You're probably thinking that the Denon AVR-591 has some basic version of Audyssey. You'd be wrong. For the first time ever, a receiver at this price point has Audyssey MultEQ. We love economy of scale - it brings new features down in price and allows them to be implemented in lower priced products. The receiver also includes Audyssey's Dynamic EQ and Dynamic Volume. Dynamic EQ is designed to keep the frequency response stable across volumes and Dynamic Volume keeps the volume constant across time. The latter is important when you are viewing dynamic material when people are sleeping or if you just don't like getting blown out of your seat when a local car commercial comes on.

So, if we've got this straight, you get more power, more HDMI features (Audio Return Channel and CEC), analogue video upconversion to HDMI, HDMI OSD overlay, Audyssey MultEQ, Dynamic Volume, and Dynamic EQ. Is that enough upgrades to shell out an extra $100 over the $250 AVR-391? We definitely think so. Denon's AVR-591 might not be as inexpensive as the AVR-391, but the feature set is absolutely justifies the increased price. We love the number of convenience features they've included. The HDMI upconversion and OSD probably would have impressed us. The Audyssey MultEQ floored us. This receiver is scheduled to be released this month. We're betting it's going to be a big seller for the electronics giant.

scott911, post: 715174
My understanding is that it's traditionally a very real, honest number. Even when I wasn't too into audio, I know that you could often trust a “lower” denon number to be more powerful than someone else's fudged wattage number.

What will they do when brand x responds by also listing power in 6 ohms, start listing wattage into 4 ohms? stupid.

I don't think these low-end receivers are, or will ever be capable of driving 4 ohms speakers.

Does anyone know what video processing the AVR-591 uses? I'm presuming it's something like Anchor Bay or HQV but I couldn't find any reference to it here or on the Denon website.
anamorphic96 posts on May 05, 2010 16:47

scott911, post: 715174
My understanding is that it's traditionally a very real, honest number. Even when I wasn't too into audio, I know that you could often trust a “lower” denon number to be more powerful than someone else's fudged wattage number.

What will they do when brand x responds by also listing power in 6 ohms, start listing wattage into 4 ohms? stupid.

My understanding is that it's traditionally a very real, honest number. Even when I wasn't too into audio, I know that you could often trust a “lower” denon number to be more powerful than someone else's fudged wattage number.

What will they do when brand x responds by also listing power in 6 ohms, start listing wattage into 4 ohms? stupid.
Post Reply