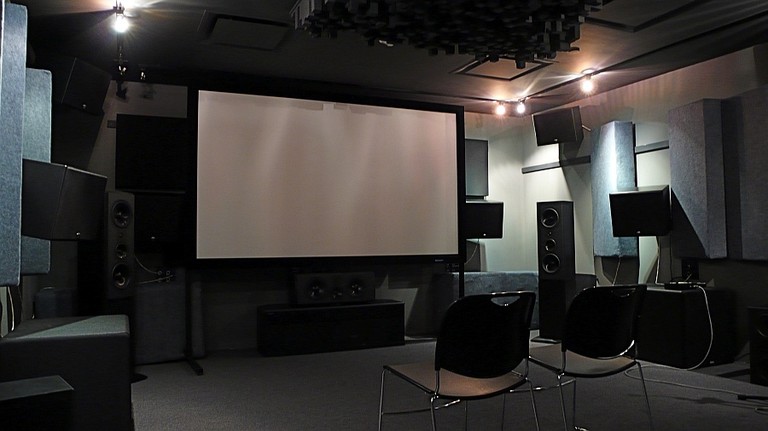 Audyssey as a company is sort of a brain trust that creates and licenses signal processing solutions.   They employ the sciences of psychoacoustics, acoustics, signal processing and use highly complex mathematical algorithms to put those Mega Flop DSP chips to work to do dynamic equalization and derive extra channels for surround sound.  It would be difficult to talk about Audyssey's 7, 9 or 10 channel DSX, or surround sound of any stripe without mentioning Tom Holman.  For those of you who have never heard of DSX, Audysseys new wide channel Dynamic Surround eXpansion,  or THX, or "5.1",  you may have been cave residents for the past 35 years, because that is how long Tom Holman, Chief Scientist for Audyssey  has been influencing the Audio Engineering business with his fundamental scientific discoveries and innovation.  He is joined in that effort by Professor Chris Kyriakakis, Chief Technology Officer, Dr. Sunil Bharitkar, VP of research, Philip Hilmes, VP of Engineering, Michael Solomon, CEO, and Neal Osterhaus VP of finance and operations.  Short bio's for all these key people can be read at: http://www.audyssey.com/aboutus/index.html On Wednesday, May 27th, members of the Audio Press community gathered at Audyssey's offices in downtown Los Angeles, a short drive from USC.  We were there to attend two demonstrations in downtown Los Angeles.  After meeting at Audysseys offices, we went to USC, where the days first demonstration began at USC in the Viterbi School of Engineering building.  This houses the Immersive Audio Laboratory, part of the National Science Foundations integrated Media Systems Center (IMSC).  This is a multi-million dollar multimedia room, the quietest room in all of the USC campus.  I  I had expected to be exposed to new products and get the soft sell on their products to view and review them in a favorable light.  I was wrong. Instead I got an education on surround sound.  There was hardly a mention of product, and to my delight, the demonstrations and tours concentrated on basic fundamental principles of psychoacoustics and multichannel sound reproduction.  This tour was given by Tom Holman and Chris Kyriakakis, both of whom are USC professors. Professor Kyriakakis is the co-founder of the National Science Foundations integrated Media Systems Center (IMSC) and founder of the Immersive Audio Laboratory at USC.  IMSC has 28 faculty members, more than 250 research assistants, and a annual operating budget of nearly 10 Million dollars.  In reference to the work done at the Immersive Audio Laboratory, "The group here works at the intersection of acoustics, psychoacoustics, and signal processing."  The Immersive Audio Laboratory was put on a floor constructed to be about 3 feet taller than the other floors in the same building.  This was done in order to have sufficient ceiling height for a large listening space, and space enough above the high ceiling to route and isolate all the ducts carrying Air Conditioning.  When you enter this very large room, you will notice it is generously covered in acoustical treatments, and has 14 large speaker systems placed all about the listening space. (14 is actually 10.2 on steroids...)  All 14 are not used simultaneously, but rather some of these speakers are swapped between channels for reasons of comparisons of location and experiments.  The room is full of "diffusion, absorption and reflection killing" treatments.  They are strategically placed in areas to absorb and/or make diffuse reflections so that the surround speakers can supply the delayed arrivals the brain interprets as reflections that we use to interpret the size and characteristics of the acoustic space. These delayed sound arrivals are interpreted as the rooms signature even more than the actual reflections in this well treated room.  A multimedia room of this caliber would be suitable for billionaires and Movie Studio executives viewing movies prior to release.  It was an eerily quiet but very comfortable place to be.   This room was clearly designed by acoustics experts for exactly this purpose, multimedia and multichannel sound experiments. The Front of the Immersive Audio Laboratory Room at USC

Surrounded by 14 speakers, we got a demonstration of 10.2 channel sound that was quite compelling.  By turning off certain channels and repeating simple tracks such as a moving vehicle, we could hear demonstrable differences with the extra channels at work.  We had all the dimensions of width, height depth at our disposal, and the location of what we were listening to at the time was never in question.  To simply call it superb imaging is an understatement.  In order to eliminate what Mr Holman calls cross-modality, (one sense modulating another) the lights are slowly turned down so we heard our sound demonstrations in complete darkness.

The second meeting was held at Audyssey offices a few miles away in the heart of downtown Los Angeles.  The essence of both demonstrations was to reveal the same set of underlying facts.  Facts gathered throughout hundreds of hours of experiments, all designed to determine how it is we perceive space though cues in sound.  It is this formidable amount of data, when analyzed by computer that helps to create the mathematical algorithms used to create the palpable and believable sense of space in multichannel channel surround sound.  10.2, as it is called, is not being touted as an end all and be all in surround sound, but merely as the next viable and economically realizable step.  We were given quite a history lesson by Mr Holman.  As it turns out, the nomenclature "5.1" was first suggested by Tom in 1987 during an SMPTE (Society of Motion Picture and Television Engineers) digital sound on film subcommittee meeting, where a number of engineers were debating how to partition the resources on optical film and still create a surround sound experience.  5.1 was a new term for describing a pre-existing 6 track split surround format already in use on 70 mm film.  This was the MINIMUM number of channels necessary to give a sense of spaciousness.  5.1 was processed to minimize the data needed to encode it on film. It was never intended to be the OPTIMUM number of channels, but rather a compromise.  The again, admittedly, 10 discrete channels is not perfect either.  So how many is necessary you ask?  During our visit to USC, Mr Holman referred to the figure of 30 channels quoted by Jens Blauert in the book "Spatial Hearing".  If this sounds a bit extreme, in his book on surround sound Holman also references an English mathematician who suggests 1 million channels would be necessary and a gentleman from AT&T who thought 10,000 would do.  I strongly urge all the married guys reading this to make copies for the wife if she starts to complain about speakers taking too much real estate in her living room.  As we keep the notion of 10,000 channels in mind (and the wife at bay) we need be mindful of the idea that 10.2 channels appears to be a stop along the way, not the final destination in the surround sound journey.  That said, it is far and away a better surround sound experience than what most of us have become accustomed to.

Audyssey has, in addition to a great amount of in house expertise on the subject, some very well  founded opinions on the topic of surround sound, and those opinions take life in their standard for 10.2 surround sound.  Before I introduce 10.2 as if it were something new, and not simply something new to the market, I would like to point out in Holman's book titled "Surround Sound: Up and Running", he includes a graphical time-line to put Surround sound into historical perspective.  This time-line shows the introduction of 10.2 as early as 1996, before the DVD.  As Audyssey points out on their website, there are three basic requirements we need to meet in order to attain realistic reproduction of sound.

These three items correlate well with Holman's answer to the question; "What determines the bit rate needed for audio on media?"

As Mr Holman is quick to point out, any audio engineer confronted with the question, “what do you want to do with a higher bitrate?”; will always ask for more frequency range and more dynamic range because they don't know what to do with more channels.  "It's a new paradigm."  "Just to go to 192 KHz sampling rate to satisfy passing bats instead of human beings is pretty crazy, but adding channels is of very great value."  (For those readers not terribly familiar with flying rodents, bats have an ability to hear ultrasonic frequencies, the kind you can reproduce with a 192 KHz sampling rate).  In answer to the question what is 10.2?  Mr Holman replies "It is as far as we can push the market without people thinking we are crazy."

I shall wander away - to let U all drool forever - in the knowledge that digital ..
HOWEVER COMPLEX they try to eventually make that..
will always simply be ..
A BIT RATE MINOR SAMPLE..
(of the real thing)

admin, post: 588790
Audyssey as a company is sort of a brain trust that creates and licenses signal processing solutions. They employ the sciences of psychoacoustics, acoustics, signal processing and use highly complex mathematical algorithms to put those Mega Flop DSP chips to work to do dynamic equalization and derive extra channels for surround sound.

((( audioholics OWN back reference web address -?- has been deleted “here” because I think the web address BACK to this article had blocked it's posting .. but why that would be a problem - evades my limited knowledge of computors? )))

;-)
Anyway …
It never ceases to give me great enjoyment ..
As I'm pleasantly sitting away back (down_under)
Just watching from here … “in”
New Zealand
…
To see the never ending QUEST - of the so-called BIG NAME BRANDS .. constantly fighting over - whom can create the biggest VIRTUAL .. surreal (ALMOST REAL) - digitally sampled rendition - of the real thing..

Where THAT is:-
The original true sinosidual analogue surround sound waveform

But (slowly) getting (towards) there ..

I don't care .. because they will ALL have to go back to analogue .. to even come close - to my 64.77million chs in a “complex” Total Spherical Surround sound system .. the old school way…
;-)
Thus - ?
I amuse myself .. watching the scrambles such as this .. with the hype .. of

Analogue is real & it's natural
(and it is NOT a digitally sampled version)
.. it simply exists .. naturally ..

Just a small system really ?
Such … as I actually would LIKE to buy the planet “PLUTO”
(and)
Then blow_it “into” outer space
with an enormous “all_over_surface” 64.77 million chs
(as at least that many speakers would be required)
.. or doubled that- if all chs had two way crossovers..
? 129p54 million - then whoomf - & ? Where'd “pluto” go??

HookedOnSound posts on June 29, 2009 23:24
With so many speakers, what would be the required for the ceiling for the “height” speakers? We're dealing with angles, so I'm assuming that the further your listening area is from the source than the ceiling needs to be higher but let's say for a distance of 10 ft. from a TV, any guess about the ceiling height required?

Also, with the added speakers, would smaller speakers but in greater numbers still offer enough dB output or “loudness”?

Budget aside, I can't imagine convincing my wife to let me install so many speakers in our living room

so would you just use surround speakers for all except the left, right, center and subwoofers? or will there be special speakers for width, hight, rear, etc.
Post Reply