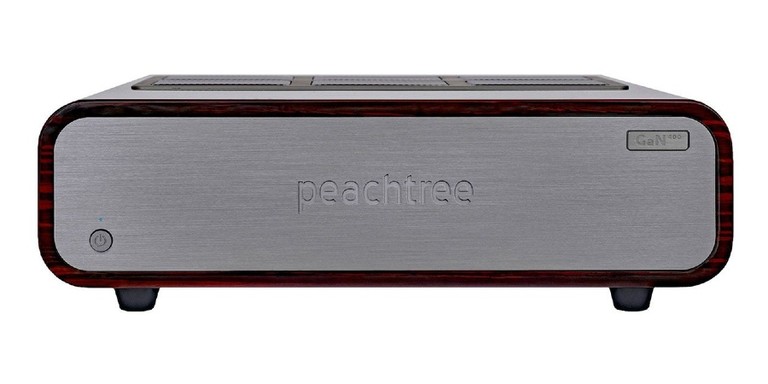 The Class D amplifier was born in the middle of the 20th century, but didn’t begin to reach its full potential until much more recently. Over the last 20 years, the performance of Class D amplifiers has been advancing by leaps and bounds. While this Class D renaissance can be attributed largely to the work of skilled and talented designers, such as Bruno Putzeys, some credit must go to the constant, decades-long evolution of the silicon MOSFET (Metal-Oxide-Semiconductor Field-Effect Transistor). As transistor device technology incrementally improved, designers were able to achieve better and better results. But in recent years, improvements in MOSFET technology have plateaued as transistor performance got ever closer to the theoretical limits of the materials and processes involved. That’s where the GaNFET (Gallium Nitride Field-Effect Transistor) enters the picture. Gallium Nitride transistors have physical properties that allow them to outperform silicon-based MOSFETs in a number of key areas, including switching speed and on-resistance. (The resistance value between the drain and source of a MOSFET during operation is called the “on-resistance” or “on-state resistance.” The smaller this value is, the lower the power loss.) GaNFETs boast both smaller on-resistances and significantly faster switching speeds than silicon-based transistors. Class D amplifiers require fast switching speeds in order to accurately recreate audio waveforms, and GaNFETs offer switching speeds up to 1,000 times faster than silicon-based FETs. On paper, GaNFETs are nearly perfect, and they are driven in the same way as conventional MOSFETs, so they’re not difficult to integrate into existing designs. Although still relatively rare in high-end audio, GaNFETs are gaining popularity as a substitute for silicon-based FETs, and proponents of this newer semiconductor technology believe that it will revolutionize the performance of Class D amplifiers. A Canadian transistor manufacturer called GaN Systems has gone on the record stating that a significant number of the world’s most noteworthy audio brands will be producing GaN-based amplifiers in the near future. There are some examples out there already, but most of them don’t come cheap. The Merrill Audio Element 114 Stereo Power Amplifier will set you back $16k, while the Mytek Empire Monoblocks cost $10k each. Now, Peachtree Audio has launched its first GaN-based product, the GaN400 stereo power amp. Priced at a more approachable $3K, the Peachtree GaN400 promises to drive any speaker with ease while delivering superlative audio quality.

The Peachtree GaN400 represents a next step in the evolution of power amplifier design and manufacturing. It has exceptionally accurate waveform reproduction, amazing power and control, low global negative feedback, and extremely efficient use of AC power. It provides the highest level of musicality without sacrificing the remarkable efficiency of a Class D design, and is proudly assembled in the USA. The GaN400 is simply the best sounding power amplifier we have ever made and compares favorably to the world's best power amplifiers regardless of their topology.

Peachtree Audio has never been afraid to embrace new technology. Years before Spotify launched in the US, Peachtree knew that the compact disc was on its way out. As a result, Peachtree was the first manufacturer I knew of that built USB DACs into all of its integrated amps, and even designed its early products to work seamlessly with Sonos (the only wireless multi-room audio platform available at the time). And from the beginning, the company excelled in combining performance, value, and an undeniable cool-factor, thanks to great design. In 2009, the Peachtree Nova was Stereophile’s Budget Component of the Year. Peachtree used ESS DAC chips before it was cool, and made the switch from Class AB to Class D amplification before most audiophiles had accepted the fact that Class D really can sound damn good. With the new GaN400, Peachtree once again delivers a forward-thinking product that looks like a million bucks but doesn’t cost an outrageous fortune. The amp combines a GaNFET-based output stage with an 850-watt RMS regulated power supply to deliver an impressive 400 watts-per-channel of power into 8 or 4 ohms. If you’re running low-impedance speakers, such as certain models from Wilson or Martin Logan, you might be pleasantly surprised to learn that the GaN400 can handle speakers with nominal impedances as low as 2.5 ohms (or as high as 16 ohms). Low-sensitivity speakers, such as the 84dB Magico A1 ($8,600/pair), can be driven “with the utmost ease and authority, while delivering a level of musicality and transparency that is extremely rare, especially in high output power amplifiers,” according to Peachtree. The amp boasts a fully balanced topology and low global negative feedback, achieving “sound quality that is remarkably faithful to the input signal.” The use of a new kind of output transistor may not appear to be an audio revolution in the making, but as Peachtree points out, MOSFETs have been the industry standard for more than half a century. In its time, the MOSFET revolutionized the entire electronics industry, and it is still the most widely used semiconductor device on the planet. Nevertheless, time marches on, and so must the humble transistor. GaNFETs have started to gain attention owing to their suitability for applications requiring high frequency, high voltage, high temperature, and high efficiency. Compared to their MOSFET predecessors, the GaNFETs used in the GaN400 can easily turn on 4 times faster, and turn off 2 times faster. These higher speeds translate to a massive reduction in switching distortion or “ringing.” We’re not talking about a modest reduction in switching distortion; this is orders of magnitude less. (If you want to get super technical, check out this whitepaper from GaN Systems, which shows that a GaN-based Class D amplifier can produce a total harmonic distortion as low as 0.004%, compared to a THD of 0.015% for a similar silicon-based amp.) In the case of the Peachtree GaN400, this reduction in switching noise meant that the designers could use far less global negative feedback, while still achieving excellent measured performance from the amp. (Feedback is often used to lower the measurable distortion of an amplifier, but some designers believe it can do more harm than good.) Peachtree claims that the GaN400’s low-feedback design yields “wonderfully natural-sounding music reproduction like the best tube amplifiers,” while at the same time offering “the tight bass, extended frequency response, and sheer dynamics of the best solid-state amplifiers. It really is the best of both worlds.” If that kind of subjective description leaves you feeling skeptical, here’s a cold hard fact for you to cling to: the Peachtree’s GaNFET-based design is incredibly efficient. Roughly 96% of the electricity it consumes is converted into usable audio power. That’s one reason why the amp can deliver so much power from a relatively small chassis. I’d wager that the output modules take up much less space than the 850-watt RMS regulated power supply. According to Peachtree, it uses top-spec parts to ensure high performance, durability, and long-term reliability. Equally bullet-proof is the amp’s input stage — with an input impedance of 100K, it can reportedly accommodate pretty much any preamp. (Personally, I’d be tempted to pair the GaN400 with a tubed preamp from Rogue Audio or PrimaLuna, and use it to drive a pair of big Magnepans.)

I will admit to being a Peachtree Audio fanboy in the company’s early days. I bought the cute little Peachtree musicBox integrated amp for my dad over a decade ago, and it still sings with his Monitor Audio speakers (though he has had to replace the tube a couple of times). I longed for the higher-end Peachtree Grand Pre, a gorgeous all-metal dac/preamp with a tube stage designed by the legendary Bascom King. When it comes to styling, Peachtree has always been up there with the best, and the new GaN400 is no exception. (The only small power amp that looks better to my eye is the impeccably curvaceous Gato Audio PWR-222.) But for the last handful of years, there hadn’t been a Peachtree product that really intrigued me. Class D integrated amps with built-in DACs are a dime a dozen these days, and Peachtree hasn’t kept up with the competition in terms of incorporating desirable features like built-in streaming, room correction software, and app-based control. (Peachtree tried to roll its own wireless audio platform to work with the company’s latest integrated amps, but ultimately gave up and struck a deal with Bluesound to package the amps with a separate Bluesound Node streamer.) With the GaN400 power amp, Peachtree was able to forget about keeping up with the Joneses in terms of features, and focus instead on blazing new trails in the pursuit of better sound quality. Peachtree Audio is once again at the forefront of an audio revolution.