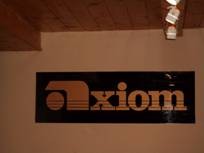 Axiom Audio is a company that needs little introduction since they are so well branded among the well- informed home theater crowd passionate about purchasing products that live up to their reputation - with none of the BS often found in high end audio. You won't find a product that they offer without full disclosure of its performance metrics which are measured in a controlled, precision method that dates back to the ground-breaking research done by Dr Floyd Toole, Axiom's own Ian Colquhoun and others at Canada's premier industrial research facility, the NRC (National Research Council) in Ottawa. Axiom Audio focuses itself on the science of audio and NOT the science fiction so readily espoused by many of their competitors. (You know the type: wishing to sell you the latest and greatest audio tweak or technobabble about how their speakers require hundreds of hours of break-in before an accurate assessment of their performance characteristics can be made).

We've had the good fortune of visiting our friends at Axiom Audio every summer to get the scoop on their new products under development. This year's On Location visit, however, had a slightly different focus - namely, Axiom Audio's commitment to research and development. Given the latest additions to Axiom's arsenal of test, measurement and production facilities, it's fair to say few companies in this industry are so well equipped in their efforts to design more accurate products and push the limits of the performance envelope.

During our last two consecutive visits ( On Location Tour #1 and On Location Tour #2 ), Ian drilled us with the NRC gospel of loudspeaker design, stressing that if a loudspeaker doesn't measure up, in terms of the family of curves discussed in the editorial below, it likely will not succeed in accurately reproducing music in normal listening rooms. Axiom can now carry out, in house, just the sort of research many other companies would have to tap the world-class measurement facilities at the NRC to accomplish.

Editorial Note on NRC Metrics and Design Criteria
According to NRC research, an important goal in loudspeaker design is that the end product be able to measure with both a flat on-axis response and with an even but constantly declining (or tilting) off-axis response. Ian is a firm believer in the family of curves (established by the NRC) to predict subjective and identify objective loudspeaker performance, which relates to:

From all these measurements, an average is generated and from the resulting data, the sound power curve is produced. If needed, polar response & the directivity index (DI) can also be derived from the data.

Free Field: [is] an isotropic, homogeneous, sound field free from bounding surfaces. Free wave (free progressive wave): [is] a sound wave propagated in a free field. A free wave can only be approximated in practice.
From: Acoustical Measurements, Leo L. Beranek © 1988

Measurements are, of course, an essential part of the loudspeaker design process. Certain stages of that process require measurement data which exclude, to the greatest practical degree possible, any undesireable curve-muddling acoustical artifacts. dB SPL amplitude response curves resulting from the measurement of a free wave propagating in a free field is the theoretical ideal, which as Beranek points out in his book can only be approximated in practice. The anechoic (literally, "without echo") chamber and tower measurements are two very effective means of approximating the theoretical ideal, especially when used in tandem, as does Axiom.

Last year Ian Colquhoun informed us he would be constructing a replica of the NRC Anechoic Chamber found in Ottawa . And that's exactly what he did - a duplicate chamber, built by the same company (Eckel Industries of Canada ( http://www.eckel.ca/ )) that assembled the original. The NRC crew would feel right at home.

After construction was complete, a comparative Axiom vs. NRC chamber performance assessment was made. As part of that comparison a mic correction curve was derived to ensure identical measurement performance. A photo of the chamber's associated test gear appears below left and on the right, peering into the chamber from the catwalk. More on correction or calibration curves in a moment.

Ian and Gene posing for a shot in the chamber with the Axiom M2 v2 "golden unit" (pictured left). Gene caught red handed attempting to steal the M2's from Ian (pictured right).

The platform seen in the left pic actually rotates a full 360 degrees. This allows for an easy and accurate way to do off axis measurements for plotting polar response curves of loudspeakers.

In addition to the anechoic chamber, Axiom installed a 30.5m (100') outdoor tower, used mainly for subwoofer testing. Why hoist a sub that high up, then measure? At that height the deleterious effect of boundary reflections are minimized to the point where their influence on the final, measured dB spl curves is negligible. Essentially, by hoisting the sub 30.5m up in the air and firing its acoustic output upward into all that clean Canadian airspace, Axiom takes advantage of a nearly ideal, anechoic free-field measurement environment, courtesy of Mother Nature. The amplitude response curves acquired using this method (so long as the weather and other environmental factors cooperate) are so "clean" they can be used to build mic correction or calibration curves. In Axiom's case they are used in conjunction with the Anechoic chamber to produce measurements that by Ian's estimation allow for response curves accurate to a dB or so, down to 20 Hz. (Necessary as the chamber by itself is not anechoic down to 20 Hz). The end result from using the tower & chamber in tandem is that Axiom's engineers can test their products, in-house, with a high degree of confidence that the results are indeed an accurate, objective picture of a system's performance.

The photo above left shows the tower. You'll note at extreme left nothing less Gene (in the red shirt) keeping an eye on a nearby white van loaded with loudspeakers. Above right is (from left to right) Axiom's Alan Lofft, Uncle Tom manning the golf cart (used as a hoist to lift the device under test to the top of the tower) and Gene, casting a vigilant eye on the day's proceedings.

Anechoic chambers are also a superb resource where it comes to measuring various forms of distortion. The effects of a room's acoustical character coupled with an often less-than-desirable noise floor can all too easily conspire to produce inaccurate distortion measurements. Those same measurements, done in a reflection-free environment, using properly calibrated mics against the comparatively low noise floor typically exhibited by an anechoic chamber expectedly produce superior results.

The THD+N test was used as an example as it was easy to set up. However, its usefulness in practice is limited. Can you tell which sub sounded more distorted? One sub had a cabinet leak that was quite easy to hear when the sub was run in an anechoic chamber, but under ordinary listening conditions was inaudible. Can you tell which had the leak? Here's a hint, it's NOT the product with the higher measured distortion profile. There exist other better focused approaches to distortion measurements than are traditionally used in the industry and an Audioholics technical article focused on this topic is now a work in progress. Stay Tuned!