Aperion Audio Aris Speaker at the 2012 Get Together Event 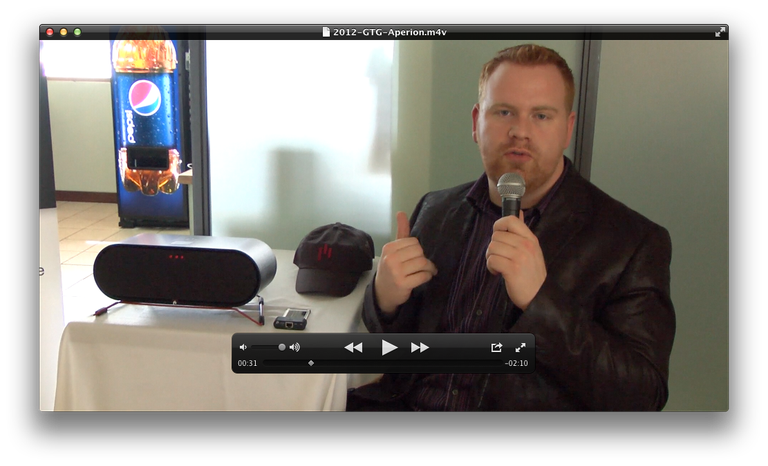 Aperion Audio Aris Speaker at the 2012 Get Together Event

Aperion Audio made an appearance at the 2012 Audioholics Get Together Event in Tarpon Springs, FL with its Aris Wireless Speaker for Windows. The speaker uses four active and two passive internal drivers, including a pair of 1" neodymium soft dome silk tweeters, two powered 4" fiberglass woofers and two 4" passive radiators. The frequency response is 65Hz - 20kHz.

We got a chance to listen to this speaker and it was really immersive and loud - in fact, the way it filled up the room we were in was quite impressive given its relatively small size. The Aperion Audio Aris has three different listening modes including Natural, Bass Boost and Enhanced Stereo. The mode we listened to the most is Natural - and the one you want if you want to get the best (most accurate) sound. If you absolutely want more bass you can certainly play with Bass Boost, but we'd leave it in the default.

With regard to wireless, this is the first officially certified Wireless speaker and it's compatible with both Windows 7 and 8. It uses their PlayTo wireless streaming technology so you can take music from any of your wireless devices and the Aris Speaker will show up on those devices so that you can stream music to it.

Now something Aperion Audio wants to point out is that they designed the Aris Wireless Speaker to also be "future-proof". There is a PCMCIA slot in the back where you can insert a card and allow this speaker to connect with different technologies. For example, this card that comes with it is Windows and also Ethernet, so that if you don't want to use WiFi you can use a hard connection. Bluetooth and Airplay are also on the horizon (AirPlay is slated for Spring of 2013), so Apple devices and straight Bluetooth are going to be supported natively as well.

The Aris comes with a red wire stand that angles the speaker either up or down and is optional to use (we think it looks cool). An 1/8" jack also ensures that you can also plug your portable audio device directly into the speaker if desired. The Aris retails for $499 and additional cards will be priced separately when they come out. Separating the speaker from the technology seems like a good idea for streaming systems. The key will be whether this is an enduring product with staying power so that it remains strong in the market to see the development of additional cards as promised.  We certainly hope so.

GranteedEV, post: 922899
that's… four drivers. Passive Radiators are just a helmholz resonator not unlike a vent.

agreed and I will update the article for correctness.
GranteedEV posts on November 14, 2012 13:22

that's… four drivers. Passive Radiators are just a helmholz resonator not unlike a vent.
Post Reply