Now that I have been home from the Consumer Electronics Show in Vegas for a few days, and have actually slept a little bit, I have had time to think back, remember, and reflect on some of the cool things I saw at the show.

As an Audioholic, I must assume that you, as an Audioholic, are interested in more than strictly audio and video gear. Walking around the floor - any of the multiple show floors of CES - is incredibly overwhelming. There are gadgets, gizmos and pieces of gear EVERYWHERE you look. It is nirvana for guys (and a few gals) like us. While my focus was home theater, audio and video gear, I couldn't help but slow down and check things out at some of the other booths. So what else was cool or entertaining at CES this year? In no particular order, here are some highlights from my list:

Laser Virtual Keyboard
Even though I had seen photos of this on the net before, I had to try it out. And it works! This widget displays a virtual (laser) keyboard on any surface, and you just type on it. I tried it hooked up to both a palm device and a pc. While not foolproof, it was pretty slick, and did actually work pretty well. For $179, this is about as sci-fi as you can get. Huge cool factor! (http://www.virtual-laser-keyboard.com/)

Swag
Love it or hate it, it is hard not to come away from the show with an extra 10 pounds of "stuff" in your luggage. (In fact, if you are a member of the press, you came away with luggage of sorts - a pretty decent backpack from Toshiba stitched with the HD-DVD logo. Which was handy for filling up with all the swag!) From the ridiculous to the very cool, many vendors are giving away stuff. Lots of stuff: T-shirts, hats, pens, blinky things, playing cards, keychains, lens-cleaning cloths, etc. And when you are lucky, a jump drive. I scored a couple of 1 gig USB drives, as well as several smaller capacity ones. One of my favorite scenes was the Vonage booth babes giving a hot-wheels style replica of the Vonage Van from the TV ads to any passing nerds & geeks that would sing the Vonage jingle (woo hoo, woo hoo hoo). And no, I did NOT sing the jingle. At least not out loud… 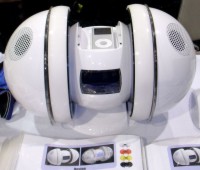 Miuro iPod Robot
I can find no practical rationale for this product from Japan, but it was oddly cool. A robot with 2 independent wheels and posture stability control that can stream music through the wireless LAN in your house, as well as be controlled from outside of the home is very cool, I'm just not sure what you would DO with it. The robot can receive input from several sources, including internet radio, an iPod, iTunes or WMP. It has 2 speakers (developed by Kenwood) on each wheel as well as a DSP mode that allows it to "achieve a musical effect even when put on the floor, and is capable of rearranging itself to face the best listening position for the user." Oh, and did I mention it can dance? They were demoing it to "Baby One More Time" by Britney Spears. I'm not making this stuff up, people… (http://miuro.com) 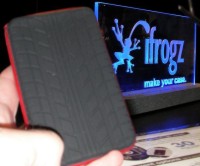 iFrogz TREADZ
Of the thousands of protective iPod cases everywhere you look, by far the coolest one out there is the TREADZ by iFrogz. It looks and feels like a tire tread, and provides excellent protection for the iPod and its screen. I want one. You will too when you see it. The entire line of iFrogz products is way cool. (www.ifrogz.com) 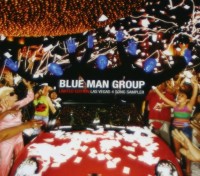 While trying to work my way through the thongs of porn stars and nerds (- wait, I meant THRONGS) in the hallways of The Venetian (where the Sands Expo is located), I saw a table set up giving out discount vouchers for the Blue Man Group show. Along with that, they gave me a great "limited edition" sampler CD. I have seen the Blue Men in NYC, but have yet to make the Vegas show. I have no doubt it is great, and the CD really rocks. We will have to make it a point to see the resident show next year. (www.blueman.com) 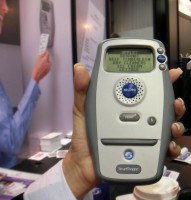 SmartShopper
The SmartShopper Grocery List Organizer might actually be the coolest practical gadget I saw at the show! I know I am opening myself up for all kinds of abuse on this, but my wife would LOVE one of these. Looking like an oversized PDA, you mount this thing on the fridge and whenever you think of something you need from the grocery store, you push the record button and simply say the name of the item. An LCD screen shows the list of items you have input, and when it is time to go to the store, hit the print button, and out comes your list, categorized!!! The unit has over 2500 items pre-programmed, and understands any voice. There are no ink cartridges to replace - it uses thermal paper rolls. The SmartShopper is way cool! (Do you think I can get Clint and Gene to let me review one?) (www.smartshopperusa.com)

Case Logic & Lowepro Bags
I am a sucker for a cool gear bag. Whether I need it for my MacBook Pro, my Digital SLR, my luggage - or all three combined, I am always on the lookout for a great bag. And when covering a show like CES, I need all of the above and up until now, I have not found the perfect solution. But there were some very cool bags at CES. As mentioned earlier in our live coverage, Case Logic had many new lines on display, including some great looking urban messenger bags, as well as some very well-built new rolling duffle-style luggage. 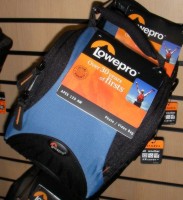 Lowepro was also showing some fantastic camera bags for everything from point-and-shoot digital pocket cameras to full-blown SLR kits. Their Apex line of bags all include the patented All Weather Cover, which is a built in rain-cover that is hidden away in a pocket until needed. It easily slips out and snugly fits over the entire bag to protect from the elements. They also had some great combo bags for computers and SLR kits. Bags from both companies had excellent build quality and looked great. 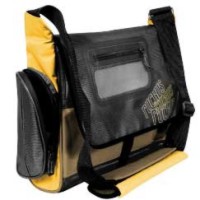 Of course, all of the Audioholics crew carried around Pacific Design Ruckus Laptop Messenger Bags and Backpacks which are like "Swiss Army" bags in that they have more pockets and compartments than you can shake a stick at. If you like nooks and crannies, we can highly recommend these for all of your portables and tech gadget storage needs. (www.caselogic.com, www.lowepro.com, www.pacificdesign.com) 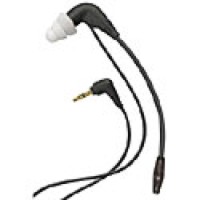 The Audioholics crew kept in touch with each other via cell phone using the Etymotic Ety•Com mobile phone headsets. In addition to being one of the clearest sounding headsets on the market, they also have the added advantage of making you appear to be part of a black-ops unit when used in conjunction with dark sunglasses. The Ety• Com combines an insert earphone with a close talking directional microphone that resulted in very clear two-way conversations despite the noisy CES show floor. (www.etymotic.com)

Belkin CushTop
Without question the one thing I saw that I must have. A product that is genius in its simplicity, the CushTop is a cushy laptop platform for you to use in bed, on the floor, on the couch, or anywhere that you use your laptop. It protects you from burning your legs and has a pocket for storing your power supply and mouse. When the Audioholics team hits CEDIA or CES, we spend all night in someone's room, spread out around the beds, chairs and floor with laptops burning our laps, posting until the wee hours of the night. My red-hot smokin' wife enjoys using her laptop at night on the couch while watching TV. And I have been known to follow my fantasy football teams on my lappy while watching a game in my home theater. This is the solution! It is really well made, and is just plain cool. My favorite widget from the 2007 CES! (www.belkin.com/laptopathome/cushtop)

So there you have it. My Audioholics list of non-Audioholic favorites from the show. Let me know what you think.