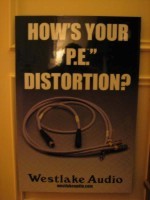 While the high end portion of the show historically resided at Alexis Park, this year it was conducted off site. I spent nearly the whole day at the Venetian hotel checking out the wondrous world of high end audio. The hotel was quite nice, both on the inside and out, but it proved too crammed for my taste strolling through the halls exploring the rooms of each exhibitor. I am hopeful next year it will return back to Alexis Park once it has been remodeled. The theme of this show remained the same as usual when it comes to so called "high end":

Of course the plethora of bad advice given by some exhibitors would place OPRA's job security in danger. I'm sure most of it is harmless and won't cause any long term damage like sticking your head near the woofers of your newly purchased speaker system for 8 hours a day at full volume for a week until they get properly broken in; or soaking your cables in kosher chicken fat blessed by a Rabbi before conducting any critical listening tests.

Occasionally there is a breath of fresh air to be found in the misty filled corridors of the high end show. During its brief emergence, it will literally disrupt the time space continuum and bring you into a delightful audio coma reminding you of how good this stuff can be when the poisonous snake oil element is left out of the recipe.

That being said, we found two such examples:

The Snell A7 Demo

We had a chance to demo these speakers off-site from CES at the Aladdin. The room had a convex shaped back wall and was wider than it was deep, making the primary listening area about eight feet from the speakers. Snell engineers cleverly used the room's natural elements to achieve the best possible sound with such items as a couch corner bass trap and heavy drapery on the front wall. The electronics consisted of upper echelon Marantz electronics including four monoblock amplifiers which were set up to biamp and bi-wire the system. They were spinning vinyl on the new Marantz turntable which was elegant in both looks and performance. This was the first and only demo where we experienced pristine Vinyl playback. The system was truly awesome and although Snell employed battery powered "cable jewelry" from Audioquest to connect the speakers to the amps, we absolutely loved the setup.

We were very impressed with the uniform soundstage the speakers presented across the entire listening area of the demo room. They had very well-controlled vertical and horizontal dispersion. The speakers conveyed a very open and airy top end reminiscent of some of the finest loudspeakers we've heard.

Clint also thought the most telling aspect of these speakers was its incredibly uniform tweeter dispersion. It also did this without resorting to fancy, esoteric multiple rear-firing drivers or any other gimmick to evenly distribute the sound throughout the room. Pacing back and forth, the imaging remained almost eerily locked in place - an extremely unusual characteristic in a full range loudspeaker system. These speakers sounded almost as if you were listening to them in a much larger room and any reverb or transient decays present on the tracks (such as the Paul Simon demo) were articulately relayed to the listening position (and the room in general it seemed). Very impressive. 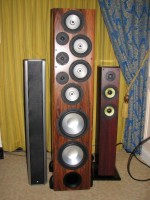 It was no surprise to us that the RBH's made it to the top of our list. We are intimately familiar with the sound of these speakers in various settings, including our own premier showcase system. RBH did a great job setting this system up within the confines of the Venetian room. The electronics were furnished by Boulder who makes some of the world's finest, and incidentally most expensive, electronics. Needless to say, the system reached unparalleled levels of dynamics and realism NOT found anywhere else at the show.

Clint DeBoer popped in towards the end of the day to listen to the T-30LSE system and heard much of the same crystal clear midrange that was exhibited in prior demos of this system. Imaging was good, however the effects of the room seemed to diminish some of the "room filling" sound we know these speakers are capable of. In his opinion, the Venetian exhibitors were hosed by the hotel which made it very clear that they could not move any of the key furniture in the rooms. Without the ability to control some of the acoustical properties of the rooms, several of the demos suffered from the same room issues. Even with this, the RBH system in particular presented a terrific almost nearfield demo that showed off its incredible bass handling and clarity. Plus, with the right amplifier these speakers can achieve near-concert levels, sans distortion - and that's just cool.

Tom Andry was particularly impressed with the lifelike bass response. One of the tracks was a classical piece that featured a lot of tympanis. It wasn't so long ago during Tom's "band geek" days that he had a short stint as the tympani player (mostly, he played bass guitar for the jazz band). But during this time, he learned, first hand, exactly how tympanis should sound. He swears that if he had been brought into the room blindfolded, he would have bet his bottom dollar that there was one in the room. This was only one specific example of how the RBH T-30LSE's got it right. We are used to making concessions during these listening tests for the room, environment, and poor layout. For once, we didn't have to.

For more information, check out our formal review of these speakers online now.

Since the RBH and Snell demos were located in different hotels, we were unable to declare an absolute winner. In our opinion, both were above and beyond anything else we heard at the show though there were some close runner ups that performed commendably well. One of these was a Canadian based company called Hansen Audio. The model was the Emperor which were massive in size and price ($60k/pair - 4x the cost of the RBH system and 2x the cost of the Snell system). We had an enjoyable listening session for the most part, though the company owner didn't warm up to us much after we answered his questions regarding the price of the products we typically review. I guess we aren't high end enough for his liking.

Some honorable mentions include Dali for auditioning a new pair of affordable tower speakers and Von Schweikert for one of their mid priced tower speakers. Both demos played well (not too loudly) and sounded excellent. I was quite impressed by the stereo separation and excellent high frequency extension of the Dali's. Their product line looks excellent and we are looking forward to engaging reviews of their products in the near future. 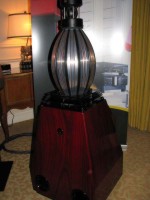 It was a blast visiting all of the exhibitors, especially a particular one whom was proudly playing the - um "music" of Grace Jones (gasp), on a Star Trek Nomad speaker system that sounded like a good channel on AM radio. I never thought Peter Gabriel's voice could sound so screechy and fatiguing until I listed to "In Your Eyes" on the speaker pictured here from MBL Audio.

Without the snake oil, or mainstream consumer marketplace, there wouldn't be a reference to establish truly high end performance. In that regard, we should applaud the mystical wonders of the exotic world of high end Audio and their efforts to push the envelope of performance for what they believe defines "high end". A double round of applause goes to Snell and RBH Sound for putting on demos of some of the finest sound at the show.