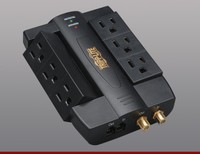 Tripp Lite has introduced a new twist (Get it? Twist?) to its surge suppressor line with the addition of two new innovative products: the SWIVEL6 and HTSWIVEL6. The SWIVEL6 and HTSWIVEL6 feature six rotatable outlets that swivel for more flexibility, making it easier to connect and organize electronic equipment. Additionally, the HTSWIVEL6 is slightly modified for home theater enthusiasts by adding coaxial and telephone/modem surge suppression to protect audio/video components from damaging surges and line noise.

Both the SWIVEL6 and HTSWIVEL6 include diagnostic LEDs that alert users to potential wiring or protection faults, helping prevent potentially costly damage. They carry a 1200-joule surge rating and offer up to $50,000 Ultimate Lifetime Insurance for connected equipment.

For more information on Tripp Lite's new SWIVEL6 and HTSWIVEL6 Surge Suppressors and to view the entire surge suppressor line, go to: http://www.tripplite.com/products/suppressors/suppressors-model-series.cfm