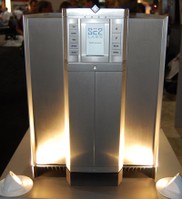 One of the more interesting products we saw at CEDIA this year was a product that combines all of the major components of a home theater system into one box.  The product is ready to go right out of the box - just hook up your speakers and display and you are good to go.

Upgrades and maintenance are easy, since every part of the ITC One is modular. All parts can be swapped or repaired with little effort – and warranties are provided for each component from the original manufacturer.

To provide a complete home theater setup, SE2 Labs has partnered with some of the industry’s most elite manufacturers, including Vidikron and Triad. These manufacturers have custom built ‘good, better, best’ speakers, projectors and screens specifically to be used with the ITC One.

The ITC One can even be customized for both residential and commercial applications, including corporate and education environments – providing all multimedia needs, even video conferencing, for the board room or class room.

With the ITC One, a variety of components that would normally take up rooms are reduced to a small box. No need to destroy walls for wiring, uproot carpets, or build unattractive display units that don’t integrate well with your home. The product was also designed to make an installer’s job easier. All installers need to do is connect the power, video source and speakers, and turn it on. That’s it. No cabling headaches, no racks, no integration worries. With the ITC One, you just plug it in and play.

An advanced mechanical isolation system protects the ITC One’s circuitry from airborne and mechanical vibration and keeps internal noises from escaping (such as a hard drive or transport). A sophisticated power conditioning system is preinstalled. Cable connections are recessed into the chassis, so you can push the unit against a wall without straining cable connections. The rear panel has lacing straps for wire management and stress relief.

Finally, the remote control for the ITC One is in a different league, with innovations like color volume feedback, remote locator beeper and RF communication. It is ergonomically designed and easy to operate. Buttons light up automatically in the dark when the unit senses movement. Each remote is tested with that individual system before shipping.

With 11 patents, the ITC One is the only high-end, all-in-one home entertainment system of its kind on the market today. The ITC One will be sold through custom installer dealers starting at an MSRP of $19,900.00.