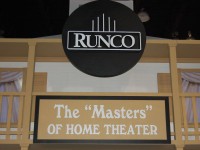 Looking to be the big dog in your neighborhood?  How about a 103" plasma display from Runco?  If you have the cash, Runco has the unit for you, and it is guaranteed to make you the most popular guy in town, especially during football season!

Runco introduced its 103-inch flat panel, the CinemaWall XP-103DHD at CEDIA 2007 this week. A true statement piece for the most discerning of home theater customers, the XP-103DHD plasma display brings world-famous Runco engineering and design quality to the ultra-large 1080p full-HD plasma category.