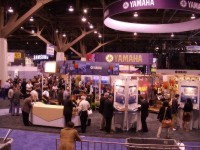 After finally getting a bit of CES 2006 coverage up, Clint and I tried a new tactic = the double team. That's right, one Audioholic was not cutting it and the "divide and conquer" play was spreading our forces too thin. After sending Gene off to conquer Alexis Park (the high-end, esoteric part of the show), Clint and I headed to the Central Hall - currently virgin territory at CES. The first day was spent covering all FOUR floors of the South Hall so the ONE floor of Central would be no match for the two of us… right?

First - Gene. Sending Gene to Alexis Park was the equivalent of sending a tank to fight in the dark ages. Gene is a literal warehouse full of information on proper speaker design, cable manufacturing, processor layout, and amplifier theory. Esoteric audio/video companies are chock full of innuendo, supposition, wives tales, and outright horse manure. How he kept a straight face through any of it is beyond me. Stories he told of what he saw borders on the insane (and inane). Keep an eye on the CES coverage page for descriptions. Look for sarcasm… and pictures of bottles of snake oil.

It is not like Gene didn't hear anything of value over there. Check out the Status Acoustics' Titus (winner of our Best of Show), the Italian-made Opera Callas Tebaldi speakers, or the Nola's from a New York-based company. Are they expensive - not to Bill Gates. Mercedes aren't for everyone, and some would argue that the performance increase over a, say, Camry or Accord does not justify the price but they do have their market. If Gene says they sounded good… well, I believe him. What would happen if I paid that much for a set of speakers…a long, slow, painful death at the hands of my Turkish wife. And believe me, she's not only capable, but, after 5 years of marriage to me, she's more than willing.

Clint and I hit Central Hall like a couple of baggy-pants teenagers trolling for giggly, poofy-haired girls. Between the two of us, we covered a lot of ground; Intel, Microsoft, LG, Panasonic, Sanyo, Samsung… I took the pictures while he chatted up the product managers. Did we run into our fair share of empty-headed marketing clones? Uh, yeah. Just a few. It is a wonder that these people can actually remember to breath. It seems to us that it would be common sense that, if you don't know the answer to a question, to find the person that does. Case in point:

One of our forum members is a HUGE MB Quart fan. He posts all the time. I've also heard the name Mission more than once on the forum. My goal was to make sure that I covered as many of the manufacturers that are chatted up in our forum as possible (who loves you?). When I saw the Mission/MB Quart display, I made a beeline. The marketing rep sitting at the little desk stared back at me with dead eyes as I approached.

ME: "Hi there, I'm with Audioholics. We are the largest publication of AV News and Reviews with over a million readers a month. We are covering the show live and I wanted to get some information about whatever new products you are showing here at CES."

ME: "Um…do you have an electronic press kit?"

ME: "M'kaaaaaaay…can you take me through what is new for CES this year?"

HIM: (points randomly behind him not bothering to get up or even look at what he is pointing to) "Yeah, um, I think that one over here has a new finish, and, um, those were redesigned this year or something."

ME: "Alllllrighty then…" walks out of booth .

Really, why did he even show up? There are two general reasons for a manufacturer to go to a show like CES, to show off new products to the media and dealers and start a buzz or to meet with dealers to give them info and training on new and existing products. Apparently, the Mission/Quart dude was there to take a nap or gamble or check out booth babes or…

Oh yeah, booth babes. More than one magazine I've read over the years has been flush with pictures of new products and pictures of booth babes in a 1:1 ratio. Part of me was a little more than intrigued at the prospect of the free show during the show. What I did experience was what amounted to a whole year's worth of Catholic guilt jam-packed into one weekend. Something about a scantily clad woman in a room full of press, dealers, and enthusiasts, under harsh lights looking bored was less than the voyeuristic pleasure I was expecting. At CEDIA, the booth babes were a rare and exotic sight… I could almost hear that Mutual of Omaha's Wild Kingdom Voice over, "Oh, here we have the rare Esoteric Audiophile-Grade Cable girl. Usually nocturnal, they lure their victims into snake oil money pits through insanely high markups, tight clothes, and surgically enhanced parts."

At CES it was more like, well, Vegas. Plastic, sterile, soulless, boring. None of them even looked like they cared that they were nearly naked. Completely un-phased. The companies would do presentations on a product and have them lined up behind them. Why? You've got me. I mean, I know it works. I know it will get guys to stop and look. But it is wrong. It is so wrong that I feel guilty for looking. Not guilty enough to stop looking, but guilty enough that I'm writing this as a penance. I'm a bad, bad man.

So, what was the highlight of Day 2? Was it the 3-D LG display? Was it the 103" plasma? Was it the 2k projector? Nope (though the 3-D LG display was hell-a cool), it was the massaging chairs. Man, after a day and a half, about a million miles walked, wall-to-wall people, and free flowing guilt… the only real pleasure was having your feet massaged by a chair. So what if 3000 people had sat in the same chair? So what that (statistically) at least one of them had athlete's foot? So what that there was a mysterious oily spot on the head rest? CES + Foot Massage = Good. Note to manufacturers: Want to get people in your booth next year? Get a whole bunch of these chairs. Or better yet, get a bunch of massagers. Preferably female… hey I got it, foot massaging booth babes! Uh oh, now I feel guilty again.